Second-graders given tour of upgrades at Wiesbaden 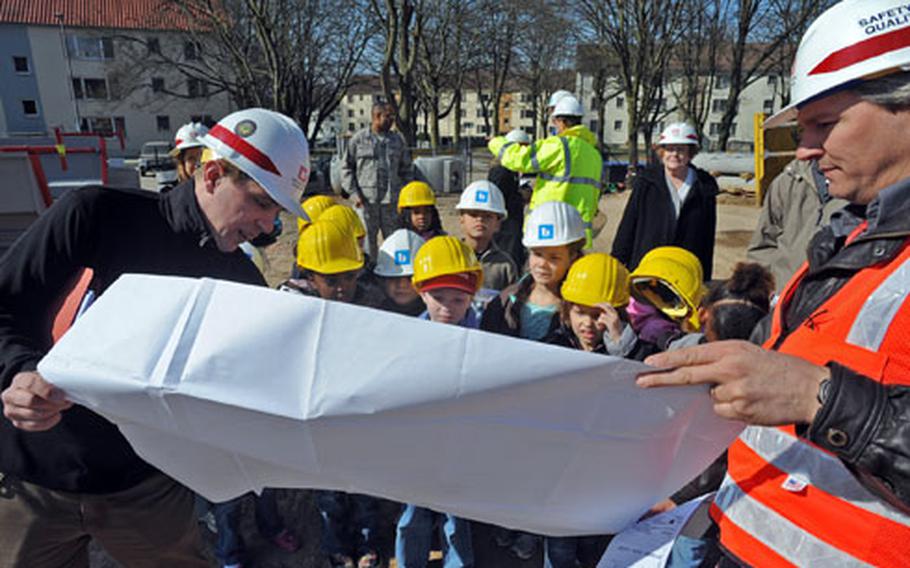 Ben Peschke, left, a project engineer, and Neil Ravensbergen, the resident engineer for the U.S. Army Corps of Engineers in Wiesbaden, Germany, show Aukamm Elementary School second-graders the plans for a new multipurpose facility for the middle school at Hainerberg housing area. (Michael Abrams/Stars and Stripes)

WIESBADEN, Germany &#8212; As a senior engineer for the Army, Neil Ravensbergen is accustomed to taking distinguished visitors on tours of construction sites.

He was at it again Tuesday, though his guests wore no stars nor showed much interest in budgets and timelines. Instead, they inquired about worms and elephants, hard hats and anything else that crossed their second-grade minds.

Ravensbergen didn&#8217;t flush, maintaining his composure much like he did minutes earlier when 8-year-old Gwyneth Reagin interrupted his spiel to announce with wonder that she had spotted an earthworm at her feet.

Over the past couple of years, a lot of earth at Wiesbaden has been moved around for a string of projects that will turn the Germany-based community into the hub for the U.S. Army in Europe. The estimated price tag is $500 million.

"In the next couple of years, you will see a lot of changes," Ravensbergen said as he guided the 15 children around Hainerberg housing area.

Ravensbergen, a resident engineer for the U.S. Army Corps of Engineers, also showed the Aukamm Elementary School class the outside of new lodging facility, due to open later this year. They also saw where a child development center will be built as well as a new bowling alley.

"What happens if he falls?" Jacob Stevens, 7, asked Ravensbergen after spotting a construction worker on top of the $32 million lodging facility.

Ravensbergen said measures are taken to ensure people are as safe as possible.

Jean Bochow&#8217;s class got a sense of that when it ambled up to the Wiesbaden Middle School&#8217;s multi-purpose facility now under construction. The kids were told to don a hard hat because they would be stepping onto an actual work site. That bit of news elicited a buzz of excitement, followed instantly by cries for a hat.

Stoking their imaginations, Ben Peschke, a project engineer, attempted to convey to the children the actual weight of the multipurpose facility. He spoke of metric tons and pounds and brought it down to their level by translating those hefty numbers into something fun and tangible, such as cars and horses.

Lauren Wells, a pigtailed 7-year-old, wasn&#8217;t satisfied with those analogies.

"How many elephants is that?" she asked.