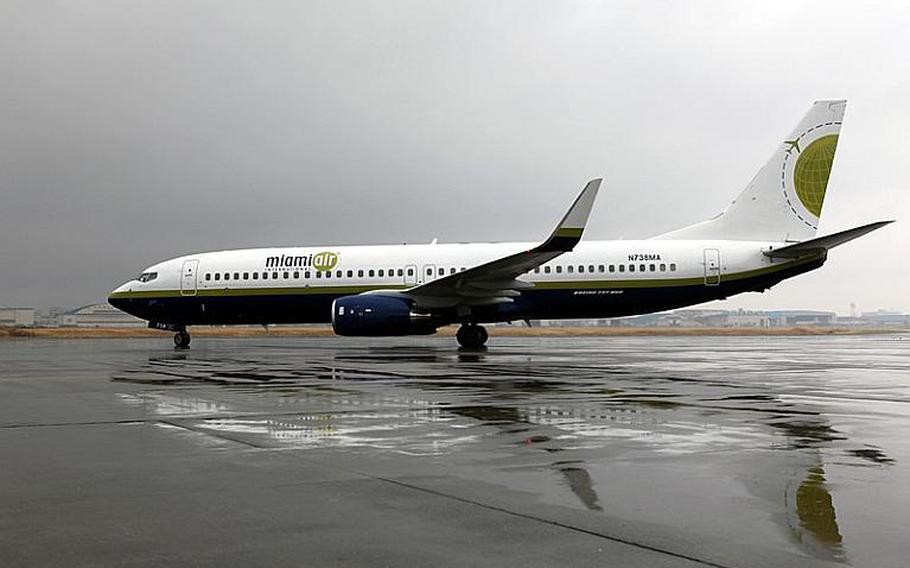 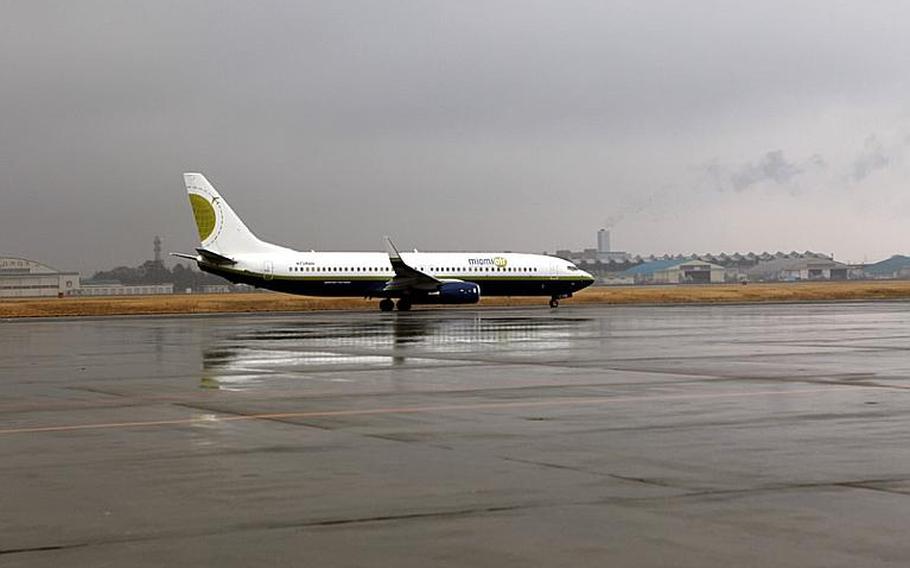 NAVAL AIR FACILITY ATSUGI, Japan &mdash; The first military-assisted flight out of the Navy&rsquo;s Tokyo-area air base lifted off about 12:40 p.m. Monday, with 153 family members bound for Seattle-Tacoma International Airport.

The flight was the second to leave since plans for military-assisted flights out of Japan for families of servicemembers were announced Thursday, leaving some wondering if the leisurely pace of flights would lead to fewer people leaving than anticipated.

More than 8,000 family members have signed up for military-assisted flights at U.S. bases in Japan, according to figures compiled by Stars and Stripes.

&ldquo;There was a sense of urgency on Thursday, and now it&rsquo;s just been ... slow going,&rdquo; Raquel Dondelinger, of San Francisco, said at Atsugi on Monday.

Dondelinger is slated for Category 3, meaning that hundreds of family members with children younger than her own will be called to leave first.

As of 5:30 p.m., no further flights out of Atsugi had been announced. On Sunday evening, Atsugi base commander Capt. Eric Gardner said he expected six flights to leave Atsugi this week.

No families were turned away from the Monday flight at Atsugi&rsquo;s Hangar 183. There was earlier concern that too many pet carriers might bump some families to later flights.

Misawa Air Base&rsquo;s first flight was scheduled to leave at 3 p.m. on Tuesday, according to base officials. There are 240 seats and 10 cargo holds for pets, along with space for three small pets. Final processing for that flight begins at 7 a.m. Tuesday at the base club.

A flight left Yokota Air Base on Saturday, but that flight was a regularly scheduled Patriot Express flight that was reassigned to transport military families leaving Japan. About 447 residents at Yokota Air Base wanted to leave Japan on voluntary departure flights by about 5 p.m. on Sunday, the base public affairs office said.

Of those, about 354 residents and 38 pets had been processed. A flight to the United States was expected Tuesday.

At Camp Zama, 420 residents had signed up for, base officials said Sunday.

While some people are clearly leaving out of fear and a desire to protect their family, others aren&rsquo;t particularly concerned about radiation, some base residents said Monday. Most servicemembers at Yokosuka and Atsugi are either deployed or preparing to support Operation Tomodachi, the U.S. military relief mission to assist victims of the devastating March 11 earthquake and tsunamis.

Meanwhile, the military is offering family members a free trip home with a daily allowance.

Kehrt says she understands the concerns of others. Nevertheless, she came to a different conclusion: Since her husband is not deploying and school is opening Tuesday, she believes it&rsquo;s better to keep her three children in their normal routine.

&ldquo;Now that my family decided we&rsquo;re staying, I feel a million times better,&rdquo; Kehrt said. &ldquo;The chances of something really bad happening are so low. If something really awful was going to happen, they could get us out in 24 hours.&rdquo;

Stars and Stripes reporters T.D. Flack and Travis Tritten contributed to this story.