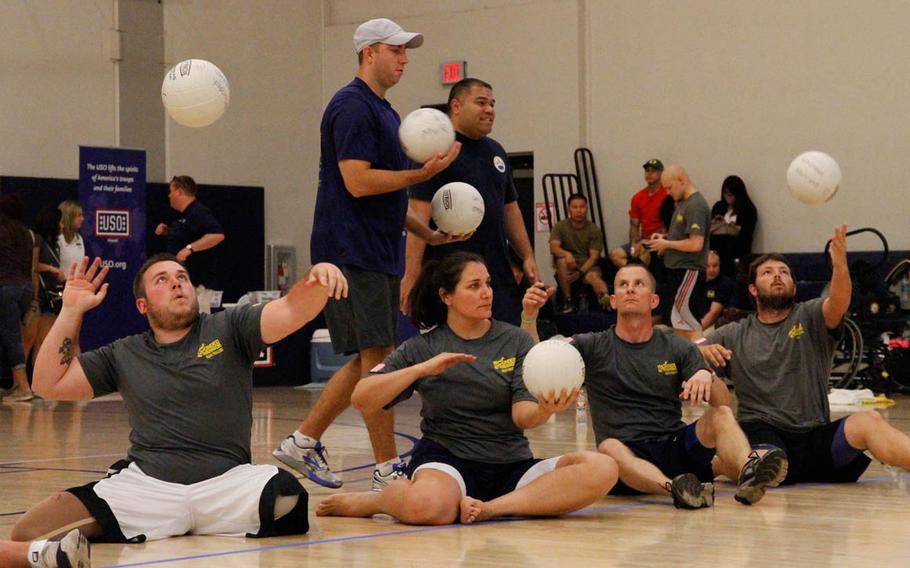 Buy Photo
Athletes demonstrate their serving skill while sitting during the 1st day of trials at Joint Base Pearl Harbor-Hickam, Hawaii, for the Warrior Games to be held in June 2015. 'Seated' volleyball equalizes the playing ground for athletes with missing or injured legs. (Wyatt Olson/Stars and Stripes)

Buy Photo
Athletes demonstrate their serving skill while sitting during the 1st day of trials at Joint Base Pearl Harbor-Hickam, Hawaii, for the Warrior Games to be held in June 2015. 'Seated' volleyball equalizes the playing ground for athletes with missing or injured legs. (Wyatt Olson/Stars and Stripes) 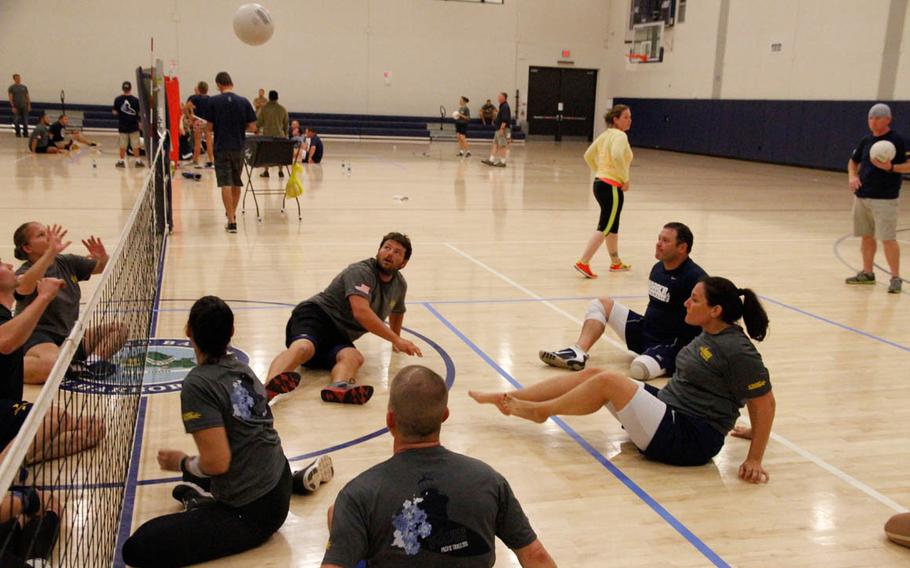 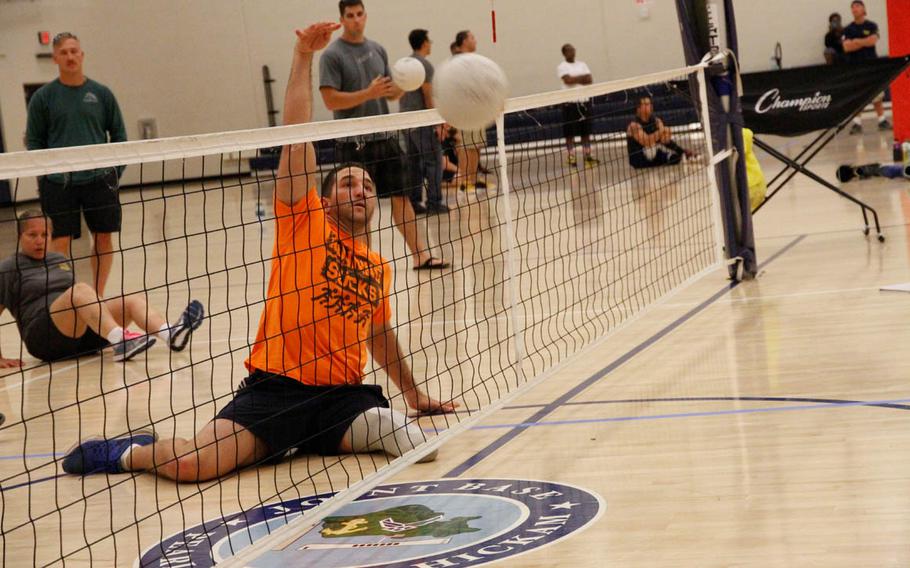 Buy Photo
Redmond Ramos, a former Navy corpsman attached with the Marines, spikes a ball over the net during try-outs for 'seated' volleyball at the gym at Joint Base Pearl Harbor-Hickam, Hawaii, on Monday, March 9, 2015. Selected athletes will compete in June at the Warrior Games. (Wyatt Olson/Stars and Stripes)

JOINT BASE PEARL HARBOR-HICKAM, Hawaii — Every gold-medal dream begins somewhere. For some athletes trying out for Wounded Warrior Team Navy 2015, it began Monday night with the sliding, scooting and tumbling that’s unique to playing “seated” volleyball.

“We had a great volleyball team for Team Navy last year in the Warrior Games,” Redmond Ramos, a former Navy corpsman, said during a short water break from volleyball drills at the joint base’s gymnasium.

“Seated” volleyball equalizes the playing ground for athletes with missing or injured legs.

The team pulled off an upset victory against the Marine Corps team and took the gold during the Warrior Games in October in Colorado Springs.

“It was an amazing experience,” Ramos said, one he’s hoping the next team will repeat.

Those who are chosen will represent the Navy during the multi-service Warrior Games competition June 19-30, hosted this year by Marine Corps Base Quantico in Virginia.

“What it’s really about — adaptive athletics as a whole — is the recovery process for the servicemember, being part of a team again,” Howell said. “Most of them were medically retired and so they may have lost some of that team spirit they had in the Navy, being active duty before. It’s really about recovery, even though it’s also about competition.”

Athletes have come from all over the country for the trials, he said.

“The first criteria is that you’re enrolled in Navy Wounded Warrior-Safe Harbor as a wounded warrior — either seriously ill, injured or combat-wounded,” he said. “Once you’re enrolled, you’re eligible for adaptive athletics.”

Based on an athlete’s schedule and ability to travel due to physical condition, those who can participate are invited to the trials, with travel and lodging covered by NWW-Safe Harbor, the Navy’s umbrella agency for caring for wounded, injured or ill servicemembers and their families and caregivers.

The plan is to alternate trials each year between the East and West Coast to “keep it equitable between the different fleets,” Breining said.

Beginning with the Marines this year, the Warrior Games will be hosted in round-robin fashion by each of the services, he said.

The athletes involved in the Hawaii trials first met with doctors and physical therapists who classified each of them based on their disabilities to determine the level at which they would compete.

It’s a grinding schedule, with athletes meeting first at 6:30 a.m., followed by a day of conditioning and try-outs ending at 8 p.m.

About 3,300 sailors and Coast Guardsmen are enrolled in the Navy program, Breining said.

“The big challenge we have is creating visibility for our program, letting the fleets know that we support not only the combat-wounded, which is about 20 percent of our population, but also non-combat serious illness and injuries.”

“A lot of the people on our team are Navy corpsmen so it’s really a cool camaraderie we develop in Safe Harbor and during the Warrior Games,” Ramos said.

And although the results of the trials won’t be announced until later this year, Ramos was confident that the strategy used to win gold in volleyball last year will work again.

“It was really playing the sport,” he said. “A lot of times we were trying to play the team, and you get nervous. You get anxious.”

Their coach cajoled them to “play the sport the way it’s supposed to be played,” advice that “forced us to calm down.”

“We have an amazing group of new athletes who are going to carry us to another gold medal,” Ramos said.