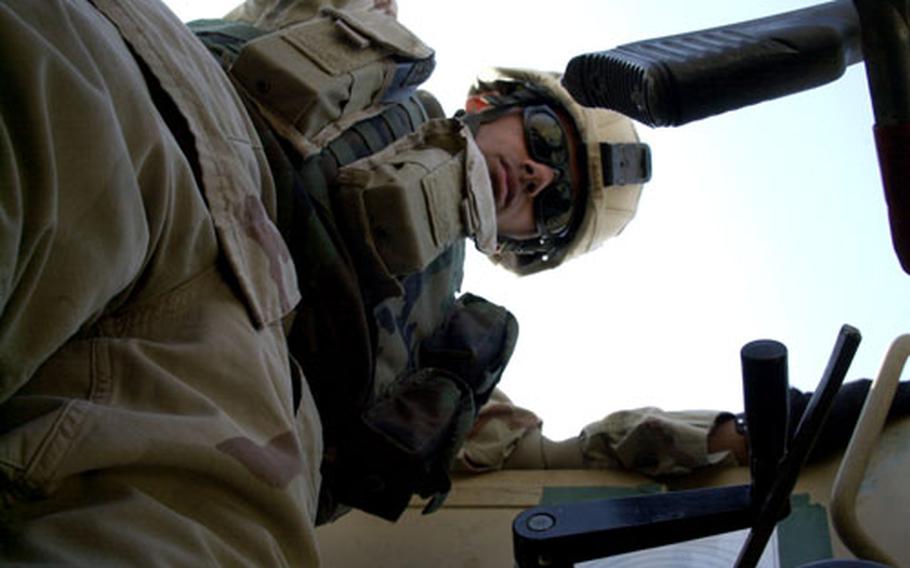 Gunners interviewed by Stars and Stripes all saw room for improvement of the Humvee. Pfc. Adam Ross, 19, assigned to the 1st Brigade Troops Battalion, 3rd Infantry Division at Camp Speicher, Iraq, wants to change the placement of the turret handle, making it easier to turn when sitting. (Erik Slavin / S&S)

Humvee gunners say there is another piece of equipment contributing to casualties: the gunner’s seat sling.

One of the main U.S. supply routes stretches hundreds of miles through the center of Iraq, running in sandy monotony near the Tigris River up to Mosul in the north.

“I remember there being just absolutely nothing out there,” said Sgt. Jennifer Scott, 26, a reservist gunner from Bossier City, La. In August, Scott’s four-vehicle convoy was on a one-hour trip back to Camp Speicher when an object flew at her from the left side, striking her hand.

For a second, she was puzzled; a second later, the heat blast hit. Black smoke shrouded the turret.

A bomb had exploded underneath the driver’s side of the Humvee, setting the spare gas cans secured to the back ablaze. Soldiers kept driving, then quickly extinguished the fire. While no one was seriously hurt, Scott clearly recalls how well the vehicle’s windows performed.

“We were really lucky,” Scott said. “The glass really worked. It took chunks of asphalt in the back window.”

The accident made Scott a believer in a transparent gun shield. But it also got her thinking about another component that gunners say contributes to casualties.

Scott sits on one of the new, wider slings issued within the past few months, but many gunners sit on what amounts to a seat belt strap.

Neither has a quick-release mechanism that would undo the sling during a vehicle rollover.

“It can be undone right now, but it’s difficult to do from a sitting position,” Scott said.

Some commercially available products, such as the Cooper Sling, include quick release functions. Although such products cost hundreds of dollars, they also provide gunners far more comfort. When gunners sit on slings that cut off circulation during long convoys, they are more likely to stand up and expose their heads to fire.

“Those straps are the most uncomfortable things in the world,” said Sgt. Benjamin Joress, 20, a Massachusetts National Guard gunner. “Your whole legs go numb.”

Some gunners roll up mats or tear couch cushion foam to pad the seat, Joress said. Another soldier sat on a wooden board attached to two sling straps during his all-day convoy from Kuwait to north central Iraq.

Gunners can be resourceful and don’t want to be seen as complaining, they explained, but they are concerned for their fellow gunners’ safety.

“We do what we can [to cushion the seat], but you’d think the military could do a little better,” said one gunner who did not wish to be identified. “It’s not just complaining about pain, because we expect soldiers to be able to handle that. It’s not just that, it’s a safety issue.”