Searchers increase efforts to find those lost in past wars 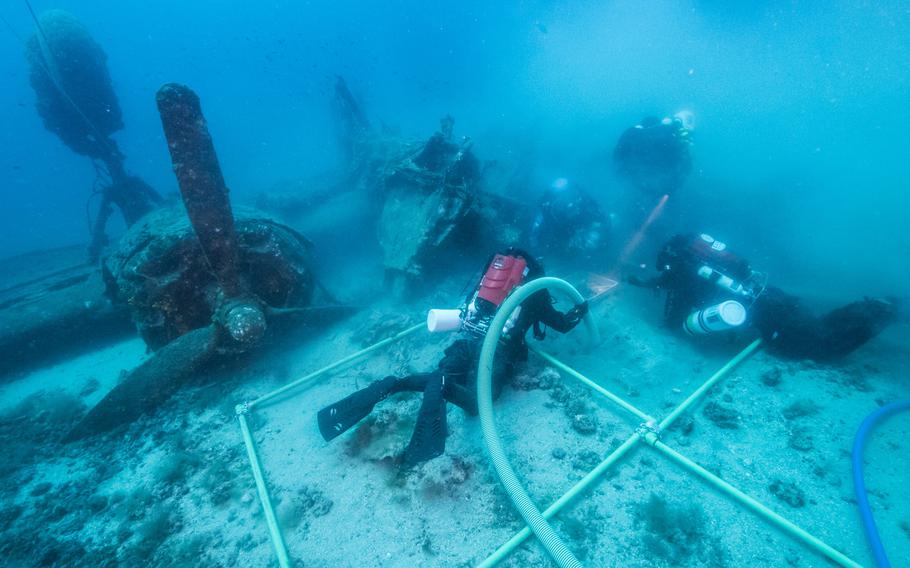 Divers conduct a mission for the Defense POW/MIA Accounting Agency to investigate the underwater wreckage of an aircraft located near the coast of Croatia in July 2017. DPAA conducts similar missions around the world in an attempt to locate, recover and identify Americans missing from past conflicts, including a renewed effort to account for missing World War II troops. (U.S. National Park Service photo courtesy of DPAA)

Divers conduct a mission for the Defense POW/MIA Accounting Agency to investigate the underwater wreckage of an aircraft located near the coast of Croatia in July 2017. DPAA conducts similar missions around the world in an attempt to locate, recover and identify Americans missing from past conflicts, including a renewed effort to account for missing World War II troops. (U.S. National Park Service photo courtesy of DPAA) 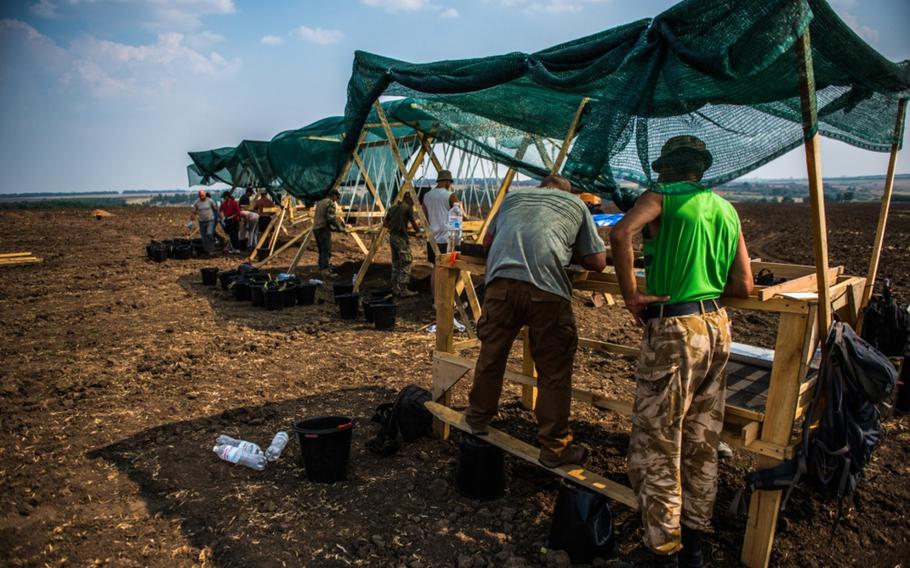 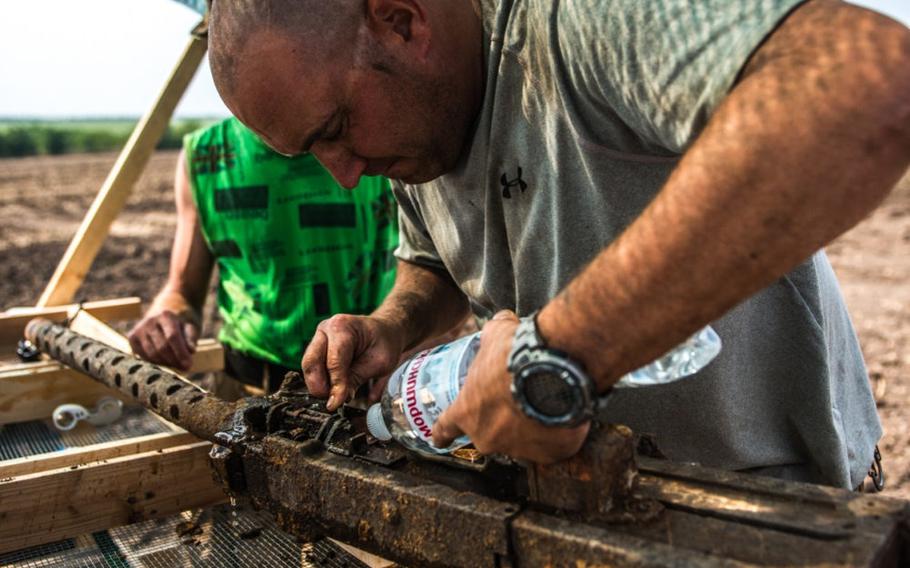 Air Force Sr. Master Sgt. Jeremy Raymond with the Defense POW/MIA Accounting Agency cleans a .50-caliber machine gun on July 28, 2016. The gun was mounted to an aircraft during World War II and found during a DPAA recovery operation in Novi Troy Any, Ukraine. (Courtesy of Eric M. LaClair/DPAA) 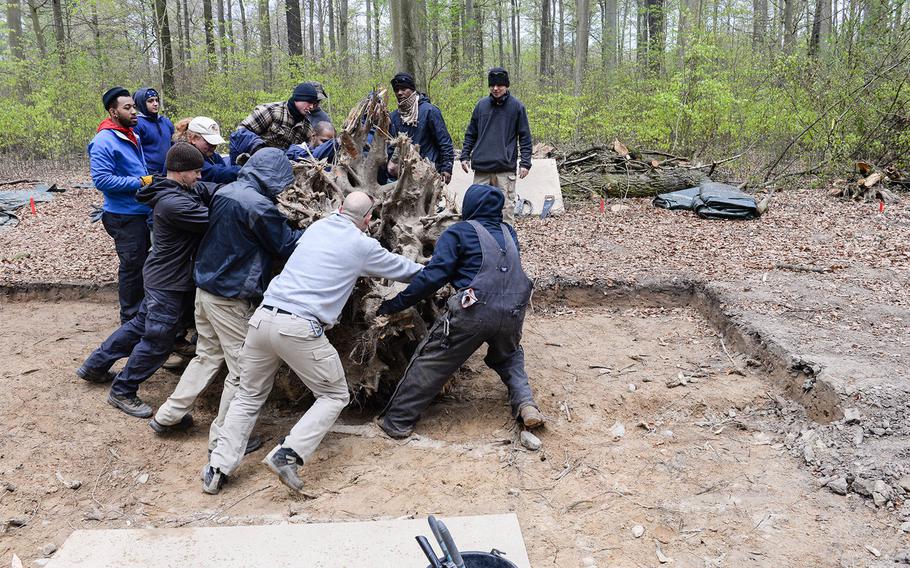 A recovery team with the Defense POW/MIA Accounting Agency rolls away a tree stump from an excavation site near Lindau, Germany, in April 2016. The mission eventually led to the recovery and identification of missing World War II pilot 1st Lt. William "Bill" Gray Jr. Gray's remains, found embedded in the tree's roots. DPAA has stepped up efforts to account for missing personnel from World War II. (Courtesy of Micaiah Anthony/DPAA) 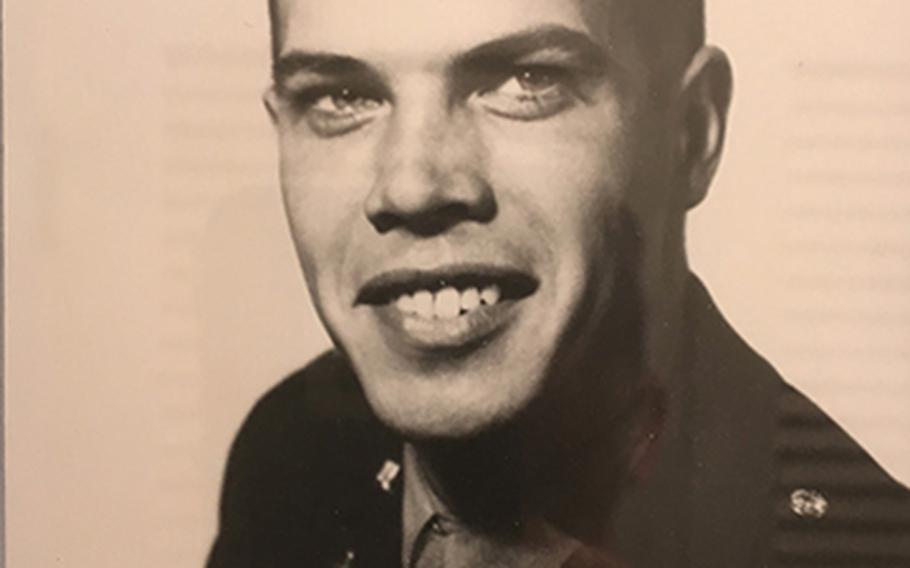 When Army investigators recovered his remains 71 years later, they found his bones embedded in the roots of a tree.

Gray was one of the first U.S. servicemembers missing from World War II to be recovered from Europe and identified after a major reorganization in 2014 of the embattled agencies tasked to account for the tens of thousands of Americans who never returned from war. The Pentagon-ordered merger created the Defense POW/MIA Accounting Agency, with one chain of command and one budget.

The return of Gray’s remains to his family in Seattle last year reflects the renewed push for DPAA to bring fallen World War II troops home from across the European and Mediterranean theaters and expand its focus beyond the Vietnam War.

In 2010, Congress expanded the scope of POW/MIA searches, mandating that the Pentagon resume accounting for servicemembers missing from World War II. Before then, DOD had been required to account for missing personnel from only as far back as the Vietnam War.

The original mission “largely is because of families (from) the Vietnam War pressuring the U.S. government to find the missing Americans” after the war ended in 1975, said Rear Adm. Jon Kreitz, DPAA’s deputy director. At the time, some of the missing were believed to still be alive.

“I’m very happy to see that the government said, ‘You know what? There are not just Vietnam (War) families that have … voids that they’re trying to fill.’”

In the shadow of much-anticipated remains coming home from North Korea just last week, the renewed effort in Europe to find those lost from World War II is paying off as well.

Competing for funds As part of the broader mission, DPAA in 2015 stood up its first European Detachment at Miesau Army Depot. The office is at the forefront of accounting efforts for more than 22,000 Americans missing from World War II in 37 countries across Europe, the Mediterranean and North Africa.

Army-led recovery efforts to find and return those Americans ended worldwide in 1951. In Europe, Army mortuary and DOD teams did sporadic recoveries, but only in response to reports of possible American remains being found, a reactive rather than proactive approach, Kreitz said.

“One of the reasons for the new mandate in … 2010 was the perpetual DOD dilemma of having to divert funding and staff from programmed activities in Southeast Asia,” said Niall Brannigan, the director of DPAA’s Europe Detachment.

From World War II through the first Persian Gulf War, nearly 83,000 servicemembers remain unaccounted for; 72,000 of those are from World War II. But the agency’s focus is still on Southeast Asia, a priority reflected by its allocation of resources, Kreitz said, and driven by a race against the rapid decaying of remains in the region’s acidic soil.

Also in Asia, the agency is poised to restart operations in North Korea, which President Donald Trump and North Korea leader Kim Jong Un committed to during their recent summit in Singapore. Recovery efforts for the 5,300 unaccounted-for remains in North Korea last took place in 2005. Just last week, North Korea returned what it says are the remains of 55 American soldiers killed during the Korean War. Identifying the remains is the next step, a process that could take years.

DPAA’s $146.3 million budget for the current fiscal year was approved in late March, almost double what it was five years ago. Less than $6 million is allocated to the Europe-Mediterranean Directorate, under which the Europe Detachment falls, Brannigan said, though the office is expected to receive a portion of the $10 million that DPAA has set aside for partnership missions.

Along with a major organizational overhaul, the congressional mandate of 2010 called for what was then the Joint POW/MIA Accounting Command to account for 200 personnel annually by 2015, with guidance “to encourage us to continue to increase that,” Kreitz said.

The agency is still short of that benchmark but its numbers are increasing. In 2016, DPAA accounted for 164 sets of remains, and in 2017, its first full fiscal year, the number rose to 183. Europe’s share last year was 31.

In the decade before the reorganization, DPAA was accounting for 71 to 74 personnel on average worldwide each year, Brannigan said.

Partnerships and technology DPAA is increasingly leaning on partnerships with universities and outside researchers to accomplish its mission, Kreitz said.

Often, “we have done the research or the analysis and it’s simply they can come in and do the field operation for less money than we can,” he said of partner agencies, many of whom use volunteers or students to conduct fieldwork.

Three years ago, when DPAA first began leveraging partnerships in Europe, it worked with two outside agencies. Last year, there were 12 and the number continues to grow, contingent on funding.

Globally, DPAA has about 600 staffers and employs 150 contractors, Brannigan said. In Europe, the staff during the past year has grown from three to eight. The office is seeking to add two regional experts who speak Italian and French to facilitate access in southeastern Europe, Brannigan said.

Authorities across Europe are mostly accommodating to DPAA requests for access to land – public or private – “but there is also frequently a sense of amazement that we are still pursuing the recovery of bones from a 75-year-old conflict,” Brannigan said.

For example, chest radiograph comparison, a recent development pioneered in DPAA’s laboratory under one of its former agencies, allows scientists to identify remains with a collarbone, which is about as distinctive as fingerprints, Brannigan said.

Back to the drawing board Of the more than 22,000 still missing across Europe, the Mediterranean and North Africa, about 8,000 are considered recoverable, Brannigan said. Most of the rest are deep-sea losses, he said.

In 2010, when DPAA resumed accounting for World War II personnel, previous cases deemed nonrecoverable were put back on the books, Brannigan said.

The case of Bill Gray, the pilot who crashed in 1945 near Lindau, got a second look.

Army investigators in 1948 found only molten wreckage and some material evidence at Gray’s crash site, which for years remained unreachable since it was behind the communist Iron Curtain.

But in 2012, locals showed investigators where debris was recovered in a different part of the forest, Brannigan said. On the first day of digging in April 2016, a DPAA team found osseous remains in the roots of a beech tree.

There have been other successes. Last summer, the Woods Hole Oceanographic Institution in Massachusetts, in partnership with Lund University in Sweden and the U.S. National Park Service, did an excavation on behalf of DPAA of a downed B-24J from World War II in the Adriatic Sea.

The Croatian navy provided the ship and divers, who reached the underwater wreckage at about 138 feet, Brannigan said.

As a result, 1st Lt. Eugene P. Ford’s remains were identified in January.

The Europe Detachment also had a hand in the first and possibly only recovery of American remains in Ukraine from World War II.

Second Lt. John Mumford was identified in January 2017. He was last seen June 6, 1944, in a dogfight with two German Focke-Wulf FW-190 fighters near Kubey, Ukraine.

And in May, more than 74 years after his B-24 Liberator crashed over present-day Slovenia, the remains of Sgt. Alfonso Duran were identified.

As the push to account for more World War II missing bears fruit, Brannigan is sometimes asked whether the remains of these men would have otherwise been found.

“I guess they would have been (returned) eventually, but how many more decades or centuries?” Brannigan said.

That, he said, begs another question: “How long will this mission go on, because literally to get through those 83,000 (still missing) globally, we’ll be doing this at least another century.”