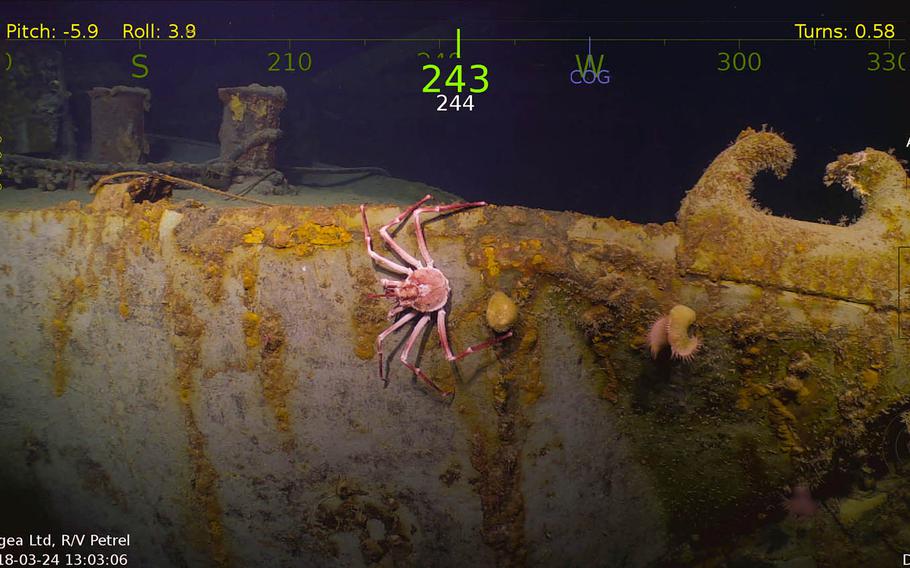 A photo of the USS Helena taken in late March by the research vessel Petrel near the Solomon Islands, where the cruiser was sunk by three Japanese torpedoes on July 6, 1943. (Courtesy of Paul Allen)

A photo of the USS Helena taken in late March by the research vessel Petrel near the Solomon Islands, where the cruiser was sunk by three Japanese torpedoes on July 6, 1943. (Courtesy of Paul Allen) The light cruiser USS Helena, center, fires during the Battle of Kula Gulf, just before it was torpedoed and sunk by the Japanese, July 6, 1943. (Courtesy of the U.S. Navy)

In the early morning of July 6, 1943, the USS Helena lit up the darkness as its crew unleashed the ship’s array of guns at 10 Japanese vessels during the Battle of Kula Gulf near the Solomon Islands.

But it would be the end of the line for the St. Louis-class cruiser, which had been nearly destroyed at Pearl Harbor during the surprise attack of Dec. 7, 1941.

“At 2:40 a.m., a tremendous explosion hit the HELENA as the first torpedo found its mark, completely tearing off the ship’s bow,” Frank Cellozzi, a gunner’s mate on the ship, recalled in a 1984 memoir. “Twenty seconds later, the second hit amidships. Almost immediately, the third hit amidships. The HELENA died at 2:41 a.m., her back broken amidships.”

The captain ordered the crew to abandon ship, and Cellozzi cleared the ship by diving off the top of a five-foot gun turret. Turning his head for one last look, he saw the bow and stern rising toward each other in the shape of a V.

“With the grinding and rumbling of torn metal, she slid straight into the dark depths of the Kula Gulf,” he wrote.

The Helena lay there undisturbed for 75 years until late last month when an expedition aboard the research vessel Petrel discovered and filmed the lost ship. It was found about a half-mile below the surface on the floor of the New Georgia Sound off the coast of the Solomon Islands.

The discovery was announced Wednesday by Paul Allen, the billionaire co-founder of Microsoft and owner of the Petrel.

“We do these missions as testament to the brave souls who served on these ships,” Robert Kraft, director of subsea operations for Allen, said in a statement. “Each ship has a story that touches families and friends of those who perished or survived.”

The Helena had taken a terrible beating at Pearl Harbor. Just as the crew reached their battle stations, a Japanese torpedo slammed into the side of the ship, leading to flooding of an engine room and boiler room. But the ship was kept afloat, and by the following year it had been repaired and was escorting an aircraft carrier bringing planes to the South Pacific.

In October 1942 at the Battle of Cape Esperance near Guadalcanal, the crew of the Helena sank the Japanese cruiser Furutaka and destroyer Fubuki.

On July 6, 1943, the Helena was among a group of three American cruisers and four destroyers that squared off against 10 Japanese ships. Within 10 minutes of the opening fire, the Helena had been mortally hit by the torpedoes.

“For the next hour, close to one thousand men bobbed in the water, praying to be rescued,” Cellozzi recalled.

Within a half-hour of the sinking, two U.S. destroyers arrived at the scene to begin plucking hundreds of Helena survivors out of the sea. But at daybreak the ships broke away to pursue enemy vessels.

About 275 survivors made their way onto small boats left at the scene by the destroyers, and the ragtag flotilla quickly made its way to a nearby island. Those sailors were rescued the next day.

A second group of 200 sailors had a rougher time of it.

They had clung to the slowly sinking bow of the Helena before a Navy Liberator bomber dropped lifejackets and four rubber lifeboats to them.

Cellozzi was among those sailors.

“In the afternoon, we broke out some food supplies — Spam, malted milk balls and Lucky Strike cigarettes,” he wrote.

After drifting and paddling for days, the 165 sailors still alive reached the island of Vella Lavella.

“By this time our eyes were swollen almost closed from the sun and our lips were festered from the saltwater,” Cellozzi wrote.

“Our raft became impaled on a coral reef about 400 feet from the beach. We had lost our shoes many days before; we walked barefoot over the coral reef, knee deep in saltwater, to get to the beach. We watched our blood rising to the surface as the razor sharp rocks cut through our skin like knives. It took almost an hour to cover that 400 feet.”

They headed into the jungle to avoid detection by Japanese patrols.

On July 16 – 10 days after their ship had sunk – the Helena sailors on the island were rescued during the night by four U.S. destroyers.

Seven hundred-thirty of Helena’s crew of nearly 900 survived the ordeal.

“It took three Long Lance torpedoes to take her down,” Cellozzi wrote of the Helena. “One hundred sixty-nine men went to their grave with her. The affection and respect that her crew had for her did not die, however. To this day, we think of her as one great lady.”

Since deploying in 2017, the Petrel has made several discoveries of military ships, including wreckage from the USS Ward, which fired the first American shot of World War II at Pearl Harbor. In August, it found the USS Indianapolis, which delivered parts for the first atomic bomb ever used in combat.

Last month, the crewed discovered the USS Juneau, an Atlanta-class light cruiser that was sunk by a Japanese torpedo in November 1942 during the Battle of Guadalcanal. Only 10 sailors survived. Casualties included the famous Sullivan brothers, who enlisted in the Navy together shortly after Pearl Harbor on condition they be allowed to serve together.

Also in March, the Petrel discovered the USS Lexington, an aircraft carrier sunk during WWII. Its wreckage rested about 500 miles off the eastern coast of Australia.