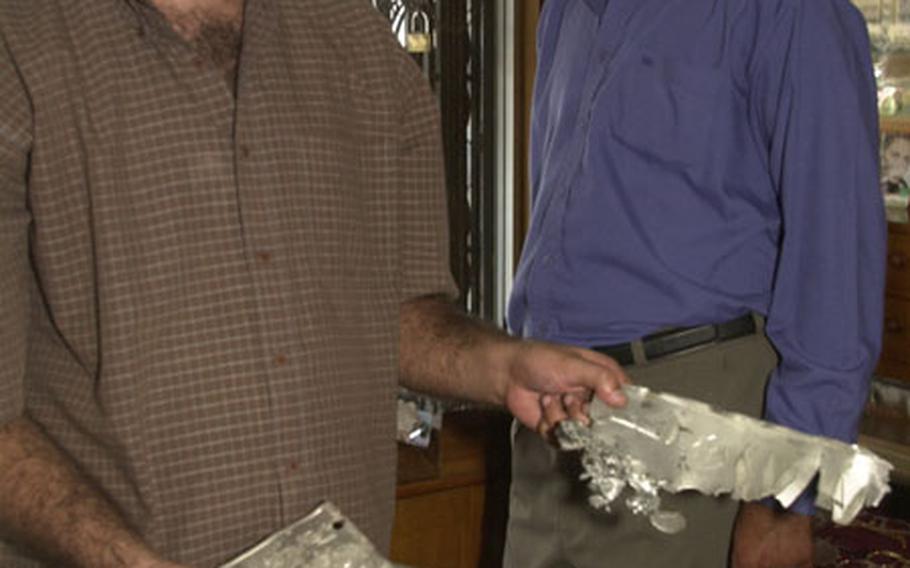 Abraham Ibrahim holds the license plates of his Mercedes Benz after a botched July 28 U.S. raid in Baghdad&#39;s al-Mansour district for Saddam Hussein left several cars burned and as many as five people killed. His brother, Mohamed Ibrahim stands in the background at their optical shop. (Scott Schonauer / S&S)

Abraham Ibrahim holds the license plates of his Mercedes Benz after a botched July 28 U.S. raid in Baghdad&#39;s al-Mansour district for Saddam Hussein left several cars burned and as many as five people killed. His brother, Mohamed Ibrahim stands in the background at their optical shop. (Scott Schonauer / S&S) 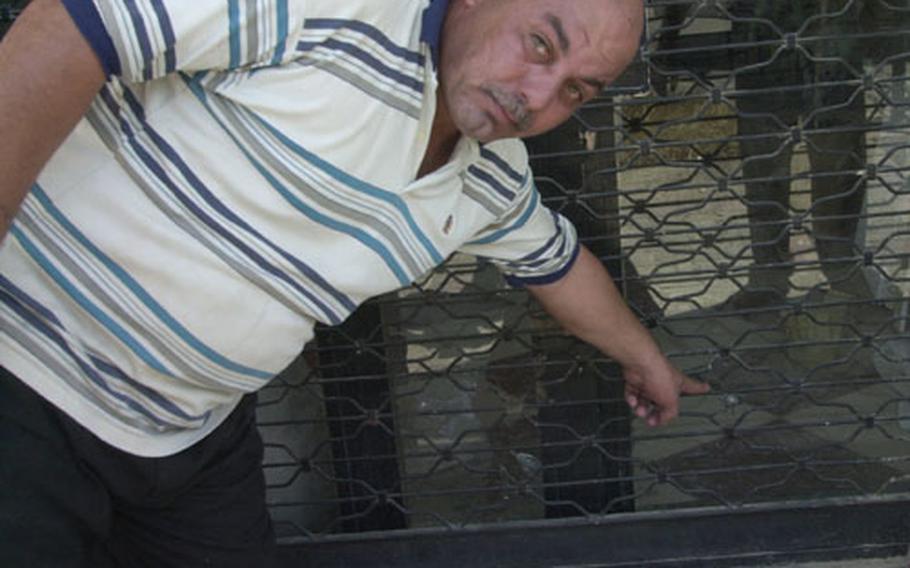 An Iraqi man points to bullet holes in the window of a shop in the al-Mansour district of Baghdad, Iraq. A U.S. special forces team killed as many as five civilians in a botched raid for Saddam Hussein on July 28. (Scott Schonauer / S&S)

BAGHDAD, Iraq &#8212; Army Capt. Jeff Hall and his platoon rolled up near the Al-Sa&#8217;ah Restaurant in Humvees and were quickly mobbed by angry residents. Nearby, two bullet-riddled cars and a dead man with his head split open were all that remained from a U.S. operation that had gone badly.

In the chaos, Hall tried to calm the crowd, but many of the people out in Baghdad&#8217;s upscale al-Mansour district were furious and giving his troops an earful.

Hall and his troops arrived on the scene July 27, minutes after a group of special operations forces had left, leaving behind a bloody mess. As many as five civilians are believed to have died that day when soldiers opened fire at a street corner, a few blocks away from where other troops raided a tribal leader&#8217;s home.

The exact details of what has been called the &#8220;Mansour Massacre&#8221; remain elusive. Witnesses give conflicting accounts, while the U.S. military has released little information.

It was one of hundreds of raids coalition forces have conducted in the past several weeks in search of former Iraqi leader Saddam Hussein. But as U.S.-led forces intensify their hunt for the fugitive dictator, some Iraqis are complaining that the aggressive tactics are putting innocent civilians at risk.

As troops throughout the country help rebuild what has been destroyed by war and stunted by an oppressive regime, the few incidents like the one in al-Mansour make it more complicated to win over the Iraqis.

Some residents are still upset and fear that they could get in the cross-fire in the pursuit of Saddam.

Mohamed Ibrahim was in the shop when he said he saw about 70 soldiers driving down the street.

The convoy of soldiers captured the attention of workers at the Al-Sa&#8217;ah Restaurant. Some went up on the roof to get a better look. One witness said he saw several GMC Suburbans filled with soldiers wearing civilian clothes. Another, who watched from the roof, said that most of the guys were wearing all black.

The soldiers, military sources say, were members of an elite and secretive special operations unit tasked with finding Saddam and his top associates. Members are drawn from Delta Force and Navy SEALS. They typically wear civilian clothes or uniforms other than the traditional cammies, and drive civilian cars.

Before the United States invaded Iraq on March 20, they are believed to have gone deep into the country to secure Scud missile sites. In addition to capturing many of the major players in Saddam&#8217;s regime, they also took part in the rescue of prisoner of war Pfc. Jessica Lynch.

On July 27, the group acted on intelligence that Saddam or his youngest son, Ali, were in al-Mansour staying at a villa owned by a well-known tribal leader.

Sometime before 6 p.m., they blocked off a side road near the house, creating a traffic control point. A few blocks away, another team prepared to raid the home, using an explosive device to open the door.

The shooting began sometime after the team entered the home.

A Toyota Corona driven by a handicapped man turned down the street and headed toward the checkpoint. Some witnesses said the man didn&#8217;t appear to understand that he was supposed to stop.

When he did, it was too late.

&#8220;The car that was taken under fire, either it was panic [on the part of the driver] or the soldiers on the ground believed &#8212; they made a judgment call &#8212; that the vehicle was trying to run the traffic control point, run through it and into the direction we were operating in, we were isolating,&#8221; said Lt. Gen. Ricardo Sanchez, commander of coalition forces. &#8220;And that&#8217;s when they were taken under fire and killed.&#8221;

Machine-gun fire peppered the windshield and killed the handicapped man instantly. One bullet split his skull, spilling pieces of his brain onto the cushion of the car, Mohamed Ibrahim said. A woman and a boy riding in the vehicle were injured and residents say both died at a nearby hospital.

Another car, a Chevrolet Malibu, was behind the Toyota and also got hit, killing two people inside and injuring another, witnesses said.

Bullets hit Abraham Ibrahim&#8217;s Mercedes, which was parked in front of his optical shop. One bullet hit the gas tank of another car, causing a fire that spread to two other vehicles.

One man tried to leave his store to put out the fire with an extinguisher, but scurried back inside amid flying bullets.

Abraham Ibrahim watched as his Mercedes, which he bought for $5,000 in Germany, continued to burn.

Neither Saddam nor his son, Ali, were found in the raided house.

His platoon, which is attached to the Fort Riley, Kan.-based 3rd Brigade, 1st Armored Division, calls al-Mansour their area of operations.

Until the July 27 shooting, the district had been quiet.

The area is home to mostly wealthy and well-educated residents, including doctors and lawyers. Some Iraqis like to venture to that part of Baghdad because they consider the area to have some of the best shops and movie theaters.

The district is predominantly Sunni Muslim, which received considerably better treatment under the former regime.

A few hundred yards away from where the shooting occurred is where U.S. forces dropped four 2,000-pound &#8220;bunker buster&#8221; bombs on April 7. Commanders had received reports that Saddam was in a house there, and some military officials thought they might have killed the dictator in the bombing. Coalition officials now believe they missed the ousted leader by minutes.

As Hall&#8217;s platoon loaded the scorched cars onto a military flatbed truck, some of his soldiers tried to push a throng of reporters and photographers farther away from the scene.

A Japanese reporter has told other journalists that he was beaten by some of the soldiers. But Hall said his men briefly detained the reporter after he kicked one of the soldiers as they tried to move the crowd back.

Several days after the incident, hundreds of al-Mansour residents protested to voice their anger. Although Hall said the botched operation might make matters difficult for his platoon, he said it is important that U.S. forces use aggressive tactics to catch regime loyalists and criminals.

Time will tell if the approach will be effective. Coalition troops have captured hundreds of Baath Party members and gang leaders who have tried to take advantage of a power vacuum in the country.

But in the al-Mansour district, they have already lost the support of some people.

On Friday, a soldier from the 82nd Airborne Division was shot and killed while he stood guard in the area. There is no evidence that the killing of the soldier was in response to the raid, but there is little doubt that some al-Mansour residents are growing weary of the U.S. presence.

Abraham Ibrahim said that troops are acting no better than the former regime if they kill or scare innocent civilians. He said his father does not leave the house because a soldier pointed his gun at him at an intersection.

Four days after the incident, Sanchez admitted that his troops killed civilians and that he regretted it, but he stopped short of accepting blame. Some residents have demanded an apology, but Sanchez said that &#8220;apologies are not something that we have as part of the normal procedure, military processes.&#8221;

Soldiers are investigating the shooting, but he said that it is inevitable that some civilians could get hurt during a military operation.

&#8220;That is very, very important to us to not do that. And unfortunately, in some instances, when you are in the middle of a firefight, there are civilians that get hurt.&#8221;

Looking back, Hall said it is likely that the people of al-Mansour will move on from the incident and that the fury will subside.

BAGHDAD, Iraq &#8212; The U.S. military has paid Iraqis thousands of dollars for property damage or theft by soldiers, but it is unclear whether any families have been paid for a wrongful death of a loved one.

Payments have been made, for instance, to homeowners in northern Iraq whose property was damaged by a controlled explosives cache demolition and to a vendor who was robbed by American troops.

U.S. officials did not know whether the military paid families of those who were accidentally or wrongfully killed by American servicemembers.

The armed forces can pay claimants for death, personal injury, or property damage caused by military members through the Foreign Claims Act.

The law was set up after World War II to promote good relations between the military and foreign countries and their citizens.

Claims are broken down into three categories: combat, noncombat and acts of soldiers and civilian employees.

In Iraq, the military is using May 1 as a line of demarcation in determining whether an incident is combat or noncombat. Any claim submitted before that date will not be paid because it is considered to have happened during combat operations.

That does not mean, however, that anything after May 1 is considered noncombat. For example, a military checkpoint could be considered a combat activity in certain situations. But Warren warned that each case is different.

It is possible that the military has paid a family for the wrongful death of a loved one caused by U.S. military forces even if the family does not submit a claim. Commanders have an emergency fund they can use at their discretion. A command could use that money to pay a family in a wrongful-death claim.

There are 31 claims commissions spread throughout the country to resolve claims by Iraqis, said Capt. Brian Adams, a military lawyer. In addition, commands have their own legal officers who can resolve claims. Military forces in Iraq handle all claims under $50,000. The U.S. Army Claims Office in Washington, D.C., handles anything exceeding that amount.

Claims are typically resolved in about a month, Adams said. But more complicated claims can take longer.

Photographs, receipts and other evidence of ownership can help speed up the process. So far, most of the paid claims have been for property damage, officials said.