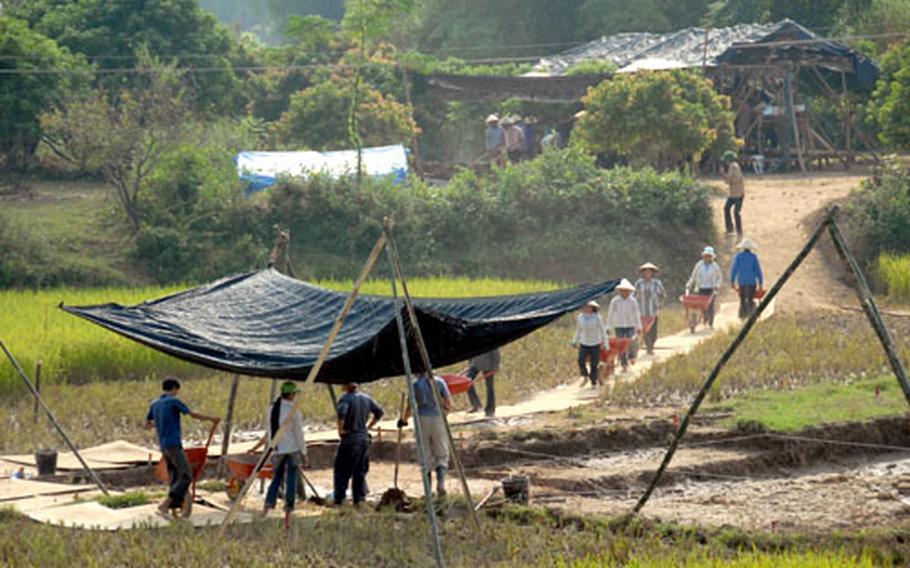 Vietnamese workers carry loads of clay to a sifting station from the rice paddy where an F-4 Phantom fighter jet crashed during a mission in 1967. The clay will be washed through metal bins, which catch any debris — bits of plane, bone or teeth — left in the mud from the crash. (Ashley Rowland / S&S)

Vietnamese workers carry loads of clay to a sifting station from the rice paddy where an F-4 Phantom fighter jet crashed during a mission in 1967. The clay will be washed through metal bins, which catch any debris — bits of plane, bone or teeth — left in the mud from the crash. (Ashley Rowland / S&S) 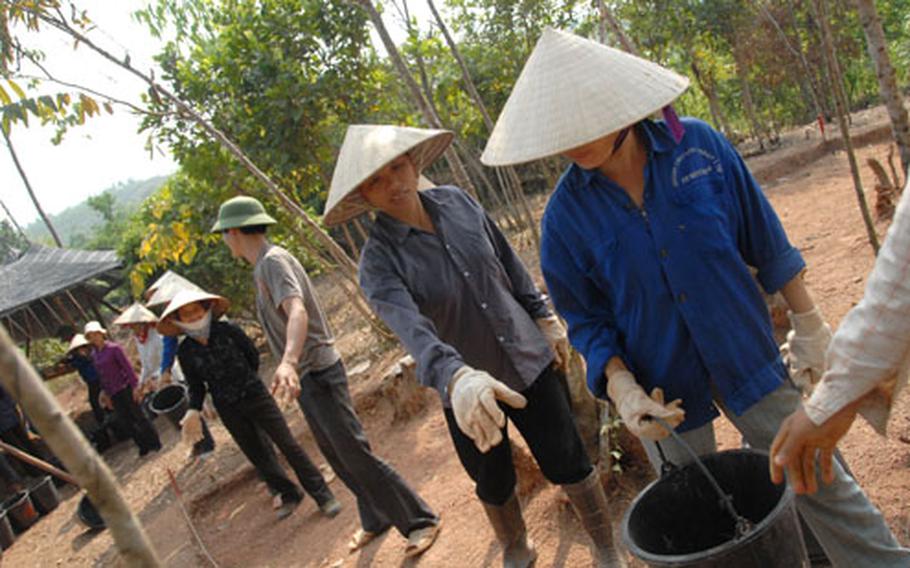 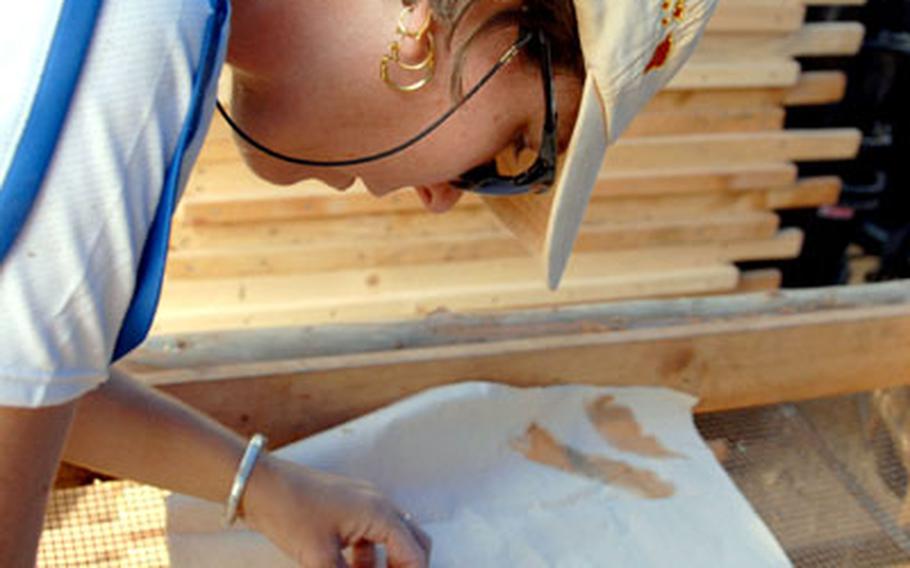 Dr. Laura Miller, JPAC anthropologist, examines a piece of flight suit the team found in a rice paddy that is believed to have been worn by one of the two-person crew in an F-4 Phantom that crashed in Lang Son province, Vietnam. (Ashley Rowland / S&S) 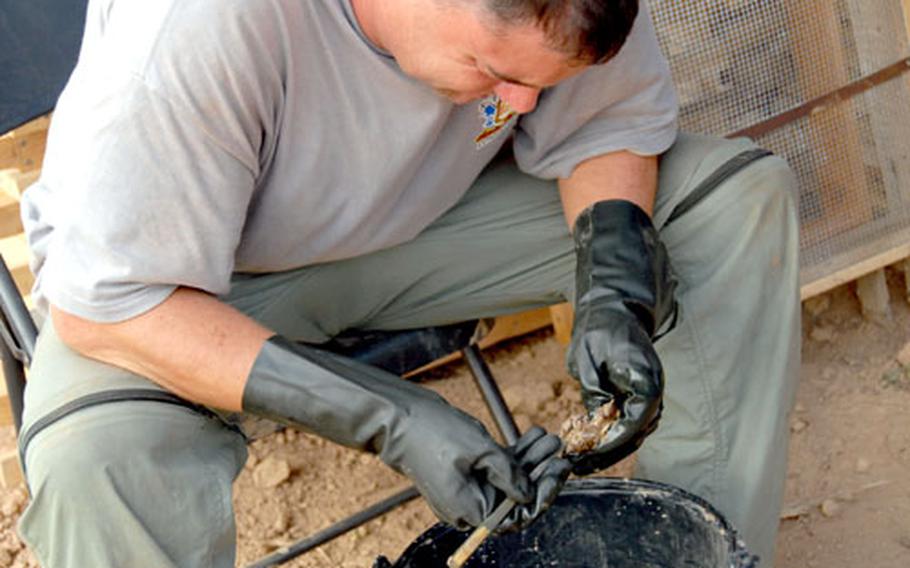 At the end of a day of digging, Air Force Master Sgt. Scott Riker examines a piece of debris the JPAC team found that day. Riker is a life support investigator who can identify what kind of debris the team finds. (Ashley Rowland / S&S) 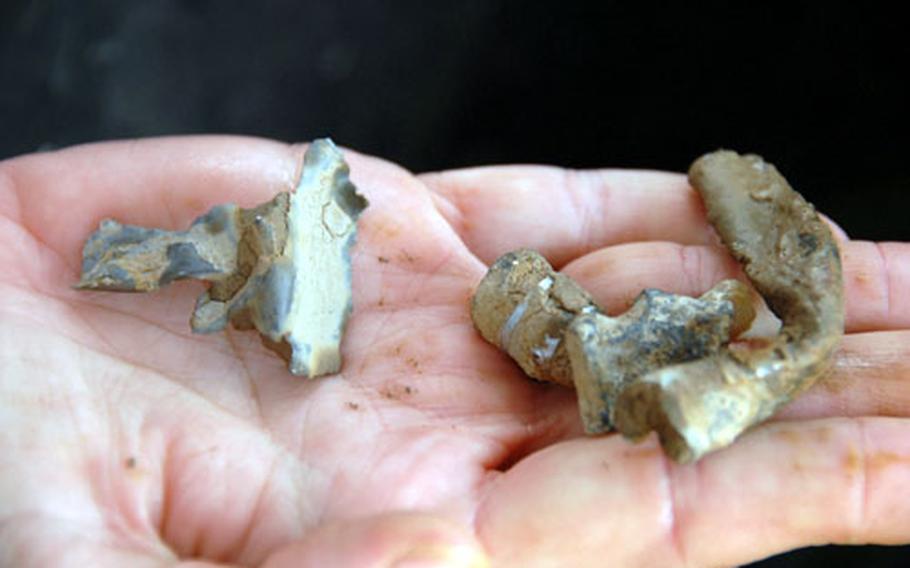 Dr. Laura Miller holds metal pieces believed to be part of an F-4 Phantom that crashed in north Vietnam in 1967. (Ashley Rowland / S&S)

LANG SON PROVINCE, Vietnam &#8212; On a sun-baked hilltop covered by scrub and slender birch trees, the forensic anthropologist fingers two small white objects in her hand, both the size and shape of a man&#8217;s front tooth.

It is 10 days into this dig, and Miller and the 16 other Americans with the Joint POW/MIA Accounting Command, the U.S. military group that searches for the remains of troops lost in combat, haven&#8217;t found what they&#8217;re looking for &#8212; two airmen who went missing when their F-4 Phantom fighter jet was shot down by Vietnamese communists in 1967.

Their search field is a rice paddy and an adjacent hillside, roughly the size of 1&#189; football fields. But the remains they seek may not exist after 40 years in the corrosive Vietnamese soil.

The U.S. military has sent teams across the world to search for the bodies of missing troops for decades. In 2003, two military units &#8212; the Central Identification Laboratory, created in 1973, and the 11-year-old Joint Task Force-Full Accounting &#8212; merged to create JPAC.

Today, JPAC has 400 military and civilian employees and the largest forensic anthropology lab in the world at its Honolulu headquarters. It launches at least 25 recovery missions yearly to sites in Southeast Asia, Europe and the Korean peninsula, sometimes to areas so remote that the teams can reach them only by helicopter.

Any human remains they find are sent to Hawaii for identification, usually through dental records or DNA analysis. JPAC identifies an average of six troops each month and returns the remains to their families with full military honors.

But it can take millions of dollars and years, sometimes decades, to find them.

For this dig, researchers started the process by combing through records to determine where the aircraft crashed. They traveled there to interview witnesses, hoping someone could pinpoint exactly where the aircraft hit the ground.

Often at sites worldwide, they find nothing once they begin digging.

To get here, the JPAC team members drive an hour from their hotel in the nearest town, part of the trip down a rutted dirt road. They are an hour&#8217;s drive from the Chinese border, and very deep in what once was enemy territory for the U.S. military.

&#8220;We&#8217;re talking about way behind enemy lines, a place where the U.S. did not have ground troops at all. They were 100 percent Vietnamese communists,&#8221; said Ron Ward, a JPAC casualty resolution specialist. &#8220;It was a very determined enemy. They were poor farmers mostly, but every village has some type of resistance unit.&#8221;

The first JPAC team came to this site in 1999, after the Vietnamese government gave U.S. officials some of its records from the war. Based on those records, researchers pinpointed the location of this F-4 crash in Lang Son province in northwest Vietnam.

They interviewed area residents, all former militia members who said they saw the jet fall from the sky or visited the wreckage in the days after the crash. Some claimed to have shot it down.

The team didn&#8217;t find any remains on its first dig. But JPAC researchers re-interviewed nearly a dozen witnesses, some old and some new, believing the debris from the crash might have spread over a wider area than what the team excavated.

JPAC returned to the same rice paddy in the summer of 2007, but dug several yards away. What they found &#8212; including a tattered, 6-inch piece of flight suit that lay untouched on top of the hillside &#8212; made them decide to conduct a full-scale dig in October and November.

Ward believes that what started out as a difficult case could soon be over.

When a jet crashes, it rarely plunges straight into the ground. It usually tumbles and rolls on impact, scattering debris over a wide area. Pieces of the jet sometimes break off in mid-air, before it even hits the ground.

Based on witness testimony and what the team has found so far, Miller believes this jet crashed in the rice paddy, flinging remains up the hill in a V-shaped zone about 160 yards wide.

So far, they&#8217;ve found pieces of metal from the jet &#8212; wire, sheet metal from the fuselage, bolts and knobs &#8212; and bits of life support and helmet. They even found a patch of clay that still reeked of jet fuel, 40 years after the crash.

What they haven&#8217;t found is what they need to close the case: human remains.

Time is the enemy

For JPAC, time is the enemy. Bones erode, dirt shifts and washes away, witnesses forget exactly where an aircraft crashed, and eventually, they die.

&#8220;People who were younger when war ended are still around, but increasingly we find that key witnesses have health problems that prevent them from participating, or they&#8217;re dead. Time is not our friend in this issue,&#8221; Ward said.

Whether a bone survives depends on a number of factors, including how close it lies to the surface and whether the ground has been disturbed.

In this recovery, the crater &#8212; the expected spot of impact of the plane, and the point of the V-shaped zone of debris &#8212; is in the middle of a rice paddy. The field is flooded every year to soften the ground before rice is planted and dries out after each rainy season.

It&#8217;s similar to the effect a frost heave has on highways in the American Midwest. As the ground dries and contracts, the highway cracks.

When a bone is submerged in water and dried, year after year, it cracks again and again.

Neither is the acidic soil of Southeast Asia, which breaks down the protein inside the bone. But nylon parachutes, flame-resistant flight suits, and jet fuel can survive for decades and act as clues to where the bone might be.

As in all JPAC recovery missions, the families of these two airmen don&#8217;t know about the dig. JPAC contacts them if they need DNA samples, usually after remains have been found. Otherwise, the families won&#8217;t learn the results of an excavation until a servicemember has been identified.

It is now Day 12 of the dig, and when the team arrives on the site at 7 a.m., it is already hot and muggy. It is quiet except for the clank of plastic buckets at the screening stations, and the air smells like fires that the peasants who live here use for cooking.

They begin digging and screening the clay and mud for bone fragments, the same as they do for eight hours every day. It is exhausting, repetitive, dull and dirty work.

Just before lunch, Miller takes a call on her radio. Someone has found a faded piece of flight suit &#8212; now the color of the red clay it has been buried in for 40 years &#8212; at one of the sifting stations.

This is both good and bad news. Miller didn&#8217;t expect to find life support at this spot, and this find means the team will have to excavate a larger area than she thought. But where there&#8217;s a flight suit, there could be bone nearby.

Miller carefully spreads the wet piece of fabric on a screen, examining the zippers still attached to it. Three minutes later, her radio buzzes. It&#8217;s a call from the sifting team on the top of the hill.

A half-hour later, Miller is up on the hill, holding three pieces of dirt-coated bone, each no larger than a penny.

She tells the team members to stop their digging. She wants them to begin scraping the dirt, so they don&#8217;t miss any remains that, like these, may be just below the surface of the ground.

They get back to work.