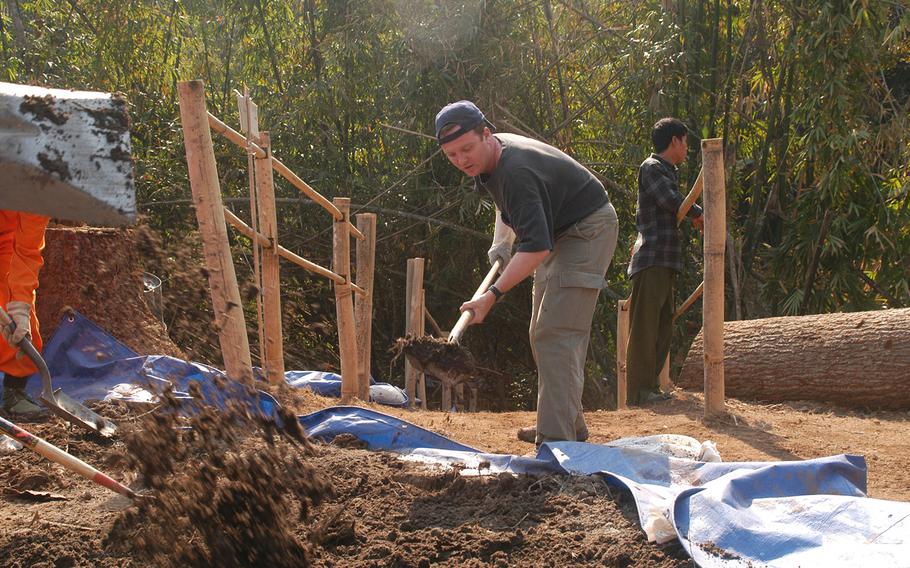 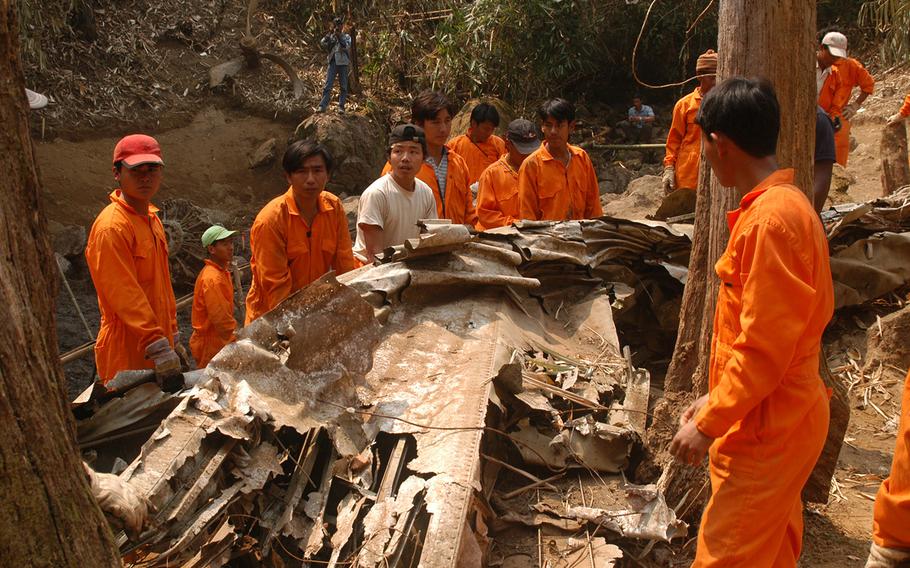 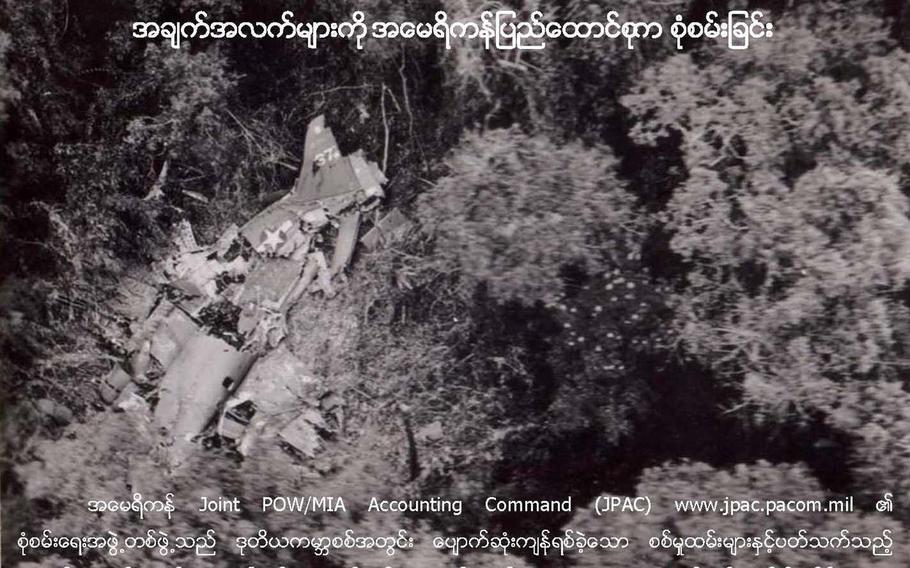 The Joint POW/MIA Accounting Command is running newspaper ads like this one asking the Myanmar public to call in with information about WWII MIAs. The ad says in part that the mission team "has established a tip hotline and requests anyone with information on missing American service members or possible U.S. aircraft crash sites" to call a local phone number. (Joint POW/MIA Accounting Command)

YANGON, Myanmar — It was a day like any other when Mark Fagan received a call from the Pentagon in 2006.

“Long story short, they told me, ‘We think we’ve found the plane that your uncle died on in 1944,’ ” recalled Fagan, a professor of social work at Jacksonville State University in Alabama.

Born in 1952, Fagan’s youth had been steeped in older relatives’ discussions and remembrances of his uncle, Fred Fagan, a private whose cargo plane went missing on May 23, 1944, over Burma, now called Myanmar.

Fagan’s downed plane was one of the few located during a brief period of cooperation between Myanmar and the United States, which had imposed economic sanctions against the country after a deadly crackdown on peaceful demonstrators by the controlling military junta in 1988.

The Joint POW/MIA Accounting Command conducted several excavation operations in Myanmar in 2003 and 2004, but the junta soon suspended the efforts.

With the election of President Thein Sein in early 2011 and nascent reforms, the sanctions have been eased. JPAC is now back in a country where the remains of hundreds of WWII MIAs lie in overgrown jungles.

“We’re very grateful to the government of Myanmar for opening up its borders and partnering so our remains-recovery people could come and look for our people who were left behind decades ago,” said Derek Mitchell, who became U.S. ambassador in July after the appointment went unfilled for 22 years. “We hope to continue that partnership.

“It’s also a very good first step in our engagement with the military here and with the Defense Ministry and others. We want to build understanding, build ties, as we go.”

“The first thing we have to do is obtain information,” Webb said in a phone interview from JPAC’s Hawaii headquarters. “So we’re talking with individuals who might have knowledge of U.S. crashes. We’re then taking the information provided and having our historians and analysts try to correlate that loss with one of our recorded losses.

“If we get sufficient evidence, we could put a recovery team in.”

He said the JPAC team has gotten “good cooperation” thus far. The agency has been allowed to run notices in Myanmar newspapers soliciting information from the public.

“So we’re getting phone calls from a number of witnesses providing information,” Webb said.

They are currently investigating about 45 sites in Myanmar, according to Maj. Phillip Ulmer, JPAC public affairs director. Almost half are assumed to lie in areas of Kachin and Shan states, however, where conflicts between ethnic militias and the Burmese army could prevent field operations.

The remains of about 730 American MIAs from WWII are believed to be in Myanmar, Webb said. Most are in what’s known as the China-Burma-India Theater, the tri-country region where Allied forces stopped and then slowly pushed back the Japanese army.

Japan first cut off supplies to China with its navy, and by the spring of 1942, it had severed the country’s last land supply route through Burma. Allied strategy, however, depended on a well-armed and -supplied Chinese military keeping hundreds of thousands of Japanese troops engaged.

The strategy called for thousands of cargo flights from India to China over what was dubbed the “Hump” – the Himalayan Mountains. The Hump was an often fatal route with unreliable charts, no radio navigation aids and little information about weather in an area where conditions were unpredictable and brutal. Almost 1,000 men and 600 planes were lost on the Hump, according to JPAC data.

Other cargo planes flew into northern Burma and dropped arms and supplies to Allied troops. They were vulnerable to Japanese fighter planes based in Myitkyina, the capital of Kachin State.

Fagan’s plane was on such a mission, loaded with mortar shells and supplies to be dropped near Myitkyina, according to reports provided by the Pentagon to Mark Fagan. It was rainy with low visibility. The plane never made it to the drop site.

A dozen search missions failed to locate the missing plane in the months after the Pacific war ended in August 1945.

Between 1945 and 1947, however, searchers recovered the remains of almost 1,400 MIAs in the India-Burma area, according to JPAC data. Searches ended in 1949.

First, the aircraft were relatively slow.

“They’re not moving nearly as fast as the high-performance aircraft from the Vietnam War,” he said. “So you don’t get as much trauma to the body, which means the bones are not as fragmented. So the preservation is fairly good.”

Second, the soil is not nearly as acidic as, say, in Vietnam.

“The remains in Vietnam deteriorate fairly quickly in general terms,” said Webb, who led the first retrieval mission to Vietnam in 1985.

JPAC first heard about the Fagan crash site in 2001 when a priest in Kachin State contacted the U.S. Embassy about wreckage near Myitkyina. An engine data plate and dog tags were retrieved over the next few years by Kachins and sent to JPAC, which was able to excavate the site in 2004.

Only a handful of actual remains were found at the site about 27 miles northwest of Myitkyina in forested foothills. The nearest inhabitants were in a tiny village several hours away by foot.

When the Pentagon called Fagan that day they asked him for a sample of his DNA.

“I was the closest family member alive by that time,” Fagan said. “All his brothers and sisters and all his other relatives were dead, and he was never married.” In essence, Fagan was the last living descendant with a personal, though indirect, bond with the downed soldier.

Adequate remains for DNA identification were found for only two of the men. JPAC retrieved enough evidence, however, to officially account all seven as recovered, Webb said.

The remains were given a group burial at Arlington National Cemetery in July 2010.

“We were so proud that those guys finally made it back and we were giving them a proper burial after 66 years,” Fagan said.