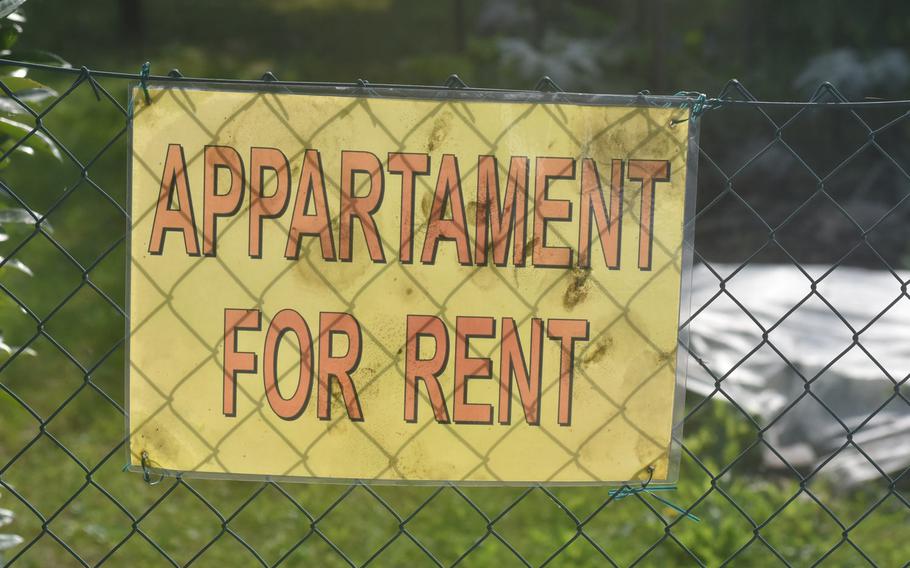 Buy Photo
This sign just a few minutes from Aviano Air Base, Italy, using a combination of Italian and English, indicates that there are some properties available near the base. But with an increase of 300 airmen expected in 2018, the base is looking for more options. (Kent Harris/Stars and Stripes)

AVIANO AIR BASE, Italy — The Air Force is looking for Italians with homes to rent within an hour’s drive of Aviano, as it faces a looming housing crunch due to an influx of new airmen.

The base recently told homeowners already renting to Americans that it’s expecting an additional 300 airmen to transfer to the base in 2018. The base currently has about 200 approved listings in the database available to newcomers.

“There was an expectation that there might be a shortage of homes,” said Antony Saponaro, a housing management specialist, on the reason for the notification.

Aviano is the only Air Force base in Europe that has no on-base family housing. Six dormitories house several hundred single, enlisted airmen E-4 and below.

The base recently helped about 350 airmen from the 606th Air Control Squadron find homes when the unit transferred from Spangdahlem Air Base, Germany. That cut the number of available listings by about half. Now the base is bracing for the arrival of units currently based in England: the 56th and 57th Rescue Squadrons.

There won’t be time enough for developers to build new homes to meet the immediate need, Saponaro said. But he said he believes there are likely sufficient rental homes available if developers and homeowners put those properties on the market.

Among those are units — apartments, condominiums or homes — that have already been built but are awaiting purchase. Enterprising Italians might choose to buy them now and rent them to American tenants, he said.

Other options could come from the roughly 530 homes in build-to-lease communities in 19 communities around Aviano that once housed Americans. The base declined to renew options on those homes earlier this decade, with the idea that homes on the open market would be cheaper to rent.

Many of those homes are already housing Americans, Saponaro said. At least one owner with 50 available units has expressed interest in getting American renters again, he said.

The DOD standard is a commute of an hour or less, Saponaro said. Aviano’s average commute is currently is less than 30 minutes.

As in many overseas communities, there’s a common perception that American renters will pay more than Italians or people from other countries. But Saponaro said that’s no longer the case.

Since 2011, the base has limited rent prices it will pay out based on factors such as square footage, condition and amenities.

That process has lowered average rents by 25-30 percent, Saponaro said.

Each home must be inspected by housing officials before it’s listed in the database. Saponaro said the notice has been sent out now to give homeowners enough time to get their properties prepared for occupancy, inspected and listed so there will be enough options for airmen when they begin to arrive in the spring.