Search continues for Kadena airmen swept into sea by storm 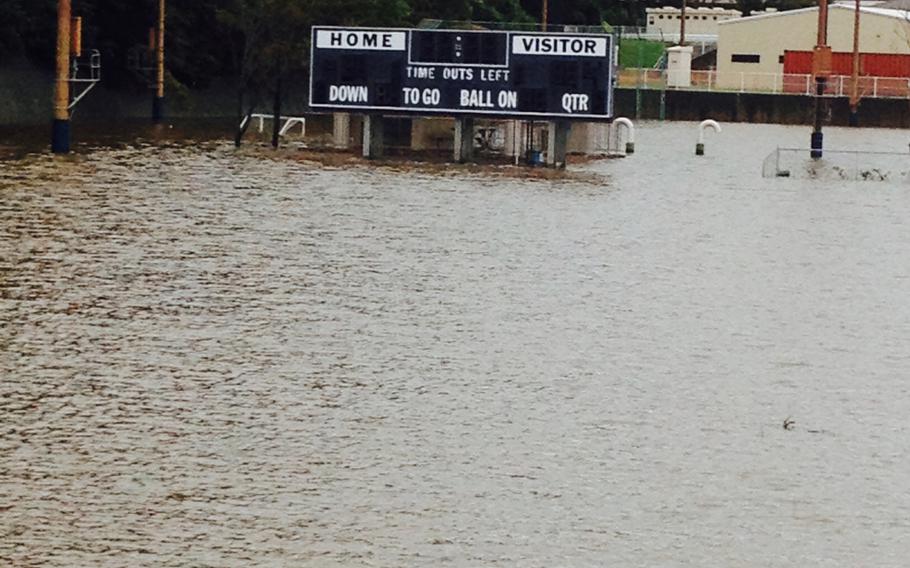 SASEBO NAVAL BASE, Japan — Despite a high-wave warning, a group of six Kadena airmen were walking along Okinawa’s rocky northwestern coastline Sunday to take photos as Typhoon Phanfone churned north toward the Japanese mainland, officials say.

Four were swept away around 3:45 p.m., according to a spokesman for the Japanese Coast Guard, and only one made it back to shore alive. Another was found floating unconscious a few hours later and was pronounced dead at Hokubu Hospital in Nago. Search efforts continued Monday for the other two.

“The waves were so high and massive,” firefighter Kakuei Oshiro, who had been at the scene Sunday in Kunigami Village, told Stars and Stripes.

No identities were released pending notification of families.

The typhoon drenched and battered the Tokyo area, home to several U.S. bases, which closed down Sunday and Monday until the fast-moving storm had swept by. The soccer field at the Ikego housing area near Yokosuka Naval Base was among several places that flooded, and some trains servicing the base were halted.

Workers at Yokota Air Base, northwest of Tokyo, faced cleanup of downed tree limbs and other debris.

The typhoon passed through Sasebo on Sunday night on its way to the Kanto Plain, causing some discomfort for residents due to the heavy winds, but there was no significant damage.

While the sun was peeking through the clouds by early afternoon, the respite may be brief. Weather forecasters were predicting that Typhoon Vongfong, which pounded Rota, just north of Guam, on Sunday, would turn north in a couple of days and head in the general direction of Okinawa and mainland Japan by the weekend.

Stars and Stripes staffer Dave Ornauer contributed to this report.