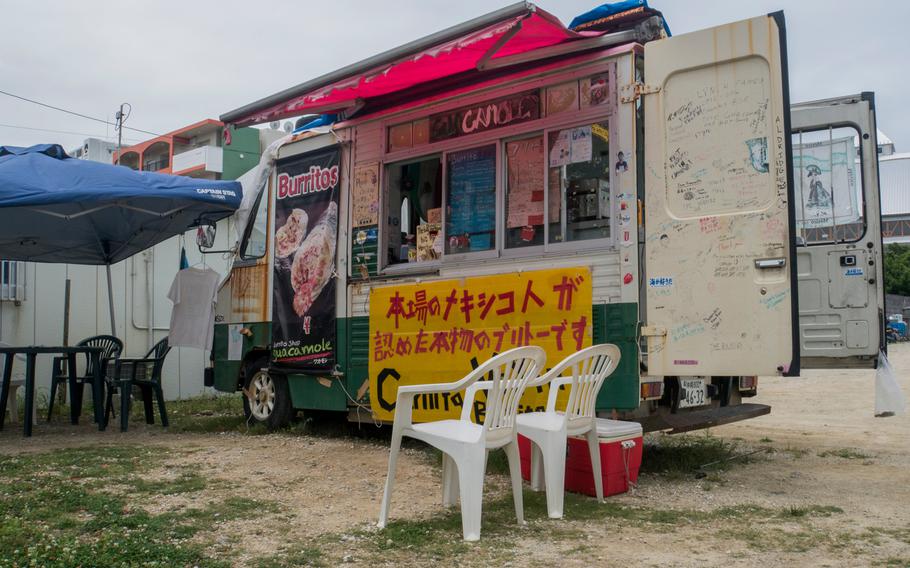 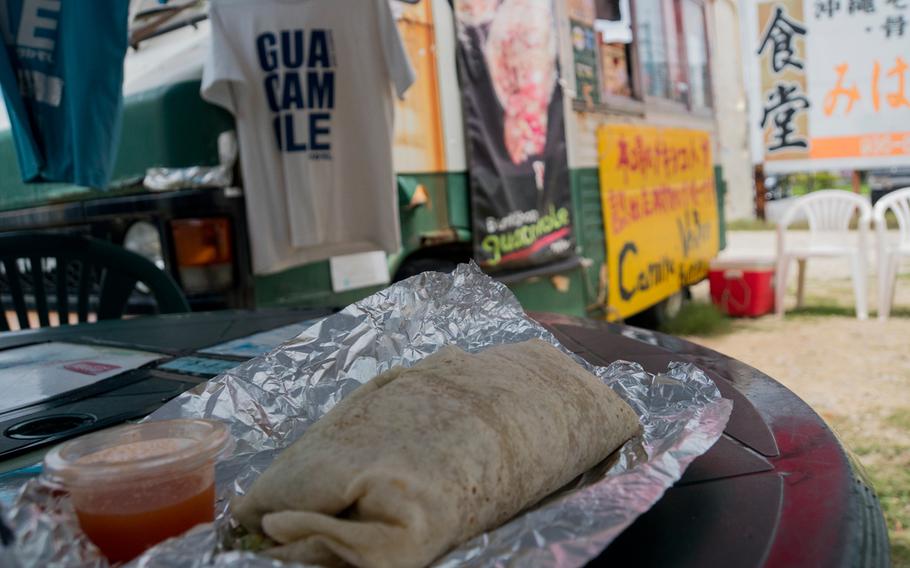 The truck offers burritos, burrito bowls and quesadillas with an assortment of fillings, including pork, ground meat, chicken, Mexican rice, lettuce, sour cream, pico de gallo and, of course, guacamole. Surprisingly, the list does not include beans. (Jessica Bidwell/Stars and Stripes)

The search for good Mexican restaurant on Okinawa has left many a servicemember unsatisfied. Unlike the abundance of good sushi, discovering decent Mexican food can prove to be quite a challenge.

So, this longtime San Diego resident was skeptical about The Guacamole Burrito Truck near Camp Lester despite its positive reviews.

The first thing diners likely will notice is the vehicle’s Mexican flair. The colors green and red abound, and there is rust to spare. It’s smaller than most food trucks and not in the best shape, but the cleanliness of the food preparation area was impressive.

Mariachi music blared from a cellphone at the truck’s window while I explored the menu. Choices included burritos, burrito bowls and quesadillas with fillings such as pork, ground meat, chicken, Mexican rice, lettuce, sour cream, pico de gallo and guacamole. You might be taken aback that the list does not include beans — I was.

I ordered a chicken burrito for 850 yen (about $7.70) and claimed a nearby lawn chair. I was surprised at how serene it was sitting on the plastic chair in a dirt lot near a busy road.

I couldn’t wait to find out if this was the restaurant that was going to put Okinawa on the map for having good Mexican food.

The ingredients were all present, minus the beans, but something was lacking. The guacamole was fresh and delicious. The pico de gallo was on point. The chicken, although a little dry, was well seasoned. However, the rice just killed it for me; it was just dull, and there was too much of it.

The truck also sells drinks, including fresh mango and guava juice, cola and beer. I tried the fresh juices for 300 yen, and both were delicious.

Will I return? This mobile Mexican joint might be just the thing after a night of drinking, but I’ll forgo it next time the craving for Mexican arises.