Search-and-rescue drones could one day save overboard sailors 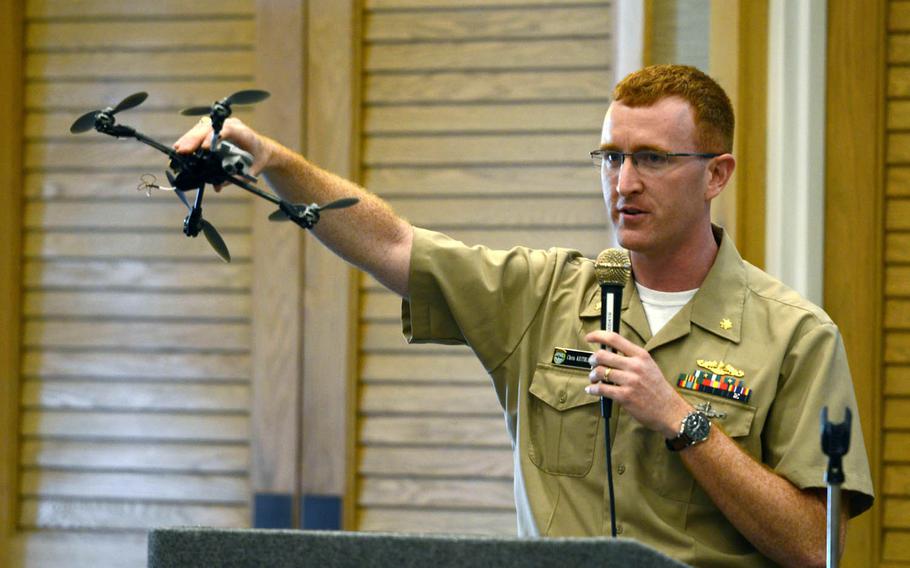 Navy Lt. Cmdr. Christopher Keithley pitches his idea for using drones to search for sailors who have fallen overboard, during a demonstration at Fort Shafter, Hawaii, March 9, 2017. (Phillip Pavlovich/U.S. Navy)

Navy Lt. Cmdr. Christopher Keithley pitches his idea for using drones to search for sailors who have fallen overboard, during a demonstration at Fort Shafter, Hawaii, March 9, 2017. (Phillip Pavlovich/U.S. Navy) 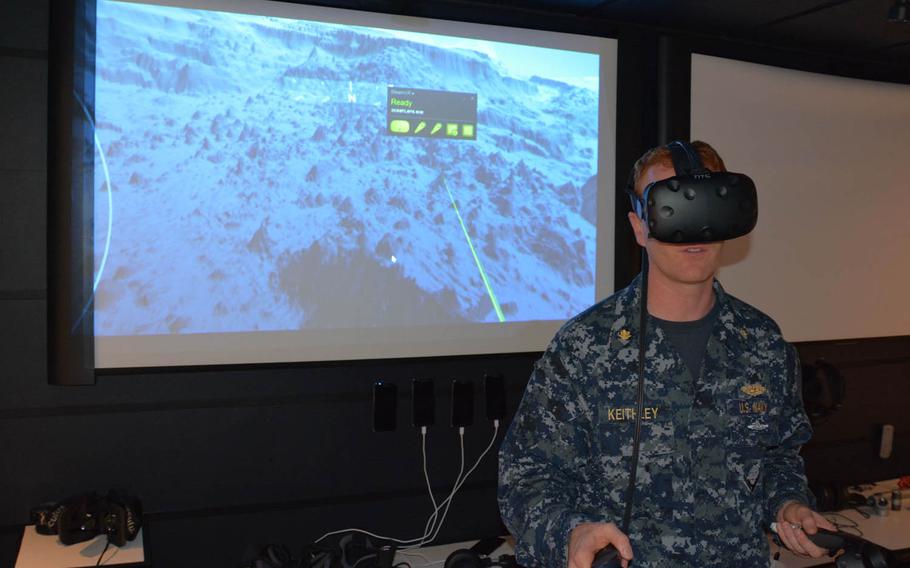 Lt. Cmdr. Christopher Keithley demonstrates a prototype that combines 3-D mapping of the ocean floor with virtual-reality goggles and handsets that could be used for submariner training. It is one of the ideas now in the pipeline at iLab, an innovation center at Joint Base Pearl Harbor-Hickam, Hawaii. (Wyatt Olson/Stars and Stripes) 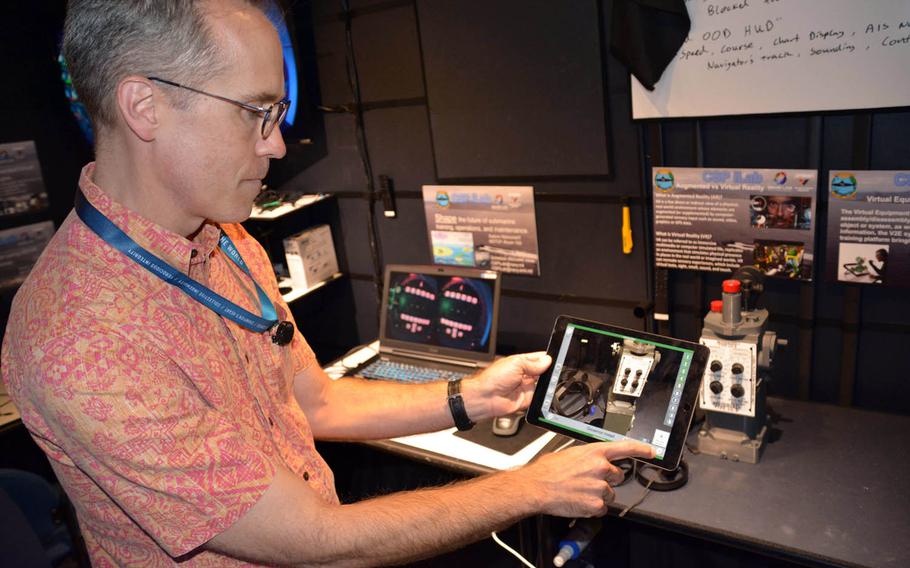 JOINT BASE PEARL HARBOR-HICKAM, Hawaii — Lt. Cmdr. Christopher Keithley’s moment of inspiration came during a drone demonstration by graduate students at the University of Hawaii.

Why couldn’t the Navy use drones to find sailors who have fallen overboard in open sea?

A submarine officer, Keithley had long been aware of the challenges Navy ships face when searching for lost crew members because of their extremely low visibility on the water’s surface.

More than 110 Navy personnel have fallen overboard since 2006, and eight of them died, the Naval Safety Center said.

While subs rarely lose sailors on the high seas, submariners routinely practice and train on the recovery of “man overboard.”

“It’s part of the qualifications,” Keithley said. “Every time the ship is on the surface, when we have time to spare, we practice man-overboard drills.”

Dubbed iLab, the tech-innovation initiative solicits ideas from rank-and-file sailors for ways to make their jobs safer and more efficient but keeping the cost down by using readily available consumer-level technology. The goal is rapid transition from a sailor’s idea to waterfront use.

The lab, which opened in November, linked up with the University of Hawaii’s Applied Research Laboratory and the Laboratory for Advanced Visualization and Applications. It was at the university campus that Keithley, who is iLab’s military developer, saw a demonstration of unmanned aerial vehicles used for mapping underwater coral reefs.

Keithley’s search-drone idea took shape on the drive back to the base that day with Chris Bretz, iLab manager and a SUBPAC innovation adviser with Booz Allen Hamilton.

“Hey, we have this problem out at sea with sailors’ low profile,” he recalled saying to Bretz, “so why don’t we have a UAV option that could automatically fly up and hover over a guy to provide visual and signal cuing data to the recovery platform?”

Relatively inexpensive drones are being used in the field by the Army and Marine Corps, Keithley said. “They’re fairly robust, and they’re small enough that you could put them on ships and submarines.”

In March, he demonstrated the drone to a panel of judges during the Pacific Operational Science and Technology Conference, as part of another Pacific Fleet innovation program geared toward surface ships called The Bridge. Pacific Fleet officials expressed interest in the search drone, he said.

Keithley and the team developing the concept are considering adapting a beacon system used by the Navy called the man-overboard indicator, or MOBI.

A MOBI transponder, about the size of a clamshell-style cell phone, is clipped onto each life jacket. If a sailor falls into the water, salt water activates the MOBI’s beacon, which can be tracked aboard the ship.

But, according to Naval Safety Center statistics, most sailors who fall overboard aren’t wearing life jackets so they aren’t wearing a MOBI, Keithley said. “It seems like it’s happening during calmer times when guys aren’t prepared.”

The drone team is looking to develop a smaller transponder that would become part of a sailor’s daily wear at sea, perhaps attaching to a belt. The transponder would switch on by a combination of seawater and detecting too much distance from the ship, he said.

The drone would be automatically activated, and using homing capability, would find and hover near the man overboard.

They could do more than hover, however.

“They have a limited payload, so they could drop a life ring, dye, all kinds of things,” Keithley said. It could stream video back to the ship and, with a small speaker attached, rescuers could talk to a sailor in water, lessening panic.

Because the drones would be automatically launched and alert the ship’s crew, the search for a missing sailor would begin immediately, not hours after it was discovered that someone went overboard.

Keithley never fancied himself an innovator. In fact, he recalled Bretz having to drag him “kicking and screaming” to the iLab workroom he designed just inside the front entrance of the submarine training center.

On the wall is a photo of superhero Iron Man, who is equipped with an augmented-reality display informing him about conditions outside the metal suit. The photo is there to quickly convey the idea and potential for augmented reality to visiting sailors.

“Then they get it and start to be able to apply it to their situations,” Bretz said.

Keithley was won over by the gadgetry, and becoming familiar with it made him start thinking in new ways.

His idea for a search drone would never have come “sitting at my own desk staring at my computer screen,” he said. “I had to see the technology that’s available before making that next step to an idea. I think that’s the goal of iLab, to get everybody to the point where they just need to make one more step to an idea that could help sailors in the fleet.”

The lab has no restricted data or equipment, so access by sailors is direct and easy.

It’s also mobile, Bretz said, which allowed them to pack up for an iLab “road show” in April to the Trident Training Facility in Bangor, Wash.

ILab is running on a roughly two-year trial, Bretz said. “It may not be permanent. It depends on how many ideas we get, if we have some that make it to the fleet, if we have sailors engaged. But if not, we’ll shut it down.

“But in its first few months, it seems to be proving quite useful.”

One simple idea moving through the pipeline is putting together a library of 360-degree videos of foreign harbors and ports infrequently visited by Navy ships. Another prototype combines 3D mapping of the ocean floor with virtual-reality goggles and handsets that could be used for submariner training or during missions.

Sailors with ideas can message the team at cspilab@navy.mil.

The goal is to keep sailors in the loop if their ideas get traction.

“We think it’s very important to keep the guys involved so that they can keep on coming back here and know that all their effort and time is not wasted,” Keithley said. “We’re not just here to take what they have and run away with it. We want them to be part of the process.”