SEAL testifies in Bergdahl trial: ‘He’s an American … and he had a mom’ 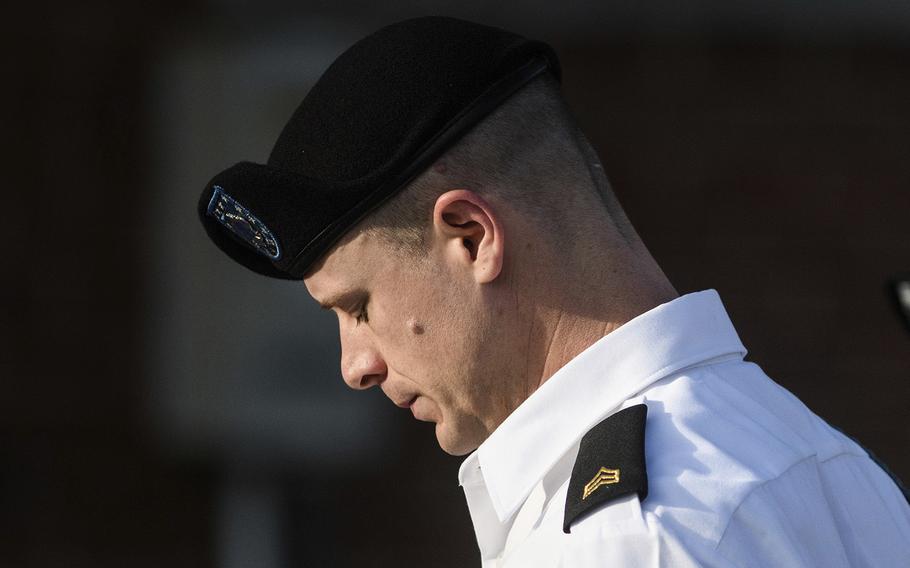 FORT BRAGG, N.C. — Special operators risked their lives to rescue Army Sgt. Bowe Bergdahl even though they knew he had deserted because “he’s an American” and “he had a mom,” a former Navy SEAL seriously wounded during the search testified Wednesday.

Retired Navy Senior Chief Petty Officer Jimmy Hatch took the witness stand in a Fort Bragg courtroom and described a quickly planned mission aimed at recovering Bergdahl after his unit received information about the soldier’s possible location in eastern Afghanistan about a week after his disappearance.

“Somebody’s going to get killed or hurt trying to find this kid,” Hatch recalled telling another member of his SEAL team before boarding helicopters to fly to the location where they believed they might find Bergdahl.

Four current and former soldiers who participated in other rescue operations to save Bergdahl also described in court Wednesday a massive and risky effort to find the then-private who without permission had walked off his tiny, remote combat post in the dangerous Paktika province.

“There was not a day that went by that there was not multiple direct-fire incidents and multiple [roadside-bomb] attacks,” said Army Col. Clint Baker, who was at the time the commander of Bergdahl’s 1st Battalion, 501st Parachute Infantry Regiment.

The U.S. military flooded eastern Afghanistan with additional Army units, helicopters, drones and airplanes as it accepted increased risk in the field and poured everyone possible from their forward operating bases and smaller posts for some 45 days as servicemembers tried to locate Bergdahl before the Taliban moved him into Pakistan, Baker testified. From the outset of search operations, Baker said engagements with the enemy in the region increased dramatically.

Last week, Bergdahl, 31, pleaded guilty to charges of desertion and misbehavior before the enemy, admitting he unlawfully left Observation Post Mest, endangering his fellow troops as they launched operations to find him. The military judge overseeing his court-martial, Army Col. Jeffery R. Nance, is expected to sentence the former Taliban captive next week. Bergdahl faces life in prison.

Army Capt. John Billings, then Bergdahl’s platoon leader, testified Wednesday that soldiers spent weeks in the field on those recovery missions with limited supplies, including one group that went 37 days without returning to a base.

He said soldiers in his command suffered from dysentery and were forced to wear soiled uniforms as they continued searching for Bergdahl.

“Imagine putting yourself on the side of a mountain with little water, little sleep and little chow, having not showered for 10 days and not knowing when you’d get a chance to talk to your family again,” Billings said. “That’s pretty much what it was like.”

Under questioning from the lead prosecutor, Army Maj. Justin C. Oshana, Hatch recalled his uneasy feelings about the mission to retrieve Bergdahl and how hours later, he was the one grievously wounded in an intense firefight when a militant sprayed AK-47 rifle fire at him, hitting him just above the right knee and shattering his femur. Hatch said he nearly bled to death.

But despite his concerns, Hatch said the SEAL team members were willing to take the risk to recover Bergdahl.

The former SEAL grew emotional as he described the life-saving actions of the unit’s military working dog, who pushed forward to attack enemy fighters who were firing on the SEALs from a ditch before he was hit with several bullets in the jaw, killing him.

"His name was Remco," Hatch said, pausing and wiping his eyes as his voice cracked.

After his injury, Hatch went through 18 surgeries to repair his leg, but has been left with a permanent limp. He was forced to retire from the SEALs, in which he had served for nearly 26 years.

Bergdahl, wearing his blue Army service uniform with sergeant stripes representing the rank he was promoted to while in captivity, sat stoically as he listened Wednesday to the testimony for about four hours, occasionally jotting down notes on a piece of paper.

On Thursday, Nance will likely hear from a Georgia Army National Guard veteran, former Cpl. Jonathan Morita, who was left with permanent hand injuries when he was hit by a rocket-propelled grenade on a mission to find Bergdahl. On Monday, the wife of another soldier horribly wounded on that mission, former Master Sgt. Mark Allen, is expected to testify about the rehabilitation and care for her husband, who was left paralyzed and unable to speak when he was shot in the head in the search for Bergdahl.

Defense attorneys are expected to call witnesses to testify about Bergdahl’s mental state and the horrid conditions, torture and failed escape attempts that he experienced during five years of captivity by a Taliban-linked militant group in Pakistan.

Bergdahl said during his plea hearing Oct. 16 that he walked off his post on June 30, 2009 in an attempt to reach a nearby base to complain about problems that he perceived in his chain of command. He said his actions were “inexcusable,” as he entered a guilty plea without any pre-trial agreement with the Army to cap his potential sentence.

Within hours of leaving the outpost, Bergdahl was captured by Taliban fighters and eventually smuggled into Pakistan where he was held. He was released in May 2014 in a controversial prisoner exchange for five Taliban commanders who had been held in the detention facility at Guantanamo Bay in Cuba.

Bergdahl was charged with “misbehavior before the enemy by endangering the safety of a command, unit or place” and “desertion with intent to shirk important or hazardous duty” in March 2015. The more serious misbehavior charges carries a maximum punishment up to life imprisonment, reduction in rank to private, forfeiture of all pay and a dishonorable discharge.

Nance on Wednesday postponed an announcement on his decision on an Oct. 17 defense motion to limit Bergdahl’s maximum sentence to no punishment or at least no confinement because of a comment last week made by President Donald Trump.

Trump recently referenced his disparaging comments about Bergdahl that the president repeatedly delivered as a candidate when he was questioned Oct. 16 during a White House news conference about the soldier’s court-martial.

Defense attorneys earlier this year unsuccessfully attempted to have their client’s case dismissed over Trump’s campaign trail rhetoric. They documented more than 60 instances when Trump referred to Bergdahl, including calling him a “dirty, rotten traitor,” and promising to review Bergdahl’s case if he was elected president.

Eugene Fidell, Bergdahl’s lead attorney, asked Nance on Monday to limit Bergdahl’s sentence to alleviate any perception the judge — an active-duty Army officer under Trump’s command — and other Army officials were influenced by the commander in chief, which would amount to unlawful command influence.

Prosecutors countered Trump’s statement Oct. 16 did not disparage Bergdahl or refer to any particular punishment the soldier should receive, thus Nance had no need to limit the maximum potential punishment.

“I’m still considering it,” Nance said of the motion.

But the judge will have to rule on the motion before he sentences Bergdahl, who has remained on active duty since he was released, serving in a desk job at Joint Base San Antonio in Texas and has not been held in pretrial confinement.