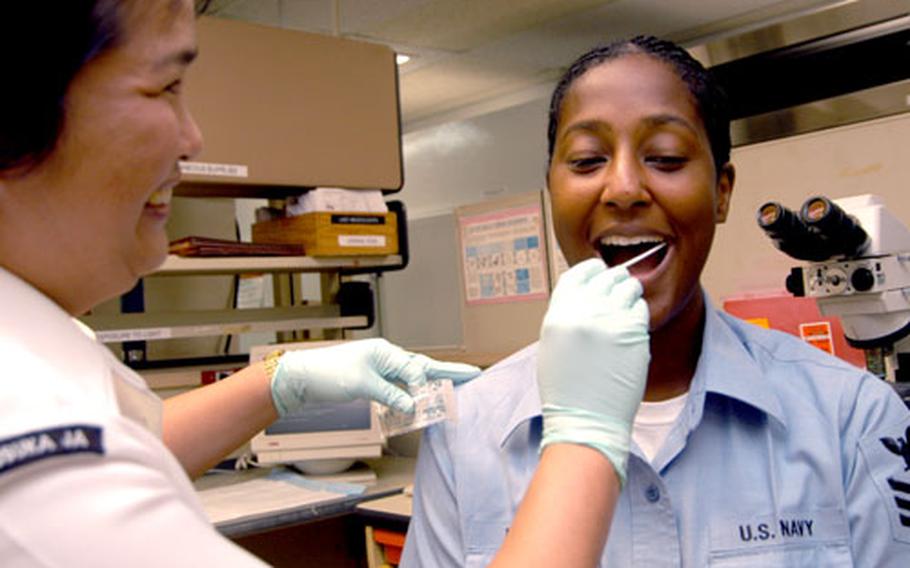 Four cheek swabs is all it takes to determine one’s eligibility for being a bone marrow donor and being added to the National Bone Marrow Registry, as demonstrated by Petty Officer 1st Class Rona Baluyot, left, and Petty Officer 1st Class Michelle McCray at U.S. Naval Hospital Yokosuka on Monday. The base’s first bone marrow drive will be held Oct. 5. (Allison Batdorff / S&S)

Then his luck turned into a Vegas dream.

&#8220;Basically, I hit the bone marrow lotto jackpot,&#8221; Justin said in an e-mail Monday after finding not one, but three donors.

The 27-year old SEAL (his last name is not disclosed as a matter of Department of Defense policy) has acute lymphocyte leukemia &#8212; a fast-acting cancer of the blood. The donors were found through a series of bone marrow drives organized by his friends.

Lt. Steve Tarr of Submarine Group Seven at Yokosuka Naval Base is one of those friends. He knew Justin at the U.S. Naval Academy and they lived just a hometown away from each other in New Jersey.

But Justin&#8217;s luck turned before Tarr could follow through with his marrow drive, scheduled from 9 a.m. to 3 p.m. Oct. 5 at Yokosuka&#8217;s Fleet Gym. Nevertheless, Tarr is pressing forward.

&#8220;Although matches have been found for Navy SEAL Justin, there are other members out there in the DOD/civilian world who do not have a match and are fighting for their life,&#8221; Tarr said. &#8220;We can still help out the others going through this.&#8221;

Four cheek swabs and 15 minutes can now determine a person&#8217;s human leukocyte antigen, or HLA &#8212; the genetic markers found on all body cells that determine white blood cell types. The oversized cotton swabs are sent to the DOD&#8217;s marrow program for testing. Ten markers need to match for a bone marrow transplant, which is used to combat different types of leukemia, lymphomas, anemia and some immune system and metabolic disorders.

Bone marrow &#8212; a substance McCray describes as &#8220;spongy-yellow red material&#8221; &#8212; is soft tissue within the bones and makes blood cell and platelet production. It is extracted using a special needle and syringe from the pelvic bone while the donor is under a local anesthesia. The donor stays overnight in the hospital and resumes normal activity after five to seven days, she said.

This will be the first time a bone marrow drive will be conducted at Yokosuka Naval Base, but the DOD is part of a national effort to recruit HLA volunteers.

According to the DOD pamphlet, the program&#8217;s primary objective is to rescue military casualties from radiation or mustard gas attacks, which affect bone marrow. Also, military personnel meet the age and health requirements needed to donate and already provide the country&#8217;s largest source of whole blood donations.

Justin&#8217;s transplant is scheduled for the end of October.