Seabees work on Okinawa with Mississippi on their minds 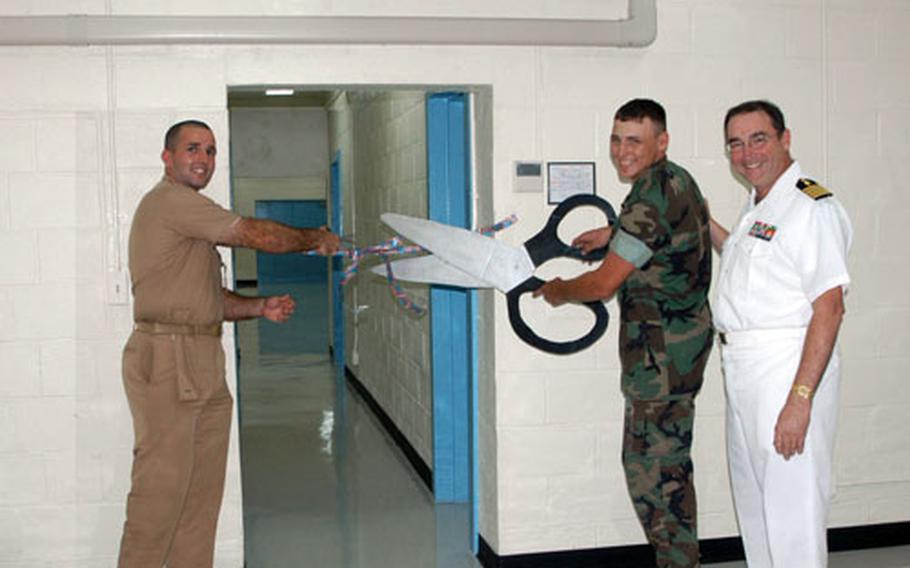 LT j.g. Howard Smith exits the recently renovated hut that will be used by the hospital for staff education and training section. (Amanda Woodhead / U.S. Navy)

CAMP LESTER, Okinawa &#8212; With their home base in hurricane-ravaged Mississippi on their minds, members of a Seabee unit here completed the renovation of an old building that will provide classroom space and offices for hospital personnel.

The ribbon cutting at Building 6046, a Quonset hut built in 1955, was held Friday. The building had been gutted completely and spruced up with an all-new interior, according to Lt. j.g. Howard Smith, head of U.S. Naval Hospital Okinawa&#8217;s Public Works Department.

The facility was given a new, tile-covered cement floor, toilet fixtures and plumbing, insulation, air conditioning, lighting, paint and doors. Smith said the windows also were removed and the building was made watertight.

Naval Mobile Construction Battalion 74, a Seabee unit currently deployed to Okinawa from Gulfport, Miss., handled the project. The work took place from June to September, during which Hurricane Katrina in late August devastated the Gulf Coast.

&#8220;It was a little difficult to stay focused when we were worried about our families, homes and other co-workers,&#8221; said Petty Officer 2nd Class Charles W. Reed III, a construction electrician with the unit. &#8220;Some of our unit members took leave to go back and see about their families &#8230; our command was really supportive of those who had needs.&#8221;

Reed said that when the Seabees began work on the building, it was in &#8220;pretty bad shape&#8221; and had not been used in several years. He said rust and water damage were extensive and termites had feasted on the wood in the structure. But a strong foundation worked to the Seabees&#8217; advantage.

Smith said the hospital&#8217;s Staff Education and Training Department will use the refurbished building, and the Quonset hut&#8217;s large, open space will be good for classrooms.

The hospital&#8217;s commanding officer, Capt. Peter F. O&#8217;Connor, said he was thrilled when he heard Seabees would be renovating the old building.

&#8220;These renovations will provide for classroom space and allow us to continue our mission. Despite numerous taskings and concern over family members affected by Hurricane Katrina, they continued this job with undiminished quality.&#8221;

&#8220;The Quonset hut is an important part of naval history,&#8221; he said. The buildings, which were omnipresent on military bases after World War II, are best known for their semi-circular, corrugated metal roofs.

&#8220;The structures are remarkably sturdy and incredibly space efficient,&#8221; Smith said. &#8220;Quonset huts are one of the truly great engineering designs out there and were originally developed for the U.S. Navy.&#8221;