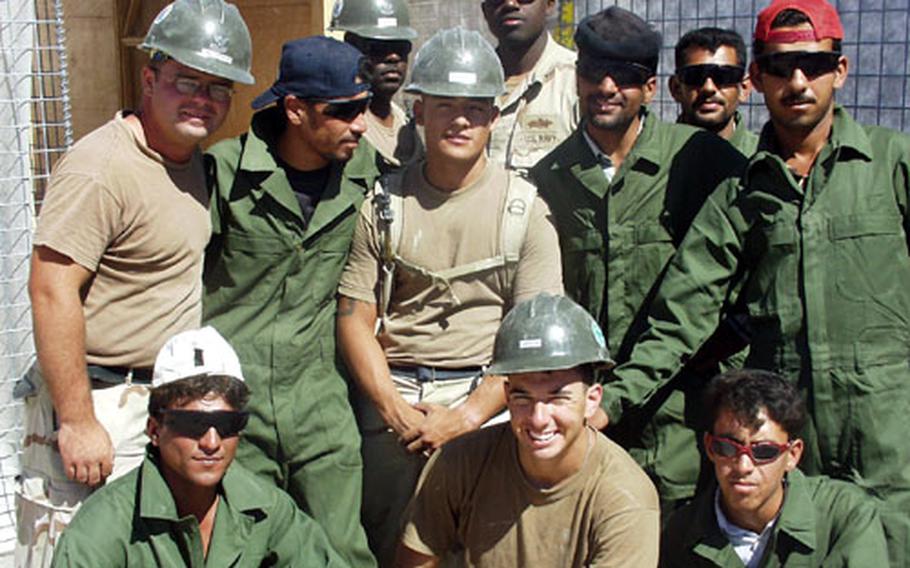 FALLUJAH, Iraq &#8212; If everything were this easy, maybe the fighting would be over.

Boutot, a 27-year-old from Augusta, Maine, and Naval Mobile Construction Battalion 74 are helping run an apprentice program for local men as part of the Fallujah Liaison Team, which was established to bridge the gap between U.S. forces and Iraqi contractors and laborers.

When he met the 11 Fallujah-area men, Boutot said he did not consider them enemies, even though Fallujah has been a hotbed of resistance to the U.S.-led coalition.

The Fallujah Liaison Team center is on an approximately seven-acre site on the outskirts of Fallujah. The site is called a Civil Military Operations Center, or CMOC. It&#8217;s a place where Iraqi authorities, coalition members and local contractors who are bidding on construction jobs can meet.

For security reasons, there are U.S. tanks and troops parked nearby around the clock.

&#8220;We&#8217;ve had several people who are trying to blueprint the idea and establish it in other areas.

At the center, the Seabees teach carpentry, masonry, electrical work and plumbing to the young Iraqis, who earn $8 a day plus lunch. They are putting up new buildings at the site.

The Seabees could use a few more translators, Boutot said, to help with the lessons. There is a shortage of translators in Iraq to assist communication between English- and Arabic-speaking people. This team of Seabees manages with just one translator.

The U.S.-Iraqi convergence was awkward at first.

Saad Fadel Aziz, a 23-year-old from a nearby village, said the Americans are kind and helpful. He said that doesn&#8217;t eliminate the pressure he feels as an Iraqi working with the foreign occupiers.