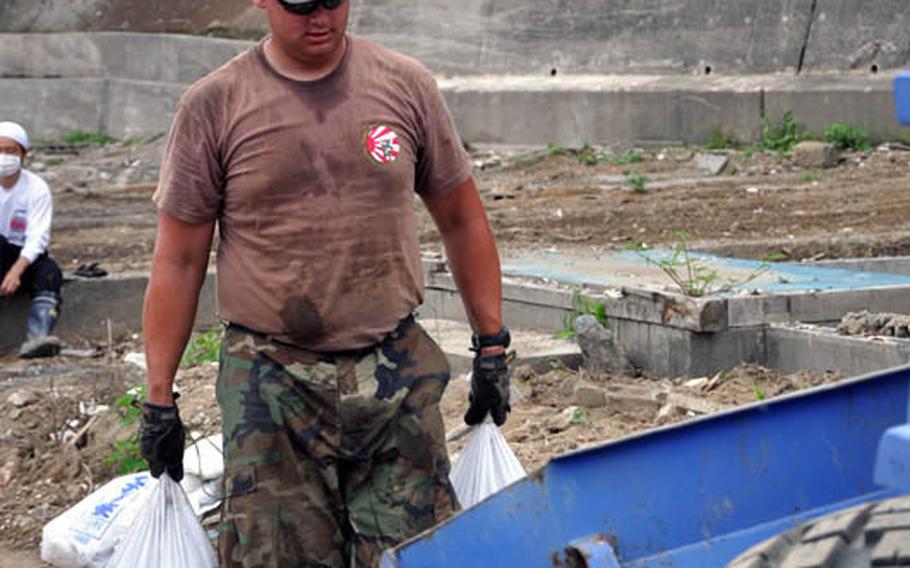 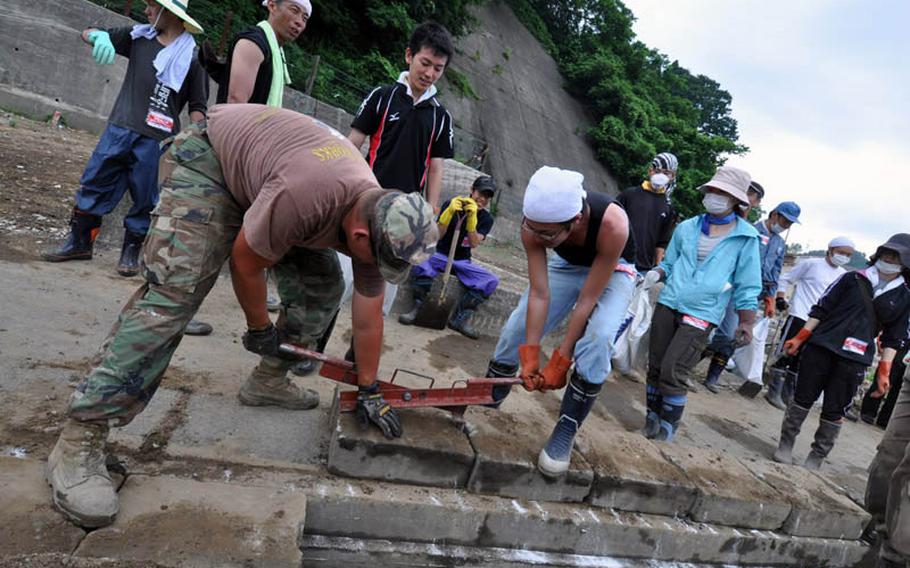 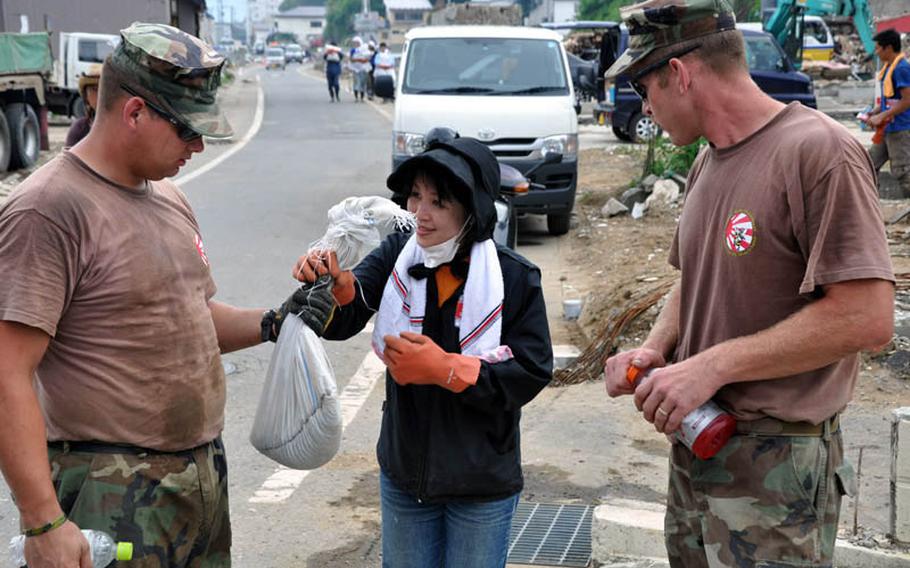 A Japanese clean-up volunteer politely hands Petty Officer 1st Class Joshua Thonnissen, left, a partially filled bag of debris while Chief Billy Knox, right, looks on, Thursday in Miyako, Japan. The two Seabees joked with the woman, asking her if it was a Christmas present. (T.D. Flack/Stars and Stripes) 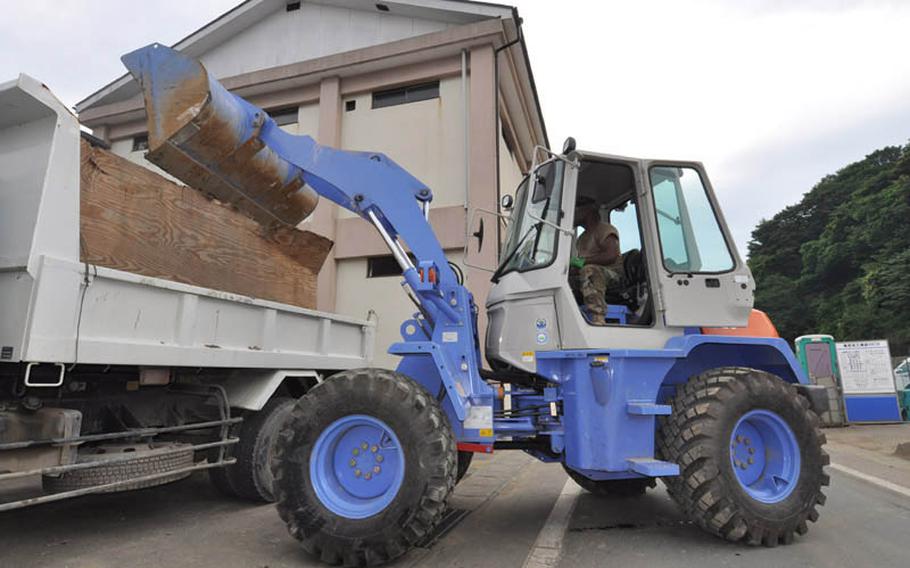 Petty Officer 2nd Class Charles Hannah dumps a heavy load of sandbags filled with debris Thursday in Miyako, Japan. The city was devastated by a March 11 tsunami, and Hannah and two other Seabees have spent four weeks there helping clean the city. (T.D. Flack/Stars and Stripes) 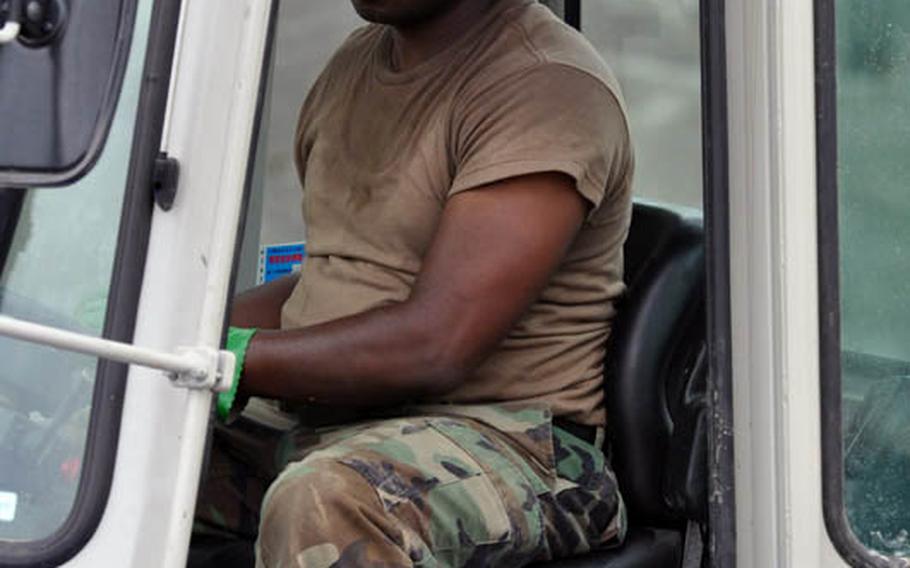 Petty Officer 2nd Class Charles Hannah maneuvers a front-end loader Thursday through a Japanese neighborhood in Miyako, Japan, that was devastated by a March 11 tsunami. (T.D. Flack/Stars and Stripes) 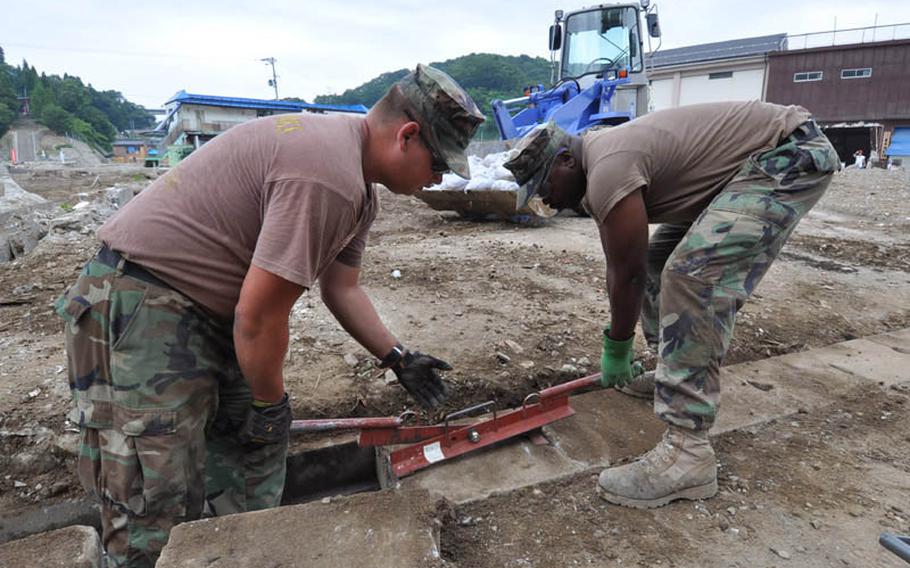 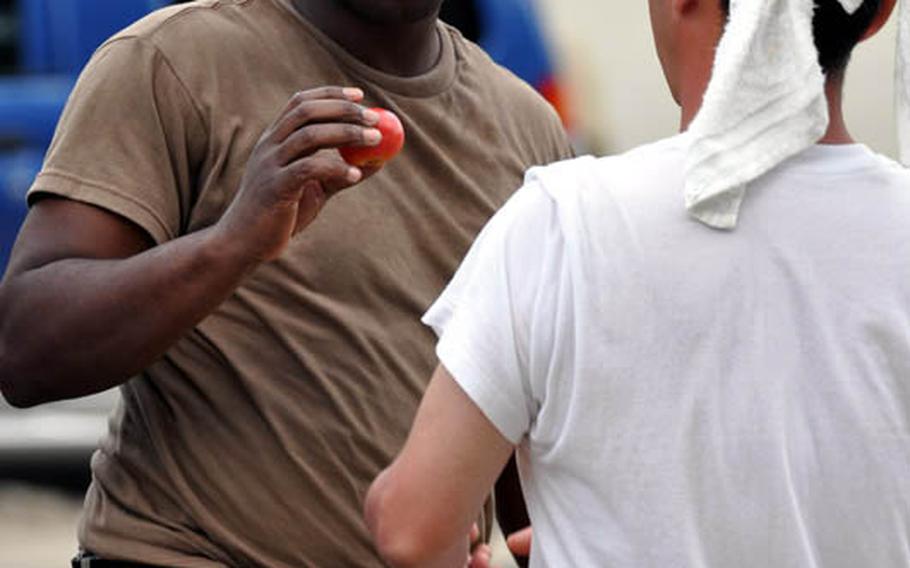 Petty Officer 2nd Class Charles Hannah accepts a tomato from a Japanese volunteer during a break Thursday while working in Miyako, Japan. (T.D. Flack/Stars and Stripes) 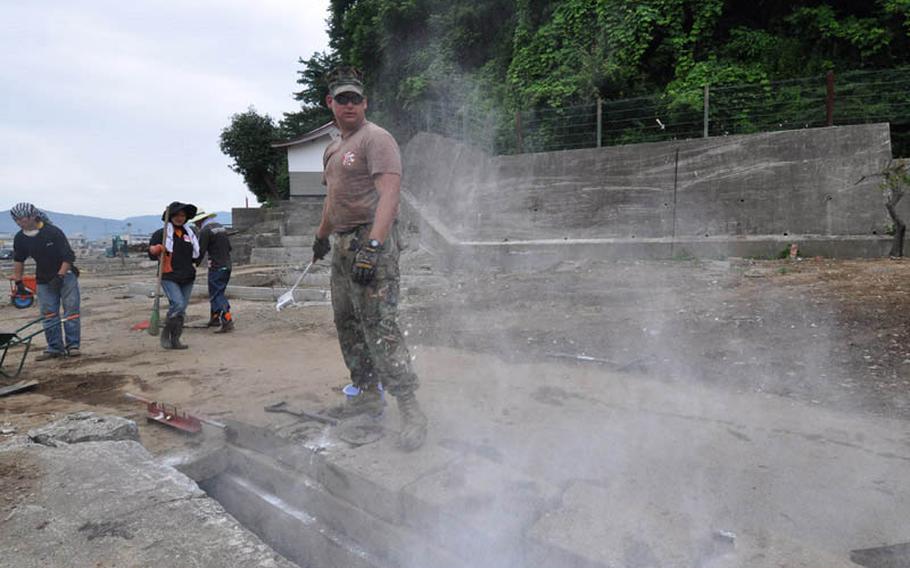 Petty Officer 1st Class Joshua Thonnissen tosses a powder meant to help kill bacteria into a drainage ditch in Miyako, Japan, on Thursday. Thonnissen is one of three U.S. Navy Seabees currently working to help Japanese residents recover from a deadly tsunami that raced through the coastal city on March 11, following the massive earthquake that rattled the island nation. (T.D. Flack/Stars and Stripes)

They work through long shifts of manual labor with two Navy front-end loaders and a dump truck and then sleep on Japanese tatami mat floors in a community center in Tanohata &ndash; about three hours south of Misawa Air Base. They carry their own food, barbecuing dinner each night, and they make do with baby wipes and a sink to clean themselves because the center doesn&rsquo;t have shower facilities.

And even though temperatures are climbing, the Seabees &ndash; sweaty, dusty and dirty in their uniforms &ndash; said they&rsquo;re loving every minute of it.

Being away from family is never easy, but &ldquo;They&rsquo;re happy that we&rsquo;re out there doing as much as we can helping&rdquo; Japan with its recovery efforts, he said.

The mayor of Tanohata &mdash; where base volunteers were working at the time &mdash; submitted a letter officially requesting the Navy&rsquo;s help and heavy equipment, Knox said. Even as the U.S. military phased out of actively assisting Japanese recovery efforts via Operation Tomodachi, this small team has continued working.

Knox and his crew spent five weeks in Tanohata, working Monday through Friday and coming home to rest, recover and spend time with family each weekend. Military orders took Martin out of the country as they were finishing up with Tanohata, Knox said.

Now, it&rsquo;s only three Seabees who work four days a week in Miyako, about four hours south of the base. The Tanohata officials &ndash; who they&rsquo;ve developed a strong relationship with &ndash; allow them to stay in the community center so they only commute about an hour one-way each day.

The Seabees have been working in coordination with the Miyako volunteer center. Center officials tell them where they&rsquo;re needed each day, pairing them up with volunteers who come from all over Japan.

On Thursday, they were working with a group of about 50 Japanese volunteers who had traveled to the area to help. The volunteers joked in Japanese about the strength of the Seabees, marveling at the ease in which they were able to manhandle heavily loaded wheelbarrows and toss sandbags filled with heavy sludge.

&ldquo;We came from Nagano to help out,&rdquo; said one man in Japanese, before asking what military ranks the Seabees were.

Communication can be difficult, Knox explained, but they do their best.

The Seabees said they&rsquo;ve had countless encounters with local citizens who bring them snacks and cold drinks, bowing in thanks to the men in sweat-stained uniforms.

The Seabees think they&rsquo;ll finish up at Miyako in about two weeks, and Knox isn&rsquo;t sure if they&rsquo;ll continue on in another community. He &ldquo;hopes so,&rdquo; but it depends on whether the communities ask for help.

Knox said he hopes that years from now, he&rsquo;ll be able to look back and marvel at what a difference a few Seabees were able to make after the tsunami.

And he&rsquo;s sure that the Japanese people they&rsquo;ve met and worked with will think the same thing, that the Seabees &ldquo;helped us out and did so much with so little.&rdquo;