Seabees in the spotlight at U.S. Navy Memorial 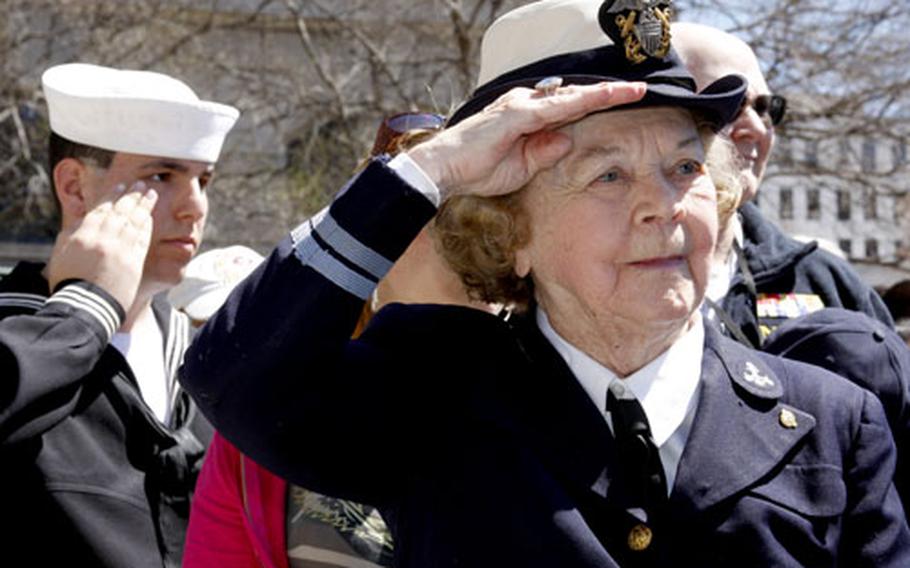 Ruthanna Weber, a 94-year-old World War II veteran from Maryland, salutes during the Blessing of the Fleets Saturday at the U.S. Navy Memorial. For more photos and a video, see the links at the top of the story. (Joe Gromelski / S&S)

WASHINGTON, D.C. &#8212; Although Saturday&#39;s Blessing of the Fleets at the U.S. Navy Memorial featured the pouring of water from the seven seas and the Great Lakes into the memorial&#39;s fountains, the focus was on a group of men and women who often work far from the ocean &#8212; the construction battalions, better known as Seabees.

Before a large crowd that stopped by during the city&#39;s Cherry Blossom Festival, Rear Adm. Wayne G. Shear, Jr., commander of the Naval Facilities Engineering Command and Chief of Civil Engineers delivered the keynote remarks.

"Right now, a Navy ship is flying the flag of the United States in literally every corner of the globe," Shear said. "In partnership with the Marine Corps and the Coast Guard, co-signers with the Navy on our maritime strategy, our Navy is protecting and controlling sea lanes around the world ... projecting power, responding to disasters and providing humanitarian assistance.

"We are training and operating in partnership with nations that share our desire for freedom of the seas, and who recognize the linkage between safe passage and global prosperity."

Shear also spoke about some of the projects in which Seabees are taking part, often to little fanfare, in such places as Africa, Afghanistan and Southeast Asia.

Later, sailors from the Washington-based U.S. Navy Ceremonial Guard joined Force Chaplain Capt. Steven D. Brown of the 1st Naval Construction Division in the annual Blessing of the Fleets. Water brought in from around the world was poured to "charge" the memorial&#39;s fountains after being turned off for the winter.

Guests were then invited to visit the memorial&#39;s new Seabee exhibit and sample traditional Navy Bean Soup, as prepared by cooks from the Navy White House Mess.

Among the visitors for the Blessing of the Fleets was 94-year-old World War II veteran Ruthanna Weber of Kenwood, Md., who recalled the details of her decision to join the Navy.

While riding on a train from graduate school back to her family&#39;s home in Findlay, Ohio, she saw a recruiting billboard saying "we need you."

"I got off the train in Chicago," she said, "and got in a cab and went (to the recruiting station). Within two hours I was in the Navy. My mother was horrified, but my father was delighted. He was a Spanish-American War veteran."

Weber spent most of the war teaching code to servicemembers at Smith College in Massachusetts. Since she was a schoolteacher with a music degree, she was also pressed into service working with the 50-voice WAVE choir.

"Every evening I was at the piano, and the WAVES were singing," she said.

Felicia Joseph of the Stripes staff contributed to this story.