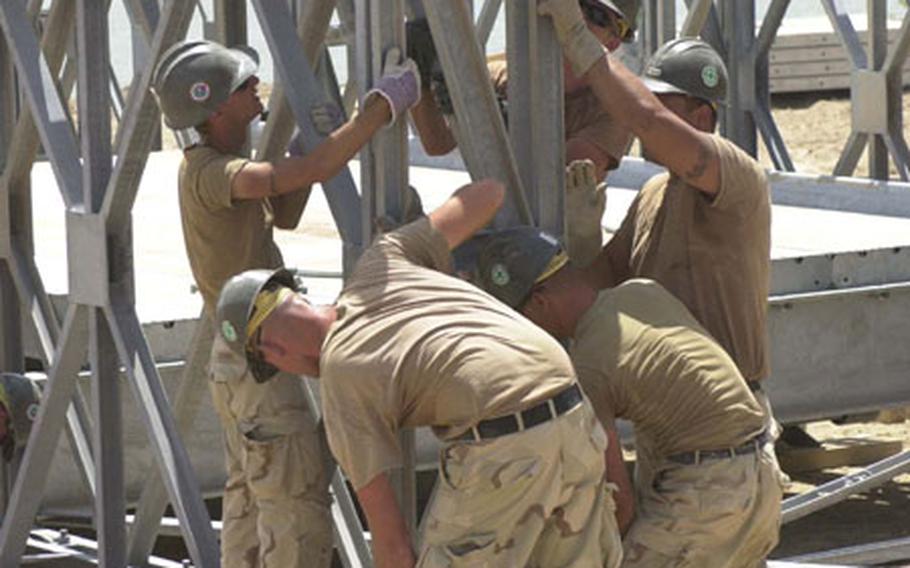 Seabees from Naval Mobile Construction Battalions 133 and 7 construct a bridge bay in Zubaydiyah, Iraq. The Seabees are in the area to build a Mabey-Johnson bridge to replace one that was destroyed during Operation Enduring Freedom. (Courtesy of U.S. Navy)

Seabees from Naval Mobile Construction Battalions 133 and 7 construct a bridge bay in Zubaydiyah, Iraq. The Seabees are in the area to build a Mabey-Johnson bridge to replace one that was destroyed during Operation Enduring Freedom. (Courtesy of U.S. Navy) 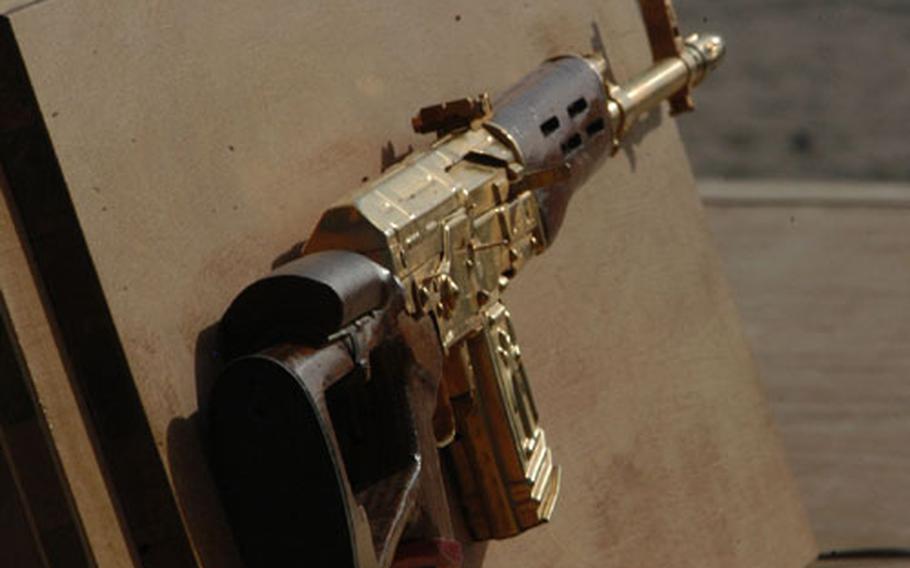 On Tuesday, to thank them and show the appreciation of their fellow servicemembers, Marine Lt. Gen. James T. Conway, commander of the 1st Marine Expeditionary Force, came to the Seabee base in Kuwait to thank the sailors and their commander, Rear Adm. Charles Kubic.

Conway presented the sailors and Kubic, who commands the Seabees and the 1st MEF Engineer Group, a gold-plated trophy rifle that Conway said once belonged to former Iraq leader Saddam Hussein&#8217;s son Odai.

Naval Mobile Construction Battalions, also known as CBs or Seabees, build the skeleton on which servicemembers work and live. They build the wooden ribs and floors for tents and create cities and airports out of sand, wood and gravel.

&#8220;It was essentially habitability for the Marines and also civil military operations,&#8221; said Lt. Ralph Field, commander of Company A of NMCB 133, based in Gulfport, Miss., and previously in charge of operations in Karbala, Iraq.

The Seabees are also helping Iraq rebuild. Construction battalions generally do humanitarian work, but not usually during and immediately after combat.

Seabees usually arrive with a set mission in combat. In Iraq, they found themselves engaging in unexpected projects as they went along. For example, after a hospital in Karbala lost its water purification system, people began getting sick. So the Seabees helped a nongovernmental organization install a new one that now produces 600 gallons of clean water a day, Field said.

Among their largest projects was the Zubadiyah Bridge, a 200-meter pontoon bridge pieced together to span the Tigris River north of Al Kut &#8212; the longest pontoon bridge constructed since World War II. Work was completed two weeks ago.

About 200 people total were involved in the project: Navy construction and amphibious battalions, Marines and soldiers.

Seabees built an entire camp to support the bridge work and workers.

Seabees have completed about 60 large projects between Kuwait and Iraq and hundreds more small projects.

Construction battalions bring with them a mixture of specialties and assets. They have builders, electricians, steelworkers and equipment operators along with a contingent of support groups. Their inventory includes everything from heavy equipment, such as massive bulldozers, to a ready supply of nuts and bolts.

The Seabees didn&#8217;t suffer any casualties in combat. However, one sailor died last month from unexploded ordinance, Field said.