Seabees from Okinawa help counterparts get by in muddy S. Korea 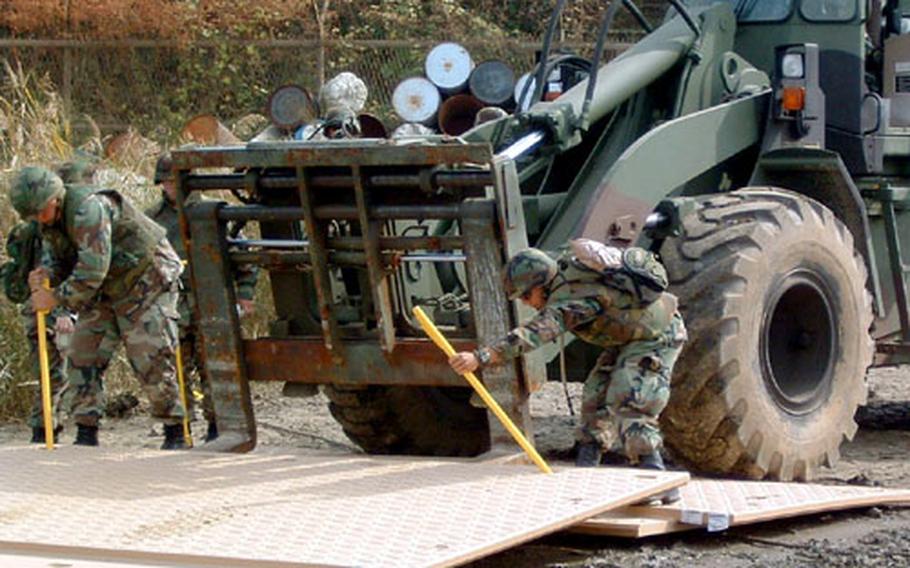 On muddy terrain near a South Korean river earlier this month, U.S. Navy Seabees assemble heavy-duty plastic matting to help combat vehicles get across the marshy ground. The Seabees, of Naval Mobile Construction Battalion 133 on Okinawa, are in South Korea with U.S. Marines for a month of combat engineer training with their South Korean marine and army counterparts. (Photo courtesy of U.S. Navy)

On muddy terrain near a South Korean river earlier this month, U.S. Navy Seabees assemble heavy-duty plastic matting to help combat vehicles get across the marshy ground. The Seabees, of Naval Mobile Construction Battalion 133 on Okinawa, are in South Korea with U.S. Marines for a month of combat engineer training with their South Korean marine and army counterparts. (Photo courtesy of U.S. Navy) 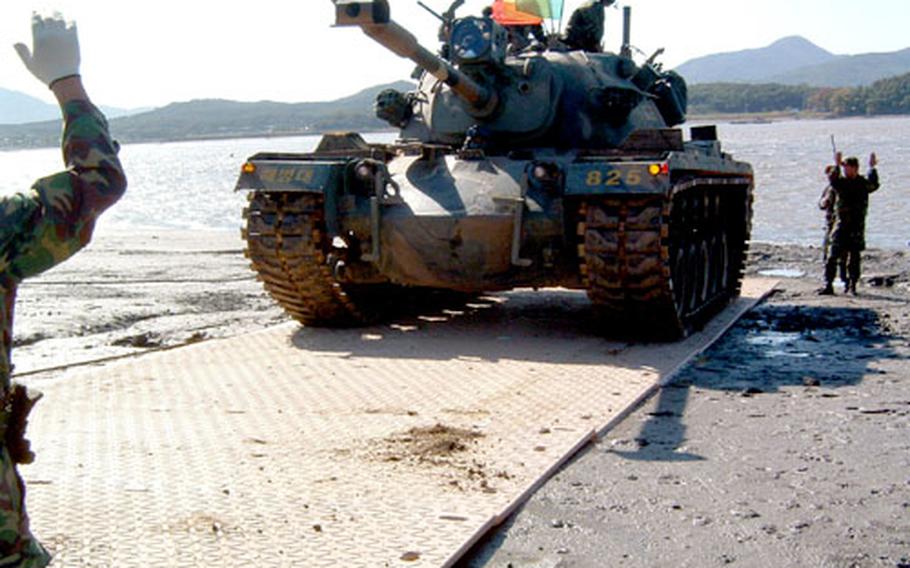 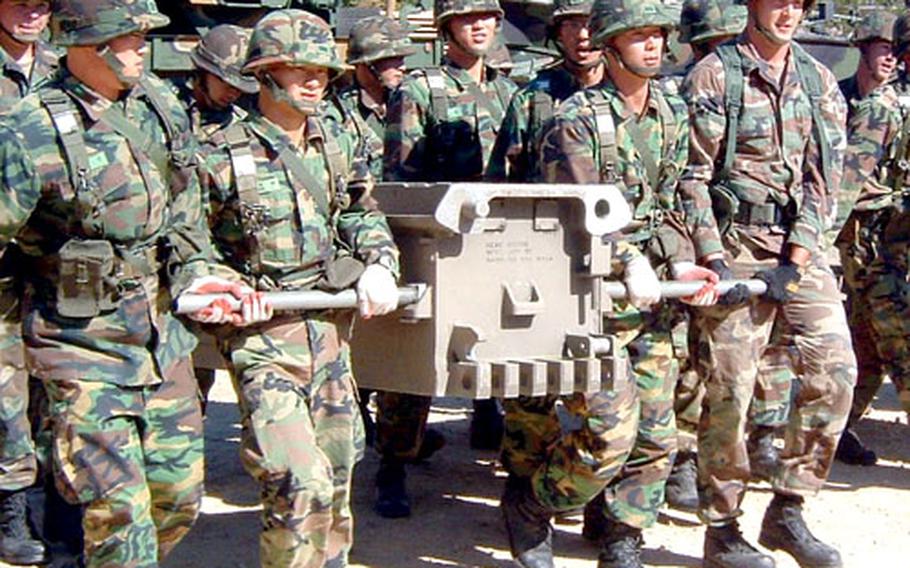 PYONGTAEK, South Korea &#8212; Navy Constructionman Wesley Newell recalls being a bit dubious when he learned the battlefield engineering task he and 29 fellow-Seabees would have to carry out when they deployed from Okinawa to South Korea.

Members of Naval Mobile Construction Battalion 133 were to go to a muddy area near a South Korean river and lay down heavy-duty plastic mats that can help troops and combat vehicles cross marshland, swamps or other wet, mucky terrain.

Known as Dura-base mats, they weigh 1,000 pounds each, measure 8 feet by 14 feet and are about 4 inches thick.

Seabees are Navy engineers trained to perform a variety of war-zone engineering tasks &#8212; construct bridges on the battlefield, lay or repair runways or major roads &#8212; especially in support of U.S. Marines.

They arrived earlier this month with some 400 Marines from Okinawa for a month of combat engineer training with South Korean marine and army units. The Marines, from the 3rd Marine Expeditionary Force, deploy twice a year to South Korea under the Korean Incremental Training Program, or KITP.

The mats have been used in Iraq and elsewhere by the U.S. military but, until now, never had been tested in South Korea&#8217;s terrain and weather conditions, said Navy Lt. Phil Levallee, officer in charge of the Seabee element taking part in KITP.

On Oct. 11, the Seabees tested the mats on a muddy stretch near the Yom-ha River northwest of Seoul, Levallee said. First, using forklifts and other heavy equipment, the Seabees laid down their mats. Then they drew on their engineering know-how to lock the mats to each other.

&#8220;Then came our first real test of the material,&#8221; said Levallee. &#8220;The Korean marines launched 30 amphibious assault vehicles down this matting. Then, after they launched off of there, the Korean army was able to use it to launch some of their assault bridging rafts off of it.&#8221;

The demonstration is set for Thursday at a point along the Han River east of Seoul, Levallee said.

&#8220;There&#8217;s a very large benefit, not only training with this new material but establishing that relationship with U.S. Marines and South Korean forces,&#8221; Levallee said, &#8220;in the event we ever have to stand side by side and work together for real.

&#8220;And you hear about the DMZ, about North and South Korea, and you have the opportunity to traverse the terrain and see the challenges that are encountered in the area. I think it is a very valuable opportunity for these Seabees,&#8221; he said.

He was especially impressed, he said, when he got to work with South Korean combat engineers in assembling a medium-girder bridge.

&#8220;The way they staged it, and laid out their bridge, was to a T,&#8221; said Newell. "They had everything planned. Everything was staged, so it could be picked up, put in place, and moved onto the next piece. Their operation was &#8230; precision. And putting up that bridge was done very fast.