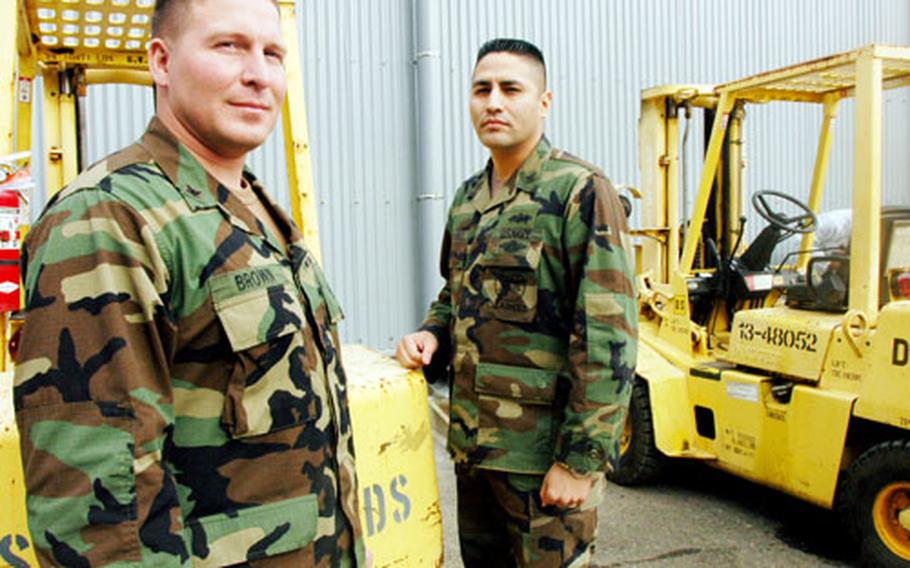 YOKOSUKA NAVAL BASE, Japan &#8212; Seabees Christopher Brown and Paul Ramirez didn&#8217;t know if they&#8217;d be electrocuted or squashed by an inbound train when they jumped onto the subway tracks in Tokyo on Jan. 20.

But the two petty officers first class had to &#8220;do something&#8221; after watching a Japanese man pitch forward headfirst onto the tracks around 7 a.m. at Roppongi Station, they said.

If they hadn&#8217;t pulled him out, both men said they are pretty sure the guy would have been run over.

The rescued man, in his 30s, was bleeding profusely from his head and leg, according to a worker at Tokyo Metro&#8217;s Roppongi Station.

The Seabees said they called for the station&#8217;s first aid kit, and with the help of an English-speaking Japanese woman, wrapped the deep gash on the man&#8217;s head and tried to keep him out of shock until the ambulance arrived.

Moments before the incident happened, the two sailors had been sitting at the station waiting for a train back to Yokosuka Naval Base after a night in Roppongi. Brown and Ramirez said the man was slumped over one seat away from them. But when a train pulled in on the opposite side of the platform, the Japanese man ran forward as if he was going to board it, then fell on the closer set of tracks, the Seabees said.

They said they didn&#8217;t know whether the man was drunk, suicidal or just disoriented.

Both men are a part of small detail from Naval Mobile Construction Battalion 3, which arrived at Yokosuka in December for a six-month deployment.

Both have been in the Navy more than 10 years, but it was Brown&#8217;s first time directly applying the first aid and combat lifesaving training they get in their home base of Port Hueneme, Calif., he said.

And while neither of the men really want recognition, they do want to know what happened to the rescued man, they said. When contacted by Stars and Stripes, a hospital spokesman would not confirm whether the man was a patient or release his condition.