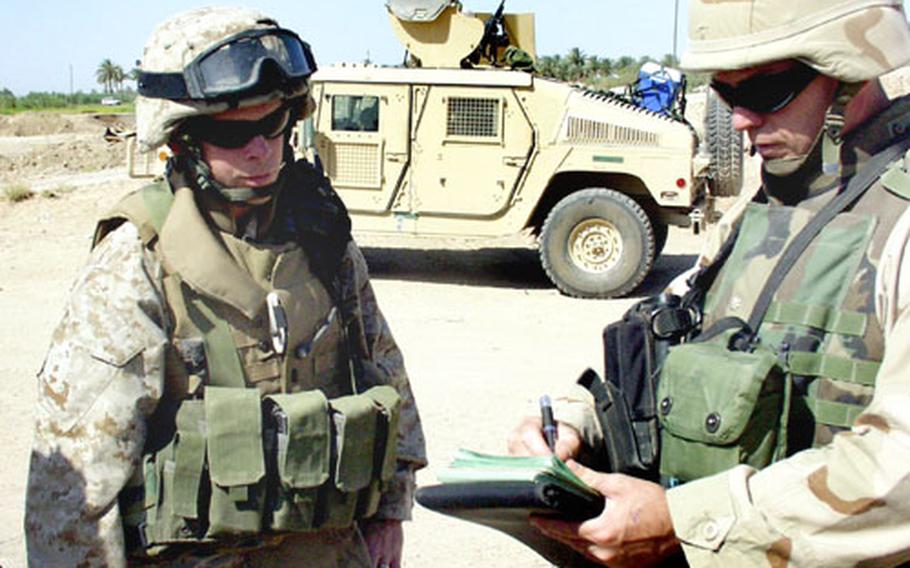 Navy Lt. Cmdr. Joe Stricklin, right, of Greenville, Ga., and Marine 1st Lt. Samuel Cunningham of Indiana, Pa., take notes on the site of a future Iraqi Civil Defense Corps camp about 10 miles southwest of Fallujah, Iraq, during their visit on Saturday. Safety concerns mean the Seabees, who belong to the Navy’s construction division, will spend just one hour appraising the site before loading up and heading out. (Charlie Coon / S&S)

NEAR FALLUJAH, Iraq &#8212; The Navy Seabees were guarded by well-armed Marines as they checked out the future site of an Iraqi military camp.

If the project moves forward, it would pump money into the local economy while helping a small slice of Iraq take a step toward self-governance, military officials said last week.

There are still people here with rocket-propelled grenades and other weapons hoping to get a clean shot at U.S. troops, even ones like the Seabees, whose main job is to build.

So the Seabees, who belong to the Navy&#8217;s construction division, spend just one hour appraising the site before loading up and heading out.

The convoy pulled into a 10-acre lot that used to belong to the Ministry of Water. It consists of dirt, some holes in the ground and dozens of small piles of rocks and debris.

By the end of summer, it could be home to about 120 troops of the reservist-like Iraqi Civil Defense Corps. The camp would be surrounded by two security walls and have guard towers, a rifle range, living quarters and offices.

Marine Capt. David Nasse of the 2nd Battalion, 2nd Marine Regiment, which escorted the Seabees to the site, said he hoped the project would give the area a shot in the arm.

Getting the project on track will take some doing.

After the Seabees write up a job description for the project, the job will be posted for bid at the office of the Fallujah Liaison Team, which is located near Camp Fallujah. Local Iraqi contractors will get a week to look at the specifications and prepare bids.

Like the Seabees, the contractors prefer to be discreet. To Iraqi insurgents, anyone who works with the Americans is considered an enemy. So bidding is done on the sly.

As for the Iraqi contractors, just like ones in the United States, every person with a pickup truck and a toolbox isn&#8217;t a reputable builder. So the low bidder doesn&#8217;t always get the job, according to Stricklin, who works in the Navy&#8217;s Office in Charge of Construction at Camp Fallujah.

Once the winning bid is determined, the Seabees will oversee the contractor&#8217;s work, paying him in cash as he finishes various stages of the project.

Projects are funded mostly with money from Iraqi oil revenues, although some also use cash confiscated from the former regime or U.S. tax dollars.

The work itself should be simple. Similar jobs are under way in the nearby towns of al-Karmah, Nassar Wa al-Salaam and Sagawiyah.

Stricklin said Iraqi villagers seem to appreciate what the coalition is trying to achieve. It&#8217;s in cities such as nearby Fallujah, where four American contractors were ambushed March 31 and their burned bodies were hung from a bridge, where resistance seems to be most acute and deadly.