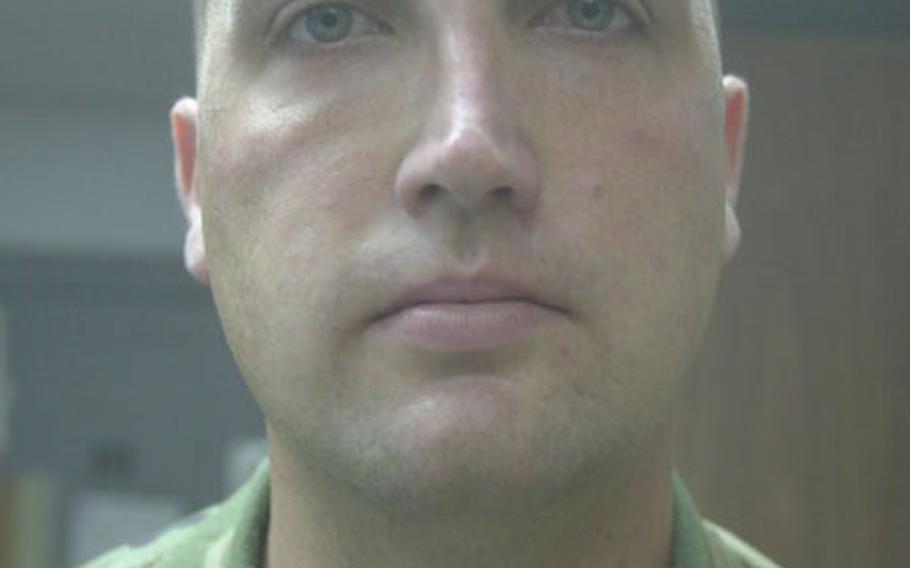 Navy Petty Officer 3rd Class Heath Snow tries to avoid a bull after getting thrown off it at the Ventura Rodeo in California in May. The Navy Seabee works as a professional bull rider in his spare time. (Courtesy of Ruth Kennedy)

When he isn&#8217;t deployed or taking care of Naval Mobile Construction Battalion FOUR&#8217;s armory, you&#8217;ll likely find the Seabee at a rodeo moonlighting as a professional bull rider. The Texan competes in about 20 rodeos a year as a member of the Professional Rodeo Cowboys Association, the nation&#8217;s premier rodeo circuit.

Snow, 28, of Abilene, Texas, rode his first bull when he was 16 years old. He has been riding ever since.

Although both his father and grandfather rode bulls, his mother didn&#8217;t approve of him doing it. He had to sneak out with his friend to a ranch where he could satisfy his admitted addiction.

He didn&#8217;t do well in his first small rodeo, but got better with practice.

Petty Officer 2nd Class Maurice Johnson, 35, said Snow, his good friend, is one of those people who seem deceivingly quiet and soft-spoken at first impression.

To prepare for a rodeo, Snow pumps iron, runs and works with &#8220;practice bulls&#8221; that are tamer than those in competition.

A good bull rider must be in top physical condition, but a 2,000-pound bull can still punish the best athlete with one buck.

There have been some scary moments. Last May, the chute opened before Snow was ready. The bull spun Snow around several times before trampling him. If not for the intervention of a rodeo clown, Snow believes he could have been crushed by the animal and possibly killed.

He walked away with a separated ankle, a sprained wrist and the tendons separated from his knee. His fianc&#233;e, Ruth Kennedy, was there taking photos and saw the whole thing.

But that didn&#8217;t stop him from getting back on another bull. Just weeks later, he participated in another rodeo.

Getting injured is like a rite of passage for bull riders. Although bull riders today wear Kevlar vests to prevent their torso from getting punctured, most do not wear helmets. Concussions and twisted joints are common.

Snow, a former Army Ranger who served eight years in the Army, is no stranger to rough sports. He used to play on a Navy rugby team and has a broken nose to prove it.

Competing in any rodeos the next six months will be impossible because his battalion is deployed to southern Spain. As a gunner&#8217;s mate for the battalion, he takes care of all of the weapons and trains other Seabees on how to use them.

But when he gets out of the Navy in February, he plans to work as a blacksmith and do the bull riding full time.

If he does well, he figures he can earn a good living.

Professional bull riders can make between $500 for the smaller rodeos to more than $20,000 for the larger ones. The top echelon of bull riders makes more than $100,000 annually, according to the PRCA.

Snow, who is divorced, is looking forward to returning to Texas so he can be closer to his two sons, who are 3 and 5. But he isn&#8217;t sure how long he&#8217;ll be able to ride bulls. Maybe five years. It all depends on how his body holds up.

He approaches the life much like he does a bucking bull: Just hold on and ride it for as long as you can.