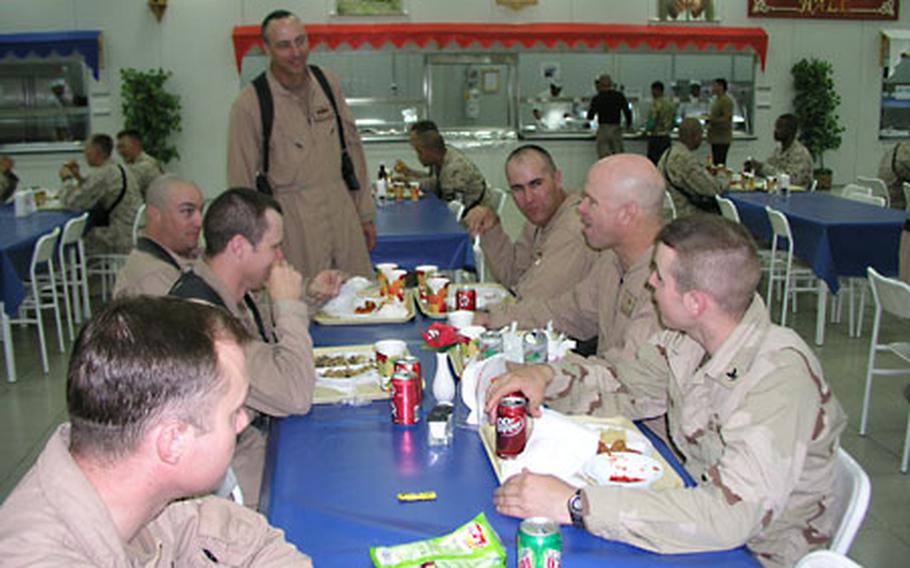 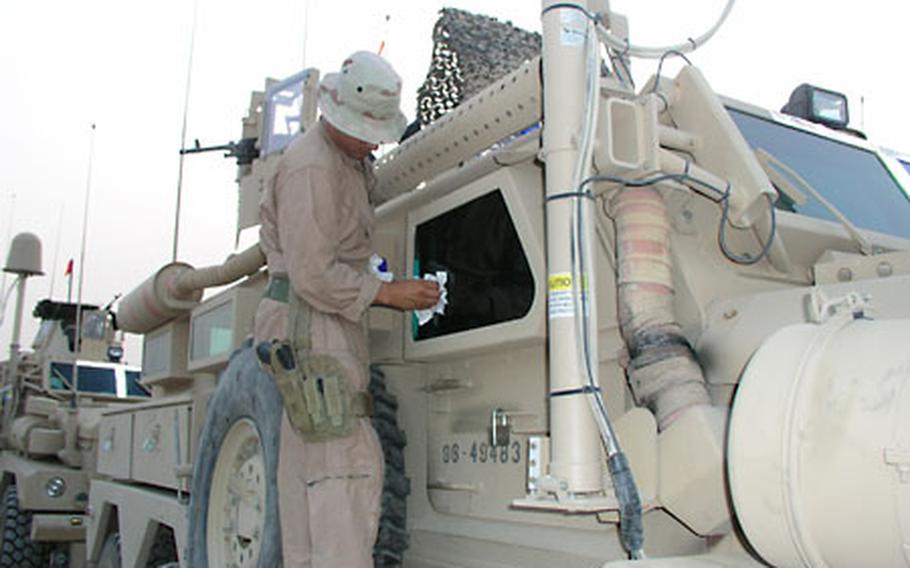 At Al Asad Air Base in Iraq last week, a Navy Seabee cleans the windows of a heavily armored gun truck as his convoy security team gets ready to escort a supply convoy hauling gravel to a road project in Fallujah. (Franklin Fisher / S&S) 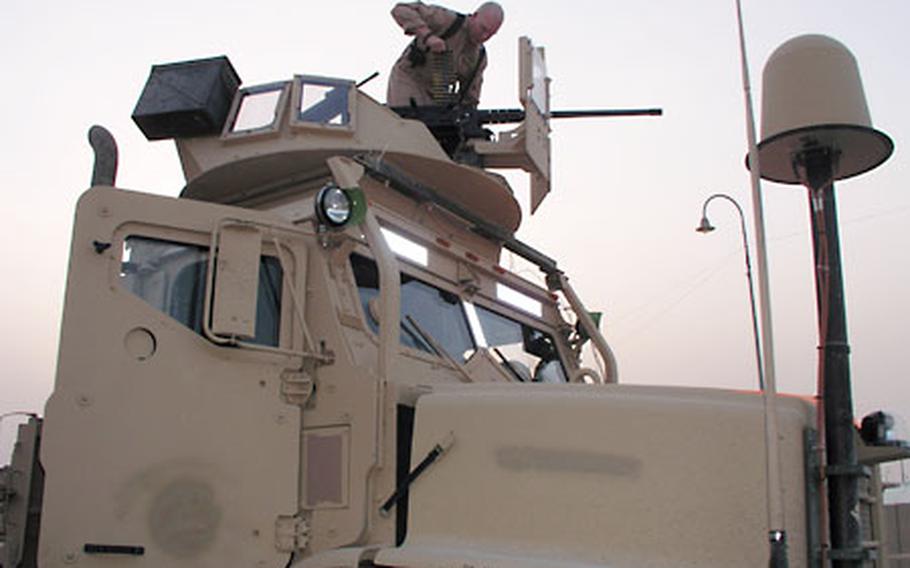 At Al Asad Air Base in Iraq last week, a Navy Seabee readies ammunition on his heavily armored gun truck as his convoy security team gets ready to escort a supply convoy hauling gravel to a road project in Fallujah. (Franklin Fisher / S&S) 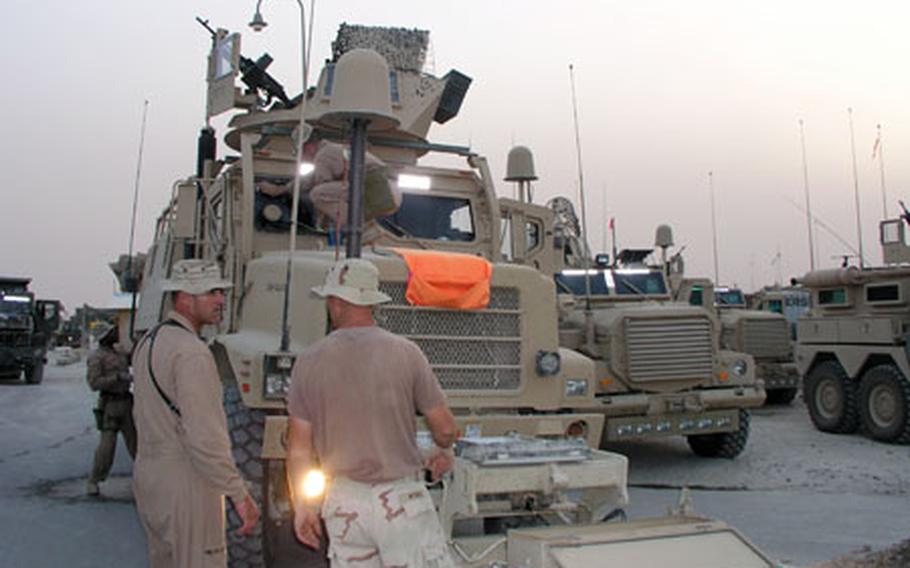 AL ASAD AIR BASE, Iraq &#8212; Tina Williams was OK with her husband serving in the Navy Reserve as a steelworker with the Seabees.

The Seabees are the Navy&#8217;s famous construction battalions that typically support the Marines and build everything from airstrips to base camps and repair it all, too, including roads and bridges.

But then her husband, Petty Officer 2nd Class James Williams, 38, told her he wanted to get into a hazardous new line of work within the Seabees &#8212; convoy security escort teams. To Tina Williams, of Angleton, Texas, that meant big risk from insurgent roadside bombs.

The Seabee convoy security teams&#8217; mission is to protect supply trucks hauling equipment and materials from one Seabee base or work site to another. Most supply convoys in Iraq are escorted by the Army or Marines.

But with the Iraq conflict, the Navy now requires that each Seabee battalion maintain two convoy escort teams. The teams began operating in Iraq in 2004.

&#8220;Just going outside, and the miles we put on, puts us more at risk to hitting IEDs (improvised explosive devices) and being attacked by the enemy,&#8221; said Lucia, 41, of Covington, La. Lucia is convoy commander of Team Dozer. That team and Team Piledriver are the battalion&#8217;s convoy security teams. Williams is with Dozer as a gunner assigned to a vehicle named &#8220;The Deuce.&#8221;

NMCB 28 is out of Barksdale Air Force Base, La., and made up of Navy Reserve Seabees drawn from Arkansas, Louisiana, Mississippi, Texas and Oklahoma. In Iraq, the battalion is headquartered at Al Asad Air Base in western Anbar province.

Each team has its own complement of sturdy, heavily armored gun trucks manned by Seabees who have received special convoy escort training in the United States.

When Williams was invited to join one of the CSE teams about two years ago, he didn&#8217;t say yes right off.

She eventually went along, and Williams says it&#8217;s the Seabee job he likes most and wants to keep. He finds it more challenging and stimulating than construction work.

Team members are taught to use machine guns and other crew-served weapons that the trucks are outfitted with, combat lifesaver first aid and high-tech communications gear. They learn how to operate and maintain the big, up-armored gun trucks and what to do if their convoy comes under attack.

They&#8217;re also trained in how to evacuate the wounded, either by vehicle or aircraft, and to move damaged vehicles away from exposure to enemy attack.

Each team is also assigned its own Navy hospital corpsman.

Both Williams and Lucia were Seabees in the Persian Gulf War, and they said the new convoy security teams reflect a far more deliberate approach to safety.

&#8220;There was no armor on the vehicles at the time,&#8221; Williams said. &#8220;We just hardened the vehicles with sandbags. Our briefings were very short. We knew we had to get from point A to point B and that was it. There was very little guidance.&#8221;

Today, before each mission, the security team holds a thorough briefing that covers the purpose of the mission, the routes, any recent attacks or other hazards and other information.

They also put much effort into getting their trucks ready for the trip: loading ammunition, wiping windows and mirrors clean; checking the condition of their trucks to make sure that engines, tires, communications gear and other equipment are in good working order.

And they&#8217;ll bow their heads while someone prays.

AL ASAD AIR BASE, Iraq &#8212; The U.S. Navy Seabees construction force was formed during World War II and became famous during the war for building everything from airstrips, piers, and supply depots, to staging areas, hospitals and many other facilities.

It was the Seabees who built the airfields on Tinian, the Pacific island from which the B-29 bombers that dropped atomic bombs on Japan in August 1945 took off, for example.

The Seabees were the subject of the 1944 movie &#8220;The Fighting Seabees.&#8221; It starred John Wayne and Susan Hayward, and is cherished to this day by Seabees serving in Iraq who see it as a public acknowledgment of the important role their forces played during the war.

This time, in Iraq, the buzz saws, power drills and hammering are again heard as the Seabees continue their traditional mission of building facilities to support the U.S. Marines and other coalition forces.

In Iraq&#8217;s Anbar province, for example, the Seabees of Naval Mobile Construction Battalion 28 have been carrying out a wide range of construction jobs, big and small.

The battalion is out of Barksdale Air Force Base, in Shreveport, La., and is made up of Navy Reserve Seabees drawn from Arkansas, Louisiana, Mississippi, Texas and Oklahoma. The average age of the battalion&#8217;s Seabees is 38.

In Iraq, the battalion is headquartered at Al Asad Air Base in western Anbar province.

&#8220;Those COPs were all new construction &#8212; bare piece of ground,&#8221; he said. The Seabees put in electric power and built living quarters set inside protective barriers, command centers, base medical stations, gyms, toilet facilities and numerous other structures.

Besides building forward bases, Seabees have made repairs and other fix-ups at run-down buildings that the Marines in Anbar province now use as patrol posts.

Indeed, it was Seabees the from NMCB 28 who drew praise recently from a Marine officer whose patrol base near a bridge over the Euphrates River in Rawah was greatly improved by their visit earlier this year.

&#8220;The Seabees, the reservist Seabees, they just went above and beyond the call," 1st Lt. Daymon (CQ) Doykos said earlier this month.