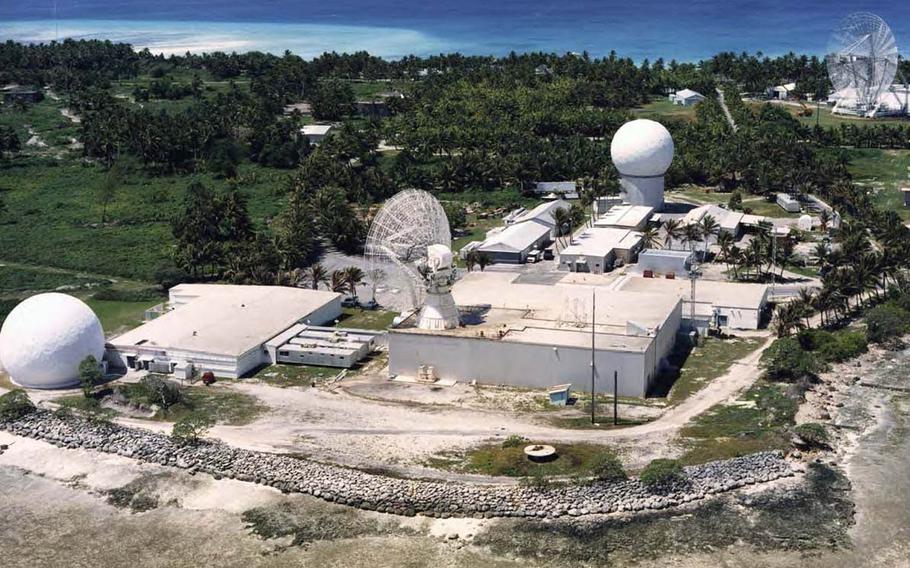 The Ronald Reagan Ballistic Missile Defense Test Site at Kwajalein Atoll, Republic of the Marshall Islands, is among a growing number of U.S. military installations threatened by the effects of climate change, a recent report said. (Courtesy of the U.S. Army)

Rising sea levels caused by climate change will present serious risks to military readiness, operations and strategy as America’s coastal installations become inundated in coming decades, according to a report by a panel of retired military officers.

Among the recommendations made in “Sea Level Rise and the U.S. Military’s Mission,” released this week by The Center for Climate and Security, is a call to integrate climate-impact scenarios into the Department of Defense’s regular planning cycles.

The panel, composed of five retired flag officers representing all the services, is part of the non-partisan security and foreign policy institute based near Washington, D.C.

The report synthesized recent studies conducted by the DOD, Congress and independent researchers and then analyzed what those findings mean for the U.S. military’s future around the world.

“Essentially, the very geostrategic landscape in which the U.S. military operates is going to be different from what it is today,” the study said.

“To use military parlance, the theater is, in essence, flooding. Adjusting to that rapidly changing theater will be absolutely critical for the U.S. military to maintain its ability to fulfill its mission, and for the United States to adequately pursue its national security interests.”

Recent research has found that low-lying and exposed areas that contain coastal U.S. bases will be significantly affected, but by widely varying degrees.

As early as 2050, some low-lying bases along the U.S. East and Gulf coasts could be submerged 10 percent to 25 percent of the year.

A 2014 U.S. Army Corps of Engineers report suggested that planners should assume a global sea-level rise of almost 5 feet by 2100, but that a 6.6-foot rise “is a credible upper bound.”

Sea-level rise could affect military readiness by swamping coastal installations that are crucial for support and logistical operations. Operations could be affected by reducing the area of usable land on installations for training and testing.

U.S. military strategy will have to deal with increased instability in overseas regions affected by rising seas and increasing frequency and intensity of severe weather, the report said. These changes will exacerbate regional conflicts and require more humanitarian assistance missions by the U.S. military.

The report highlighted Hampton Roads in Virginia, which former Secretary of Defense Leon Panetta described as “the greatest concentration of military might in the world.” The area, which is low lying and vulnerable to sea-level rise and storm surge, is home to Allied Command Transformation, Joint Forces Command, Fleet Forces Command, Air Combat Command, Marine Corps Forces Command and U.S. Army Training and Doctrine Command.

The panel called on policymakers to bolster DOD’s capacity to comprehensively address strategic climate-change risks. The DOD and Coast Guard should include current and projected climate impact analyses into regular maintenance and upgrade planning for installations, it recommended.

Also, climate-related decisions should be made only in light of the highest-risk projections, the study said.

“Put simply, the world is already seeing effects that are worse than projections of past decades indicated they would be — and they are occurring much earlier than the timescales predicted in the past,” it said.

To fully imagine the most catastrophic scenarios possible, the government should begin creating models of impacts at a few critical bases and their surrounding communities, the panel recommended. The models should begin with installations that are home to functions that are unique or not widespread, such as those that refuel or repair nuclear-powered naval craft.

The panel reiterated the conclusion of a DOD report earlier this year that called for improved climate data quality and consistency.

“Throughout the process of producing this study, it became increasingly clear that the lack of trend data on sea level rise and storm surge implications regarding loss of training days, damage to equipment and infrastructure, repair and maintenance costs, and risks to support communities that are critical to base operations, is hindering proactive decision-making,” the report said. “This is the case for defense sites at home and abroad.”