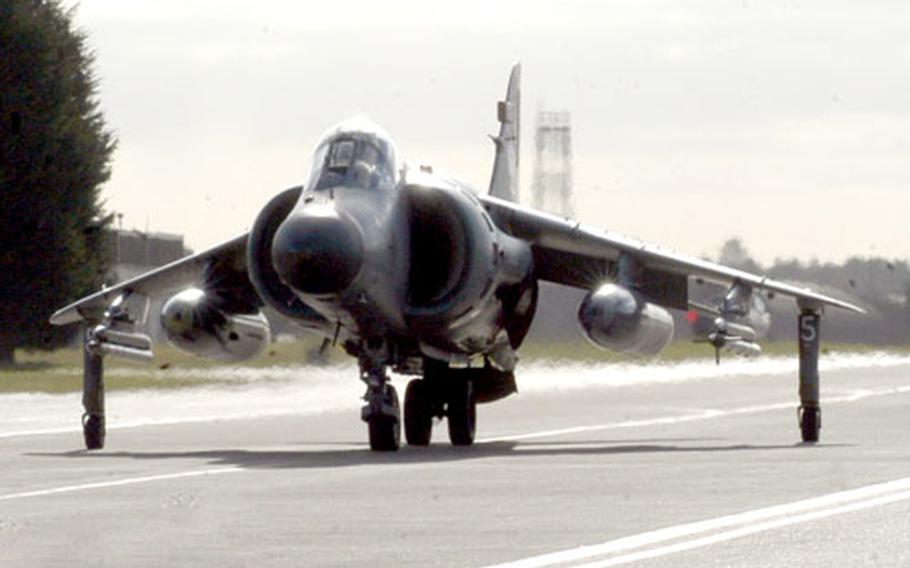 A Royal Navy FA2 Sea Harrier jet taxis to the runway at RAF Lakenheath, England, on Thursday before conducting a training exercise with F-15C Eagles from the 48th Fighter Wing. (Sean Kimmons / S&S)

RAF LAKENHEATH, England &#8212; It wasn&#8217;t the first time Royal Navy FA2 Sea Harrier and 48th Fighter Wing F-15C Eagle jets collaborated in the sky to rehearse combat scenarios, but it will be the last when a two-week training exercise ends Friday.

Next month, the 801st Air Squadron &#8212; the last Sea Harrier detachment left in the Royal Navy &#8212; will decommission its beloved aircraft, which earned its fame from the Falklands War.

According to the Web site www.naval-technology.com, the United Kingdom Ministry of Defence said the Sea Harrier&#8217;s departure is part of transforming the Royal Air Force and Navy&#8217;s Joint Force Harrier, which will, by 2007, fly the RAF GR9 Harrier aircraft.

The recent training above the North Sea area not only gave Sea Harrier pilots the opportunity to get behind the stick one more time but also gave Eagle pilots from 48th Fighter Wing&#8217;s 493rd Fighter Squadron a chance to try their air combat skills against a different type of aircraft.

&#8220;One of the best benefits we get from it is just the fact that they are a different aircraft and how our aircraft reacts to that, instead of going against the same jets all the time,&#8221; said Capt. Kurt Duffy, a F-15C pilot with the 493rd Fighter Squadron.

Duffy, who has worked with the Sea Harrier pilots before, added that it&#8217;s always a benefit to train closely with them in case hostility does arise.

Even though his aircraft is on its way out, Royal Navy Lt. Kieron Steen still appreciated the chance to test his skills against the Reapers of the 493rd Squadron.

Many of the Sea Harrier pilots will move on to pilot GR9 Harriers, which provide a better close air support capability, Steen said.