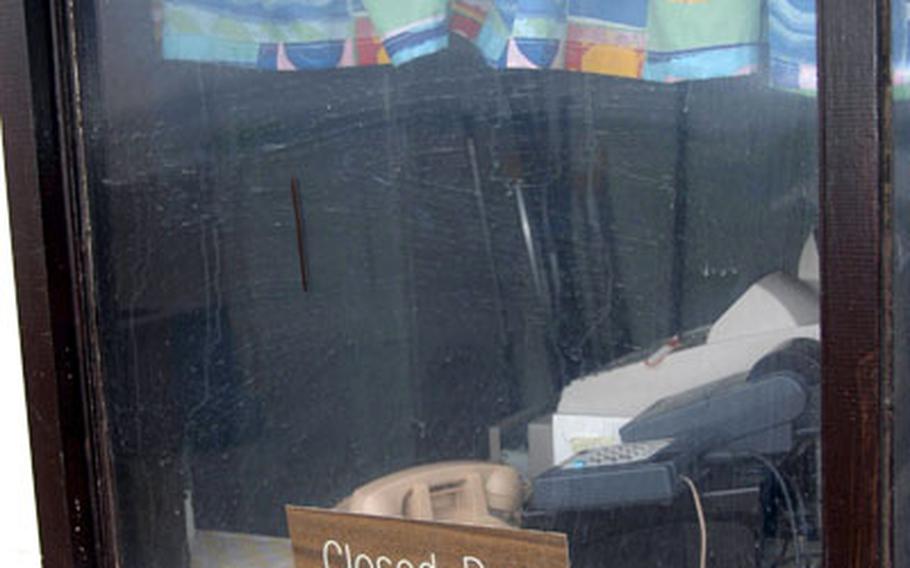 A sign in the office window at the base beach where people can rent boats says it all: Sea fog rolling in from the Pacific Ocean has shut down some outdoor activities, grounded sorties and prompted base residents to fire up space heaters at Misawa Air Base, Japan. (By Jennifer H. Svan / S&S)

MISAWA AIR BASE, Japan &#8212; The calendar says it&#8217;s summer, but the only T-shirts and shorts worn outdoors in Misawa are layered under fleece.

Since about June 2, the weather at this northern Japan base has been a Seattle-like blend of thick morning fog, overcast skies and chilly temperatures.

In base housing, where the heat has long since been turned off, residents are resorting to blankets and portable heaters to stay warm.

Blame it on sea fog.

The Japanese call it oyashio &#8212; an ocean current that pulls in cold water from the northern Pacific.

&#8220;The interaction between the cold water and the [warmer] air temperature creates fog along the coast,&#8221; said Capt. Brooke Matwick, 35th Operations Support Squadron weather flight commander. &#8220;There&#8217;s days where you just have fog right off the coast and it&#8217;s clear-and-a-million right in Misawa. But once the sea breeze starts to kick in and the winds shift to the east, that&#8217;s when the sea fog can roll in as well.&#8221;

The weather phenomenon keeps the mercury a cool 61 degrees in June, on average, but it&#8217;s been even chillier over the past week and a half, with daytime temperatures in the 50s.

Monday was the coolest day of the month so far with a high of 52, Matwick said. The nighttime low for the month was 44 degrees on June 3. Misawa&#8217;s record low for June was 37 degrees in 1985, according to climatology records.

The foggier June is, the quieter the skies. Safe F-16 flight operations require, in general, at least a 500-foot cloud ceiling and about 1.5 miles visibility, according to base officials.

On Tuesday, the base sortie board, which posts the number of training flights flown each month by the 13th and 14th fighter squadrons, read:

Base officials said the board is updated almost daily.

The weather also has affected outdoor activities. The base beach is open, for example, but the boats are idle.

When the sea fog rolls in boat rentals are prohibited for safety reasons, said Dave Hymer, Outdoor Recreation director. He believes the weather also has discouraged people from signing up for hiking and biking trips.

While the sea fog can extend up to 3,000 feet or more, there may be sunshine at higher elevations, Matwick said.

How long the fog will persist is anyone&#8217;s guess.