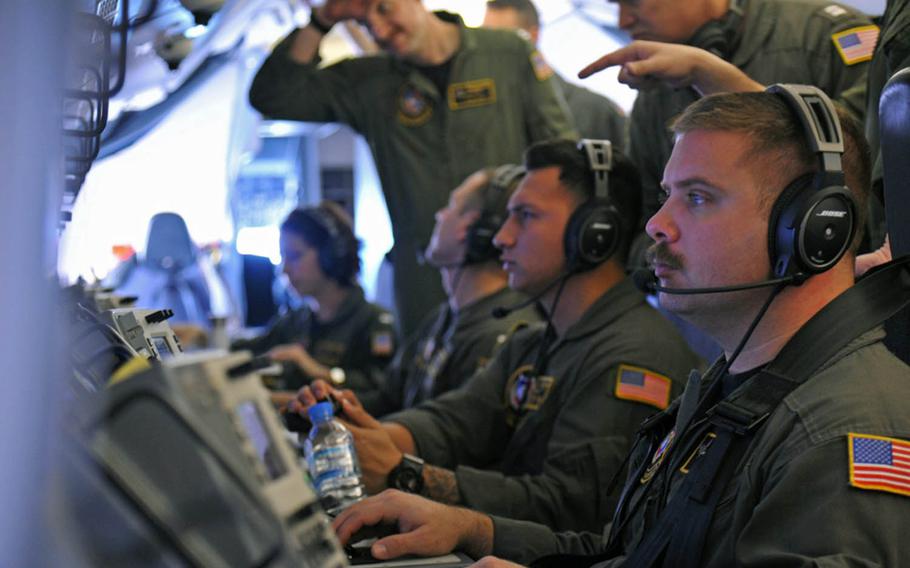 Aircrewman 1st Class Mike Burnett, right, and crewmembers of Patrol Squadron 47 on a flight over the East China Sea on Jan. 7, 2019. The squadron is taking part over the next 10 days in Exercise Sea Dragon from Guam. (Kevin A. Flinn/U.S. Navy)

Units from the U.S. Navy and the Royal Australian Air Force gathered in Guam to begin honing anti-submarine warfare skills in a multi-national exercise.

Navy Patrol Squadrons 47 and 16 and Submarine Squadron 15 are taking part in the 11-day exercise, according to a Navy statement issued Sunday.

Both U.S. and Australian units will put sub-hunting P-8A Poseidon aircraft to work tracking live and simulated targets during the exercise.

“Being a multi-national exercise, our goal is to work closely with our Pacific allies and to continue to foster relationships in the region,” said Lt. Cmdr. Korhan Orgun, the VP-47 officer-in-charge during the exercise in the Navy statement. “We’ll do this through (anti-submarine warfare) events and learning to work together more efficiently.”

Exercise Sea Dragon demonstrates the U.S. and its Pacific allies’ commitment to a free and open Indo-Pacific, according to the statement.