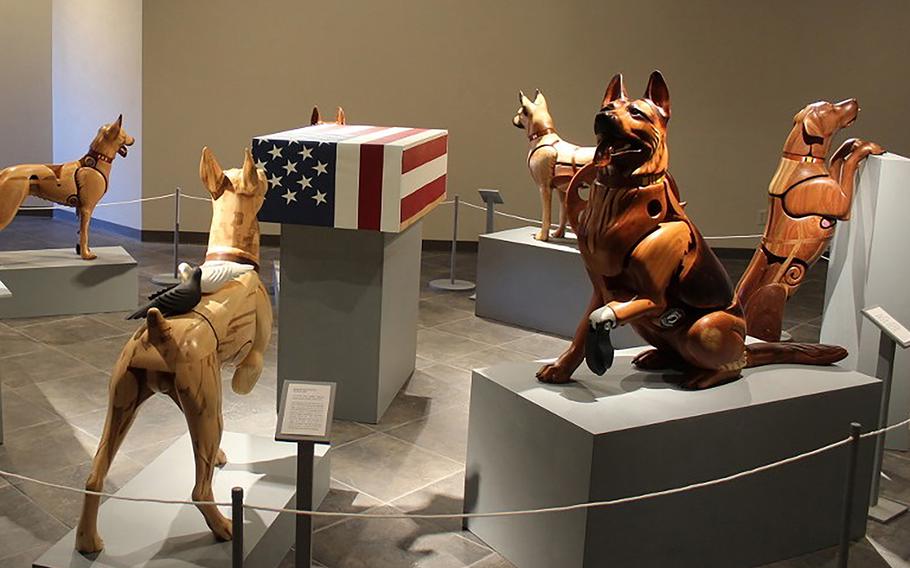 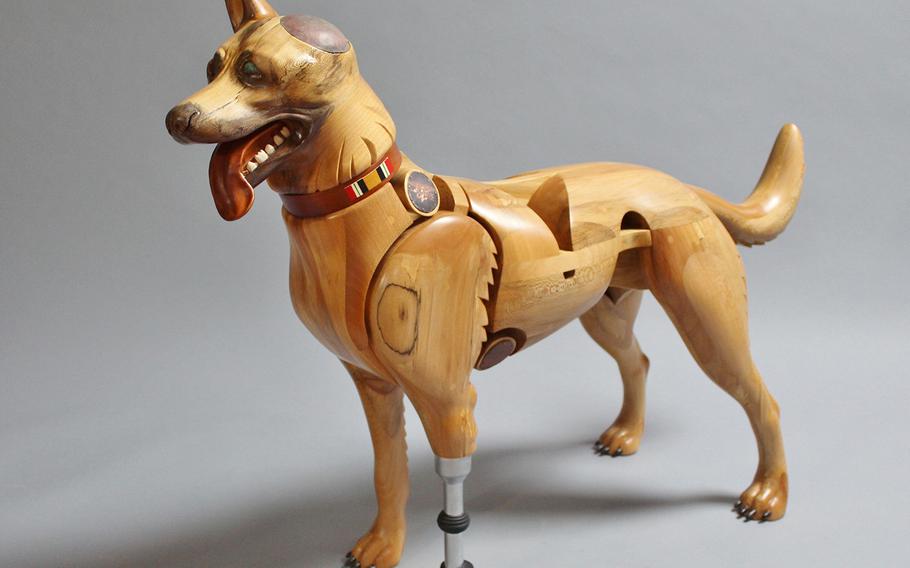 Laminated and carved sycamore and cherry, copper, nickel plate, and oil paint. This Belgian Malinois with the Navy Seal trident is a reminder of our wounded veterans who returned home from Iraq, many with injuries. The all-too-common injuries represented here include a traumatic brain injury and the loss of a limb and an eye from an improvised explosive device. (Sculptures by artist James Melli) Laminated and carved sycamore and cherry, copper, and oil paint. This Malinois wears the service ribbon from Afghanistan and is a double amputee aided by a sling wheelchair. The wheels are free-turning, more like those designed for wheelchairs for humans. Note the Purple Heart. (Sculptures by artist James Melli) Lucca K458 and Cooper K154, 2018 Lucca K458 is laminated and carved basswood that has been bleached, stained, and burned for coloring. Tongue is carved cherry and teeth are maple. The medallion replica of the Dickin Medal is 3D-printed. Cooper K154 is laminated and carved basswood. Dove and football are carved and painted basswood. Lucca and Cooper were on assignment together in 2007 in Iraq. Between patrols, Lucca and Cooper snoozed together in shady patches or cavorted with a deflated football. (Sculptures by artist James Melli) 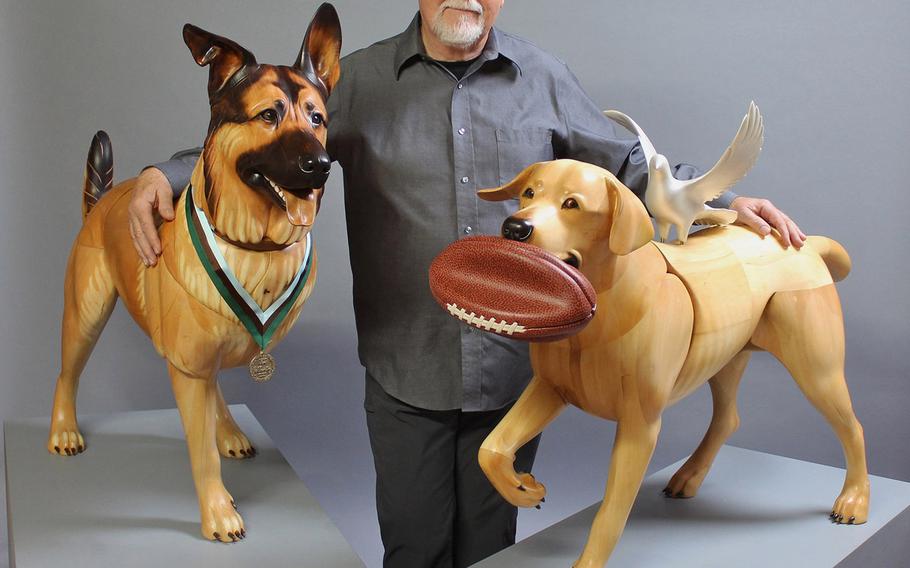 A traveling exhibit of sculptures depicting wounded military working dogs seeks to get people talking about the servicemembers who worked, and sometimes died, with the canines, while also honoring the dogs’ service.

“This exhibit shows the sacrifices dogs have made in battle, but it also shows the human sacrifice of their handlers,” Ohio-based sculptor James Mellick said in a phone interview last week.

The sculptures are scheduled to begin a two-month run from Nov. 8 to Jan. 21 at the National Museum of the U.S. Air Force on Wright-Patterson Air Force Base, Ohio.

There are now eight dogs carved out of cedar, walnut, poplar, sycamore and other woods in Mellick’s collection, his website says. Through the dogs, the exhibit takes viewers from World War II up to the ongoing war in Afghanistan.

Among the stories Mellick tells in his sculptures is that of Lucca K458, a Marine Corps service dog trained to detect explosives.

Lucca completed more than 400 missions during her six-year career, but in 2012, on patrol in Afghanistan, she barely survived a bomb blast.

Lucca, who lost one of her legs in the explosion, was sculpted out of laminated basswood that has been bleached, stained and burned for coloring. Her tongue is carved cherry and her teeth are maple. She wears a medal awarded in 2016 for conspicuous gallantry by the People’s Dispensary for Sick Animals, a British group.

“The dogs’ wounds are an allegory for all the human suffering that’s harder to talk about,” Mellick said.

Another sculpture depicts Cooper K154, who was killed with her handler, Cpl. Kory Wiens, in July 2007 by a bomb hidden in a haystack in Iraq. Cooper and Wiens’ ashes are buried together in Wiens’ Oregon hometown, and a dog park has been named after the two at Fort Carson, Colo.

Cooper has a carved dove on her back and a football in her mouth. The dove signifies that she has “earned her angel wings” and the football represents the playfulness she showed during her lifetime, Mellick’s website says.

The exhibit has been touring museums and events around the U.S. since 2015, when Mellick took three of his wooden sculptures to the Ohio State Fair and the Vietnam Dog Handlers Association reunion in Nashville, Tenn.

“People can relate to dogs in a way that’s hard for most people to relate to soldiers,” he said. “I just want to bring awareness to the real wounds that our soldiers, airmen, Marines and sailors suffer from.”