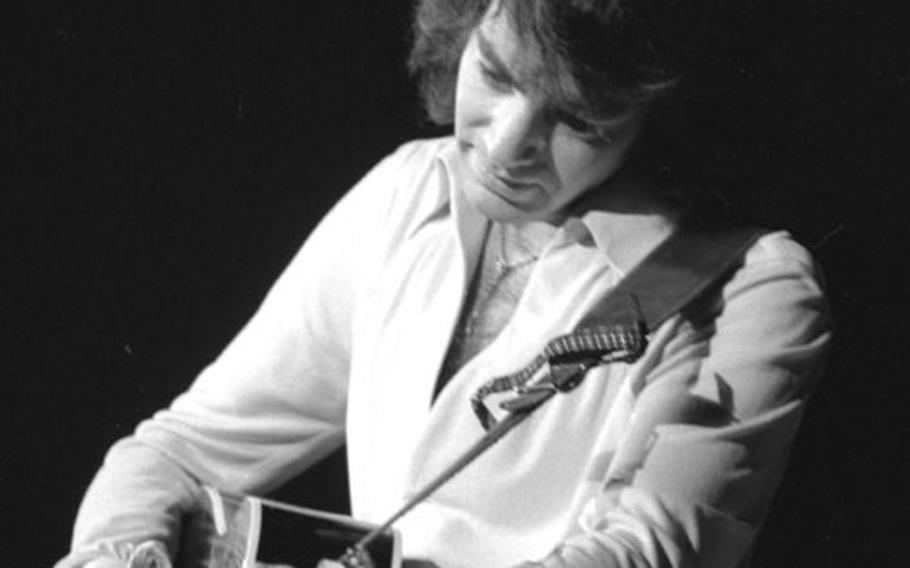 Neil Diamond, onstage at the Jahrhunderthalle in Frankfurt in June, 1971. (Jim Cole / ©S&S)

Singer-composer Neil Diamond is currently on his first European tour and showing audiences why he sold more single records than any other male singer in the U.S. last year.

Audience reaction to his performance in Frankfurt last week, one of the five German stops on the 28-day tour, underscored this popularity. His older hits such as "Sweet Caroline," "Solitary Man," and "Holly Holy," met with the same loud and long applause as his newer releases, "Cracklin' Rosie," and "I am, I said."

From the beginning right up to his close with the rousing spiritual-like ''Brother Love's Traveling Salvation Show,'' Diamond and company sounded better in concert than on record.

Although most of the material was of his own composition, Diamond's rich vocal styling of Joni Mitchell's "Both Sides Now," and one of his recent hits successes, "He Ain't Heavy," written by the late Bob Russell, brought some of the loudest applause of the evening.

His current release, "I am, I said," had its start when the 26-year-old native of Brooklyn, N.Y., screen-tested for the lead role in the just released ''Lenny," the story of comedian Lenny Bruce.

"My first scene was a love scene at 7 a.m.," he recalled for his capacity audience at the Jahrhunderthalle. "The girl and I both tried, but with 40 technicians around and the director moving you into the positions he wants which aren't necessarily the ones you want, it didn't work out too well.

"After a couple of other scenes, all I wanted to do was get the test over with because I was so depressed. I went back to my dressing room and picked up my guitar. I wanted to write a song about loneliness, being afraid, and being lost."

The result is well on its way to the million sales mark.

Diamond commented on his songwriting.

"I'm constantly amazed that I'm able to write a song &mdash; to take a piece of paper and, at the end of the day, or two days, or a week, have a song on it. A lyric that makes sense and a melody I enjoy."

Unlike many singers who go on tour with a makeshift band behind them, Diamond is backed by an experienced and talented group of musicians.

Others in the group include Richard Bennett on lead guitar, Alan Lindgren on organ and piano, and Jefferson Kewley, percussionist.