Scouts unit is getting a jump on the enemy 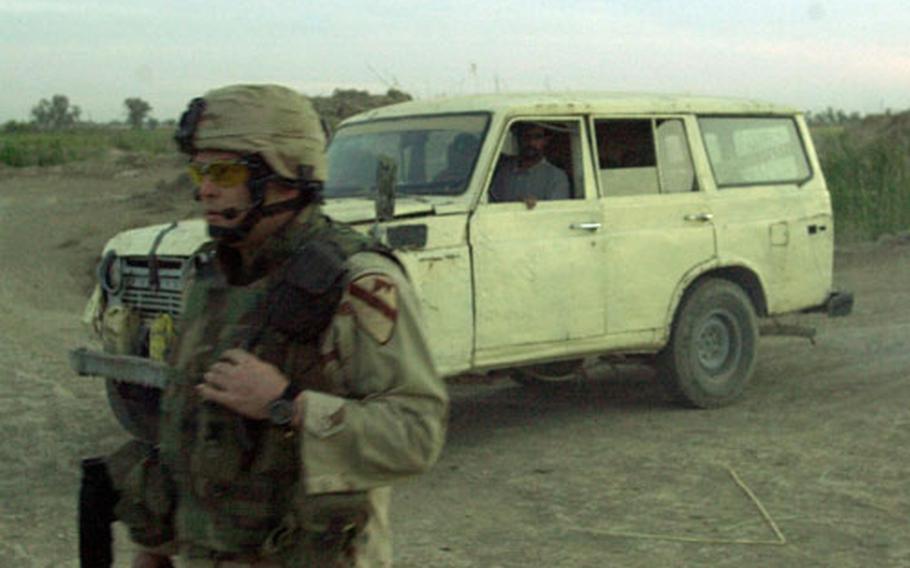 As the sun sets, Sgt. Sam White&#39;s day is just beginning. White says he loves the freedom of being a scout, who work in small teams with a great level of independence. (Terry Boyd / S&S)

As the sun sets, Sgt. Sam White&#39;s day is just beginning. White says he loves the freedom of being a scout, who work in small teams with a great level of independence. (Terry Boyd / S&S) 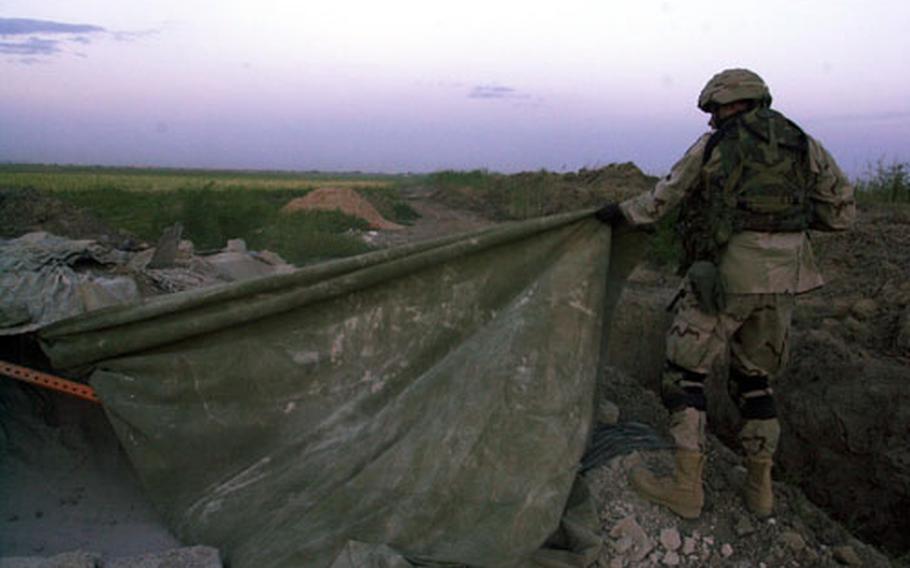 Sgt. Billy Burrus checks under a tarp near the road where his scout mission was passing. Burrus and his platoon sergeant, Sgt. 1st Class Jeff Campbell, suspected weapons, but found only cement. (Terry Boyd / S&S) 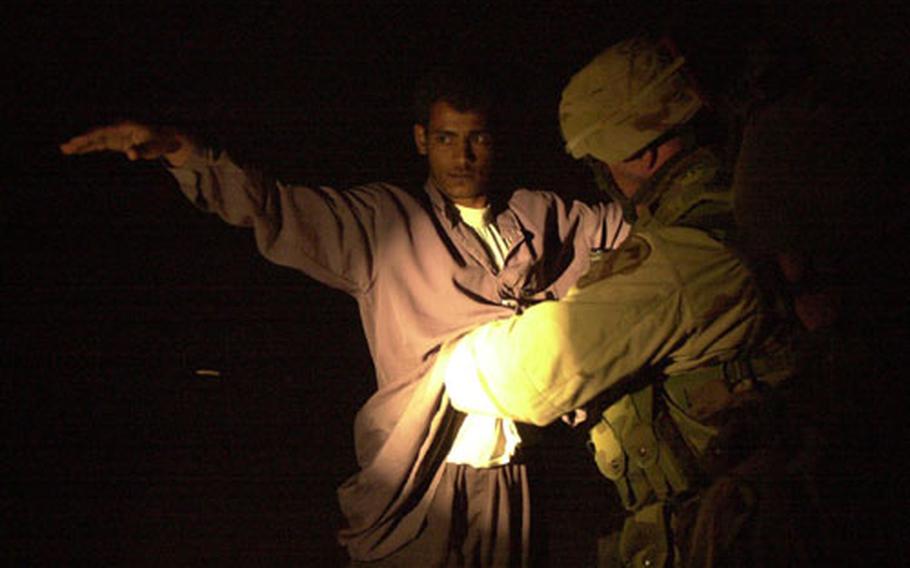 CAMP BLACKJACK, Iraq &#8212; Spc. Owen Starlin tries to drum up some action as he enters the chow hall Sunday night for a pre-mission meal.

His gut tells him the scout unit is due because it&#8217;s been days since the last shootout, he says.

Starlin gets no takers.

Starlin, Burrus and company spent Sunday night and early Monday morning monitoring the edge of a town their commanders expect to be the next major flash point as the 2-week-old outbreak of violence continues.

The town &#8212; which is not being identified for security reasons &#8212; is so hot that the tiny scout teams are forbidden from entering.

About 10 p.m., a tip comes in that about 100 men, some with weapons, are collecting near the city center. For a few minutes, it looks like Starlin will win his solo bet, and the patrol prepares to move out of the shadows and onto a main road to block escape routes.

The tension dissolves when helicopters can&#8217;t locate the group. But from invisible locations, scouts use the latest ambient-light-enhancing ranging devices to watch for bomb planters, weapons runners and ambushers.

The Fort Hood, Texas-based 1st Cav is no longer literally a cavalry, with Kevlar-clad soldiers in armored Humvees long ago replacing horse-mounted, saber toting cavalrymen. But the mission of Troop D&#8217;s scouts in Iraq is essentially the same as their circa 1870 predecessors.

Scouts work clandestinely to find the enemy and take his measure before the main force fights him, or disrupt him before he can strike.

To put it another way, the 19 Delta military occupational specialty &#8220;most closely relates to 9-year-olds playing war, and those expectations,&#8221; said 1st Lt. Blayne Smith, 2nd Platoon leader. &#8220;You find them before they find you.

Unencumbered by the heft and bureaucracy of conventional forces, scouts are &#8212; as much as any soldiers &#8212; masters of their domain. With that independence comes elevated responsibility and risk in an unforgiving environment.

Scouts can only really count on themselves, because working alone in brush and back streets, there is no one to rescue them if they get in trouble, says Sgt. 1st Class Jeff Campbell, platoon sergeant and career scout.

Finally, they have to be able to fight. In just a few weeks in Iraq, Troop D scouts have had five major firefights, killing or capturing more than 30 insurgents, with one scout suffering minor wounds.

This sort of work seems irresistible to a particular personality type who thinks a day without gunfire is a day without sunshine. Those who would go crazy on the Tactical Operations Center staff. Those who have a funny definition of fun.

&#8220;Let&#8217;s have some fun!&#8221; yells Casmus at the start of a recent mission designed to entice insurgents into attacking the scouts from what intel suggests may be newly dug fighting positions.

Asked how he would describe scouting, truck commander Sgt. Sam White smiles and says, &#8220;Fun.&#8221; He says he loves the freedom of working in small groups, matching wits with the enemy.

Troop D, open and unpretentious, may not have the polish and swagger of Special Forces types, whom they resemble in culture and autonomy. &#8220;I&#8217;m gonna warn you. We fight and cuss,&#8221; White says before a mission.

They have their own quirky humor and play fast-recall word games to pass long hours waiting.

And they are aggressive. So aggressive that Smith can sense tension building after a string of nights when insurgents refuse to attack the small, seemingly vulnerable scout teams.

After another fruitless search of shocked Iraqis who never saw the scouts coming, the platoon leader walks back to the Humvee talking to himself.