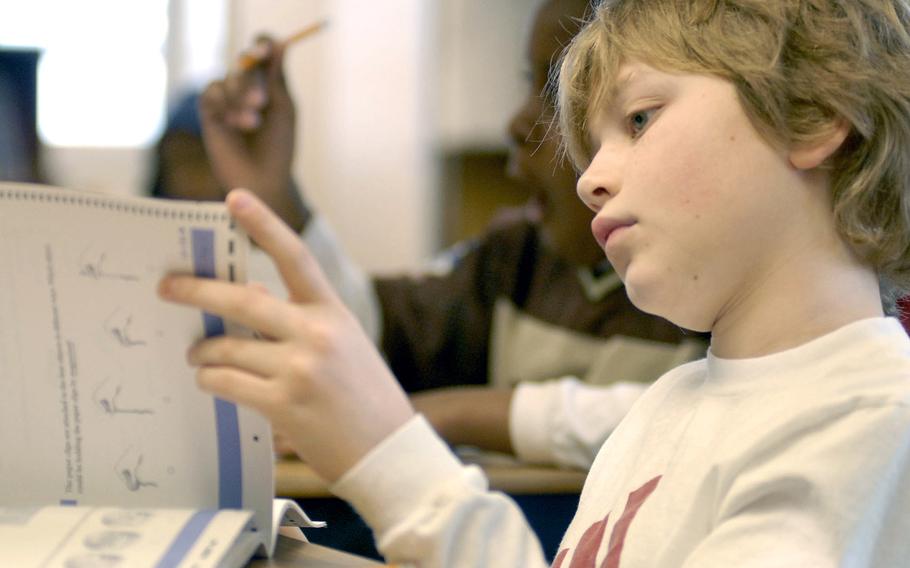 Buy Photo
A fifth-grader at Landstuhl Elementary and Middle School, Germany, looks through his TerraNova test. Scoring discrepancies in the spring standardized assessment have delayed the release of results for some 33,000 DODEA students. (Stars and Stripes)

KAISERSLAUTERN, Germany — The release of standardized test results used to measure student progress has been delayed by months for some 33,000 students at Defense Department schools because of problems reported by the testing company, school officials said this week.

The delay has affected scores of nonmilitary school districts across the United States in addition to all Department of Defense Education Activity schools worldwide, according to news reports.

The test, known as the TerraNova, is one of several systemwide assessments DODEA uses to evaluate students’ academic skills and program effectiveness in core subjects such as reading and language arts, math, science and social studies. Schools and parents can use the results to see how students compare to their stateside peers.

The problems in scoring the assessment, given to DODEA students in grades 3 to 8 last spring, arose after the testing agency was purchased by a new company.

Discrepancies due to a labeling issue were found in the test scores of 78 students across all DODEA regions, Griffin said.

“We understand that this unanticipated delay in the release of reports may have caused some concern for parents and schools,” Griffin said in a statement. “We sincerely regret this situation and we are working diligently with the vendor to get a resolution as soon as possible.”

DODEA has the results and will release them after a final review and approval by the assessment agency and a DODEA research team, Griffin said. The release is tentatively scheduled for Oct. 31.