Scope of Navy's LCS program uncertain, despite no clear replacement 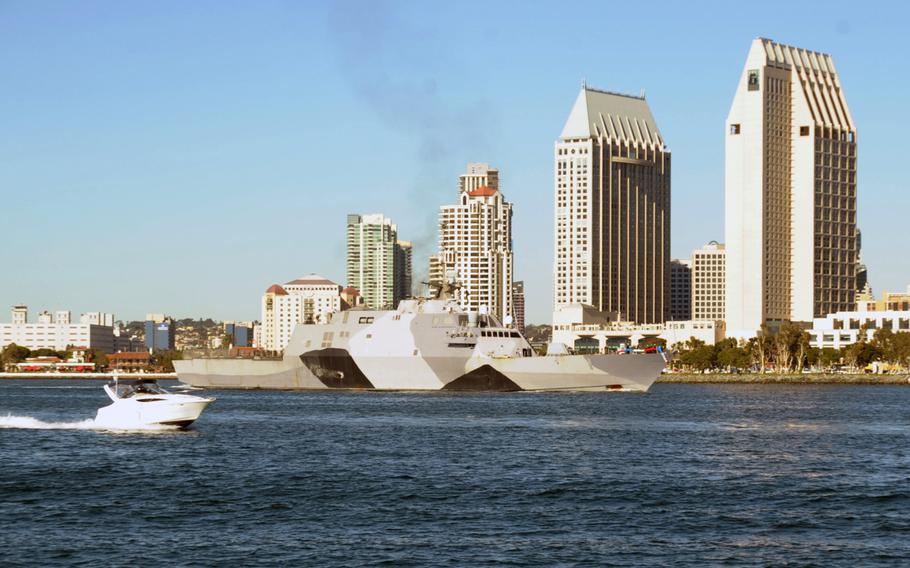 The littoral combat ship USS Freedom returns to its homeport of San Diego following completion of its maiden deployment to Southeast Asia in December. Some within the Pentagon are calling for the Navy's order of the ship to be dramatically reduced, raising questions about what the future surface fleet will look like. (Donnie W. Ryan/U.S. Navy)

The littoral combat ship USS Freedom returns to its homeport of San Diego following completion of its maiden deployment to Southeast Asia in December. Some within the Pentagon are calling for the Navy's order of the ship to be dramatically reduced, raising questions about what the future surface fleet will look like. (Donnie W. Ryan/U.S. Navy) 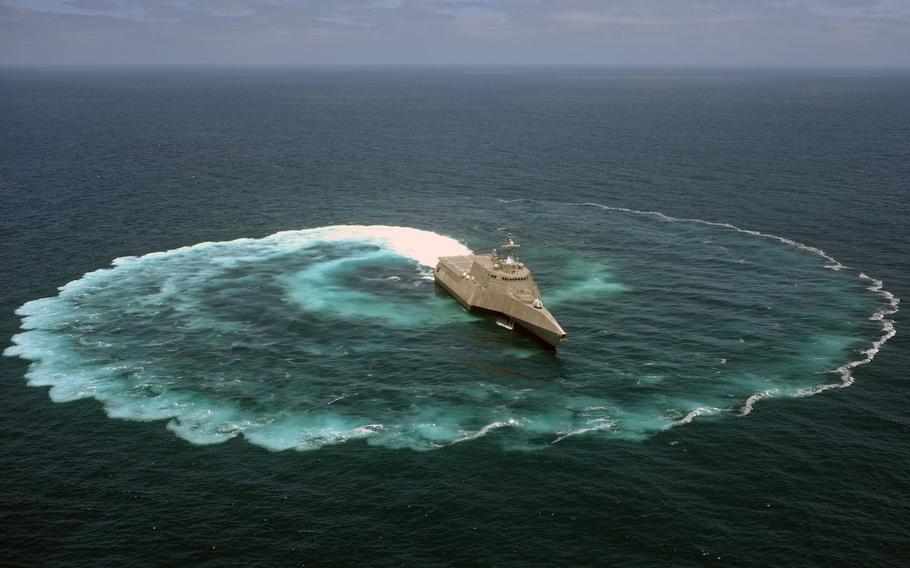 The littoral combat ship USS Independence demonstrates its maneuvering capabilities in the Pacific Ocean off the coast of San Diego in July. Some within the Pentagon are calling for the Navy's order of the ship to be dramatically reduced, raising questions about what the future surface fleet will look like. (Daniel M. Young/U.S. Navy)

The lighter, faster surface fleet of the future may get heavier than Navy leaders have planned, as high-ranking skeptics at the Pentagon try to convince lawmakers that the service is relying too much on a new coastal warfare ship.

At the beginning of the year, the Navy was headed toward three decades of more speed in coastal areas and less slug-it-out strength on the high seas. By 2026, about one in six active-duty vessels would be a littoral combat ship, a light hull that can move upward of 50 mph, but one that carries less armament in comparison with some of the ships it would replace.

INTERACTIVE TIMELINE | LCS development follows tumultuous path However, a disagreement within the Pentagon has made the scope of the LCS program uncertain, despite there being no clear replacement for a big chunk of the future fleet.

Subsequent media reports have since cited a potential number as low as 26 ships, though no final decisions have been made.

Fox then warned against building too many “niche ships” during a speech in February. She didn’t single out the LCS by name, but the reference was clear to the Navy officers and analysts attending the U.S. Naval Institute’s West 2014 conference.

“We need more ships with the protection and firepower to survive against a more advanced military adversary,” she said.

Fox’s comments reignited a debate between supporters of the ship (including Secretary of the Navy Ray Mabus) and its detractors, who point to its lack of survivability in combat and its unproven track record at sea.

When the Navy first planned to build more than 50 LCSs in the 2000s, the fleet had a long-term goal of maintaining 313 to 375 active ships a year. As the economy worsened and defense budgets stopped growing, that goal was reduced to 306 ships. The Congressional Research Service projected on Feb. 10 that the Navy was unlikely to meet even that goal for much of the next 30 years. Currently, the Navy has 283 ships, including submarines.

Despite the downward trend in overall ship numbers, the 52-ship LCS plan has changed little.

“I think the U.S. Navy is starting to say, ‘Wait a second, we really face a war-fighting gap if the shipbuilding plan continues as it is,’” said Eric Wertheim, defense consultant and editor of the U.S. Naval Institute reference guide Combat Fleets of the World. “If there aren’t going to be enough ships in the future, perhaps its best to make every ship count, to be able to fight in harm’s way.”

Three LCSs are active, with an additional one nearly so; 20 are under construction or on order.

During most of the next 30 years, under current projections, the Navy will “experience shortfalls at various points in cruisers-destroyers, attack submarines, and amphibious ships,” according to a Congressional Research Service report in November.

Meanwhile, Navy officials say their requests for ships from combatant commanders and foreign allies aren’t falling, especially in the Asia-Pacific region, where China’s territorial claims have alarmed several of its smaller neighbors. Ship deployments that once ran six months are increasingly dragging out to eight or nine months.

If the Navy changes its current plan, it faces three broad options: Modify one or both of the current LCS variants; design something completely new; or cut back on the number of global missions.

Modifying the LCS with systems more commonly associated with a frigate – lighter than a destroyer, but heavier than an LCS -- would be least disruptive to the overall budget and shipbuilding budget, Wertheim said.

“You really need presence in the world oceans and waterways,” he said. “You need to be able to show the flag and have a viable warship, if push comes to shove and a fight is there. A surface combat frigate replacement is what European allies have done.”

A beefed-up LCS with an Aegis combat system, resembling a frigate, was pitched to Saudi Arabia and Israel at one time, Wertheim noted.

The LCS has been sold by proponents as a replacement for the fleet’s aging frigates, along with its mine-countermeasure vessels and coastal patrol ships.

It accomplishes these tasks with modules built for various missions, including minehunting, anti-submarine, amphibious and surface warfare. However, it can’t switch between these modules without going back to the dock for a refit, which is fine for a planned mission but may be impossible in a wartime situation.

LCS is built to a survivability standard higher than the coastal and minehunting ships, but lower than frigates. That standard garnered attention in January 2013, when a Pentagon report stated that the ship could not continue its mission “after taking a significant hit in a hostile combat environment.”

“We believe that they should be built to operate and, if damaged in combat, to survive and then to withdraw, if you will,” Greenert said.

That standard of survivability provoked criticism from Pentagon officials and lawmakers like Sen. John McCain, and from some of the sailors who could be called to fight on the ships.

Analysts agree that the ship could be modified with Aegis systems, vertical launch missiles and other defenses. Those modifications would also sacrifice speed and add weight. But LCS skeptics would prefer a ship with more muscle that can cruise at 35 mph over a lighter ship able to approach 50 mph.

The Navy could design something from scratch to replace the LCS. It’s unclear how soon that could happen, though service officials say they are looking at developing an escort ship – a typical frigate mission – over the long term.

A new ship program beginning from the planning phase could take a decade or more to get to the kinks worked out. And new programs are also prone to going over budget, with no better example than the LCS itself. The first of its class cost $440 million, twice as much as projected, prompting Mabus to label the early program “a mess” during congressional testimony last year.

Some analysts argue that the Navy would do just as good a job of protecting national security with fewer ships.

Navy leaders like having more ships, but they are very wary of having more than they can properly man and maintain, said Benjamin Friedman, a defense analyst at Cato Institute, a non-partisan, libertarian think tank.

“Congress is more eager to drive up ship numbers for reasons of parochialism and local economies,” Friedman said.

The LCS cut might be related to budgeting concerns on the Navy’s next-generation nuclear ballistic missile submarine, Friedman said. The Navy hasn’t budgeted for a replacement of the aging leg of the nuclear triad, and a supplemental budget request may not be approved, he said.

The number of ships isn’t as important as what the ships can do, and who the enemy is, Friedman said.

Fewer ships might even benefit the Navy if it forces the service to examine spending money on missions that aren’t urgent national security priorities, he argued.

“They do a lot of patrolling the globe and doing mil-to-mil relationship building with other navies,” Friedman said. “That’s not completely useless, but it’s hardly a great use of taxpayer resources.”