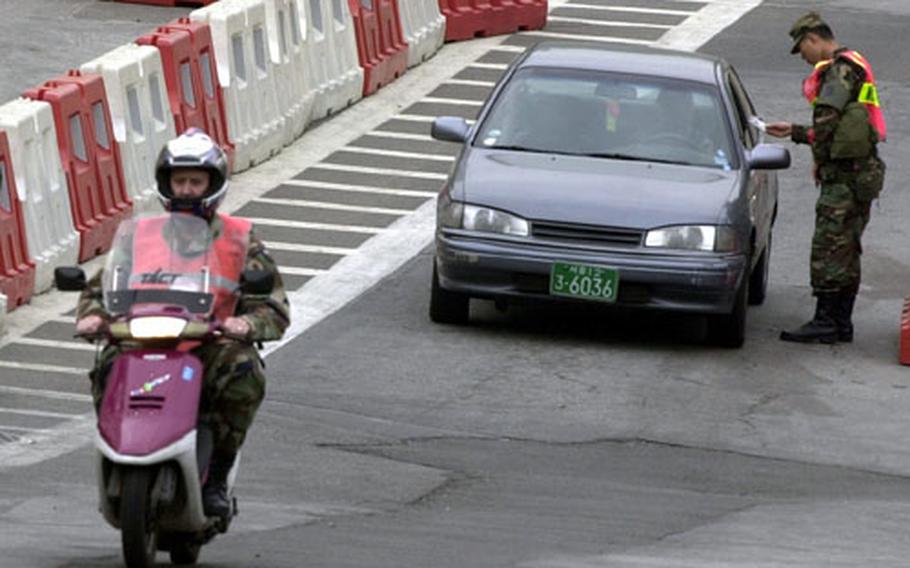 A soldier drives a scooter onto Yongsan Garrison, South Korea. Base officials have tightened rules on such vehicles in an effort to increase safety and curb underage driving. (Tim Flack / S&S)

YONGSAN GARRISON, South Korea &#8212; Base officials are putting the brakes on some scooter riders by taking steps to curb underage drivers and reduce safety violations.

The scooters, which are commonly called mo-peds, must have a registration decal from the Provost Marshal&#8217;s Pass and ID Office at Camp Kim, said John Nowell, 34th Support Group spokesman. Vehicles without the decal, which is good for one year, will not be allowed on base, he said.

Defense Department personnel must be at least 16 years old to operate a vehicle on base, said Ricky Oxendine, law and order officer for the 34th Support Group. In South Korea, the legal driving age is 18, so American 16- and 17-year-olds cannot drive off-base. However, Oxendine said, South Korean police have caught underage SOFA personnel operating vehicles off-post.

Problems also have surfaced involving people who thought they didn&#8217;t need a motorcycle license to drive the scooters. Riders without a valid U.S. motorcycle license must complete a free motorcycle safety course before operating a scooter. Those riders who are licensed in the United States can ride motorcycles within U.S. Forces Korea, Oxendine said.

Requiring registration also makes it easier to track such vehicles coming onto post, Oxendine said, adding that about 230 scooters 49 cc and below are in Area II.

One scooter per family is authorized. Scooters shipped to South Korea or recently purchased should be registered within 10 days.