Science fair for homeschooled in Europe set for January 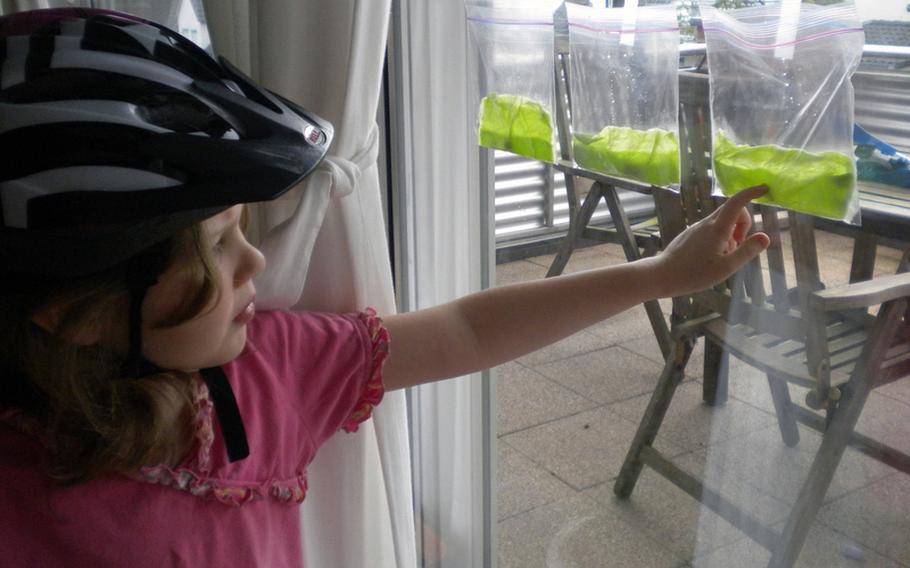 First-grader Katherine Hopkins examines bags of bean sprouts to see which ones will grow the fastest and tallest in three weeks, a homegrown science project to study photosynthesis. Hopkins is homeschooled in her Kaiserslautern-area home. She&#39;ll get the chance to experiment with science along with some of her peers at a science fair planned in January at Ramstein for homeschoolers. (Courtesy of Amy Hopkins)

KAISERSLAUTERN, Germany &mdash; Homeschooled children attached to the U.S. military community in Europe have the chance to compete in a science fair in January at Ramstein Air Base, thanks to the efforts of a newly formed European Home School Science Association.

The group is organizing the event to give homeschooled children &ldquo;a venue and an opportunity to participate in a science fair,&rdquo; said Amy Hopkins, who homeschools her three children.

The spirit of competition and the excitement about science generated by a fair is difficult to replicate at home, she said. If she were to hold a science fair in her living room, it&rsquo;s not much of a contest: &ldquo;I have first, second and third place,&rdquo; she quipped, referring to her three kids.

The fair provides &ldquo;an opportunity for kids to see not only what they can learn by asking the right questions, but also to see what other children discover,&rdquo; Hopkins said.

The fair&rsquo;s theme is &ldquo;Humans and Our Planet,&rdquo; which encompasses many of the sciences, Hopkins said. For example, &ldquo;You could do an experiment on how to reduce trash by packaging differently.&rdquo;

Homeschoolers who wish to participate must be children of U.S. Department of Defense ID card holders. The registration deadline is Nov. 15. Registration can be completed online at www.ehssa.weebly.com, where contest details are also available. There is a fee of $8 per child and competition is divided by age: Level 1, 7 and under; Level 2, 8-10; Level 3, 11-13; Level 4, 14-18. The contest will be Jan. 20.

If enough students participate, she said, the fair in another year can serve as a regional contest for the Intel International Science and Engineering Fair, which annually brings together more than 1,500 students from 65 nations to compete for scholarships, grants and other prizes, according to the fair&rsquo;s Web site, http://www.societyforscience.org/isef/

&ldquo;Right now, we&rsquo;re just trying to get established,&rdquo; she said.

The inaugural science fair is just one of several opportunities for homeschooling families in the Kaiserslautern area to get together for group activities, such as field trips.

&ldquo;I just wanted to have a group to where anybody could come,&rdquo; she said, &ldquo;no matter how they homeschool or how they parent; everybody&rsquo;s welcome.&rdquo;

Such activities give Ponder&rsquo;s homeschooled fourth-grader a chance for social interaction, as do the Irish dance lessons she takes several times a week.

About 100 families are members of the KIHS online yahoo group, Ponder said. &ldquo;After it formed, it really did seem to grow pretty rapidly.&rdquo;

The science fair is not the first group activity Hopkins has organized. A history cooperative of five families meets on Mondays. They&rsquo;re delving into the Vikings next, with lessons planned on Viking geography, food and weaving on a drop spindle, among other things.