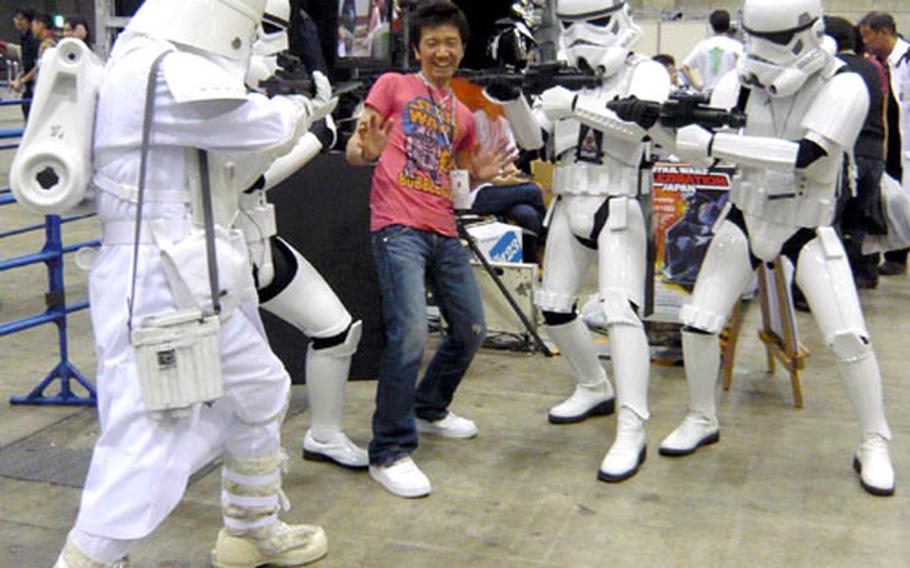 A fan poses with Storm Troopers for a photo opportunity Saturday during Star Wars Celebration Japan. The event runs through Monday at the Makuhari Messe convention center. (Hana Kusumoto / S&S)

A fan poses with Storm Troopers for a photo opportunity Saturday during Star Wars Celebration Japan. The event runs through Monday at the Makuhari Messe convention center. (Hana Kusumoto / S&S) 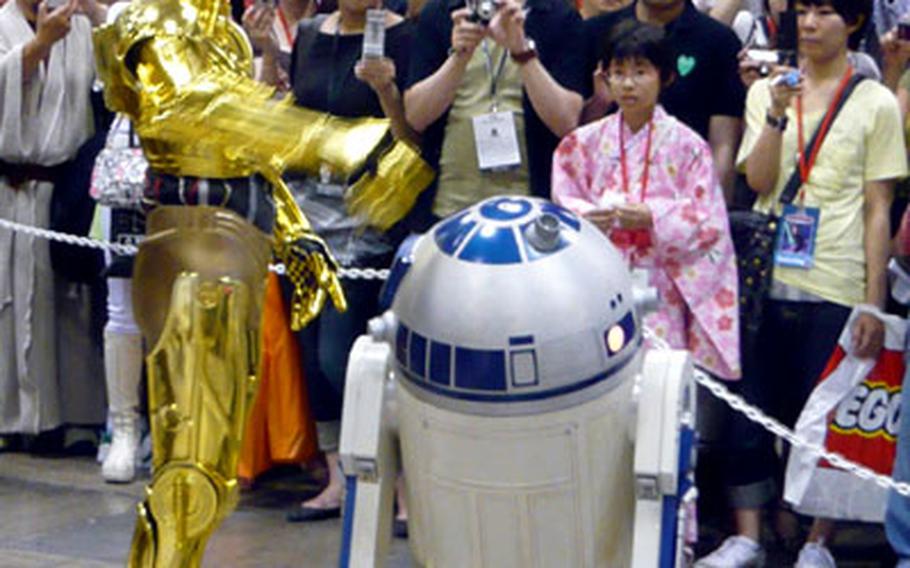 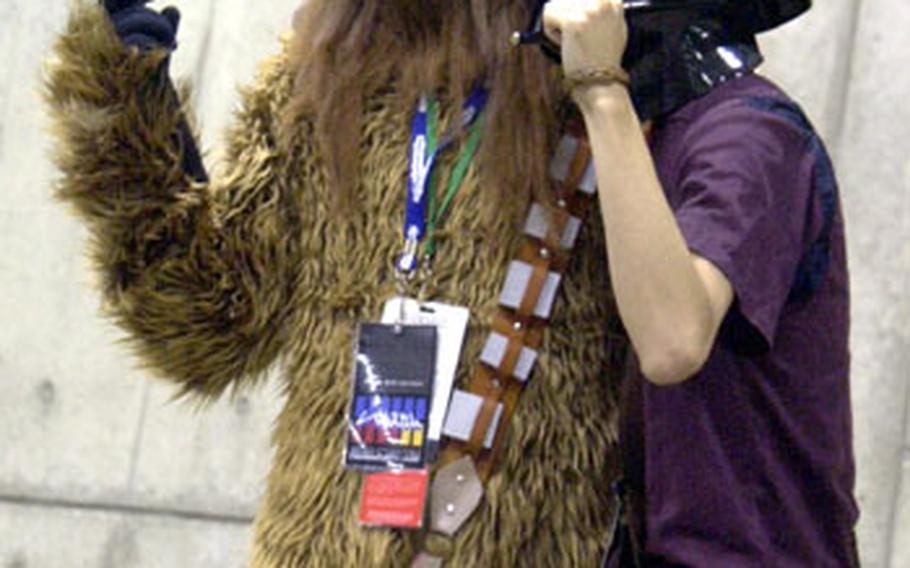 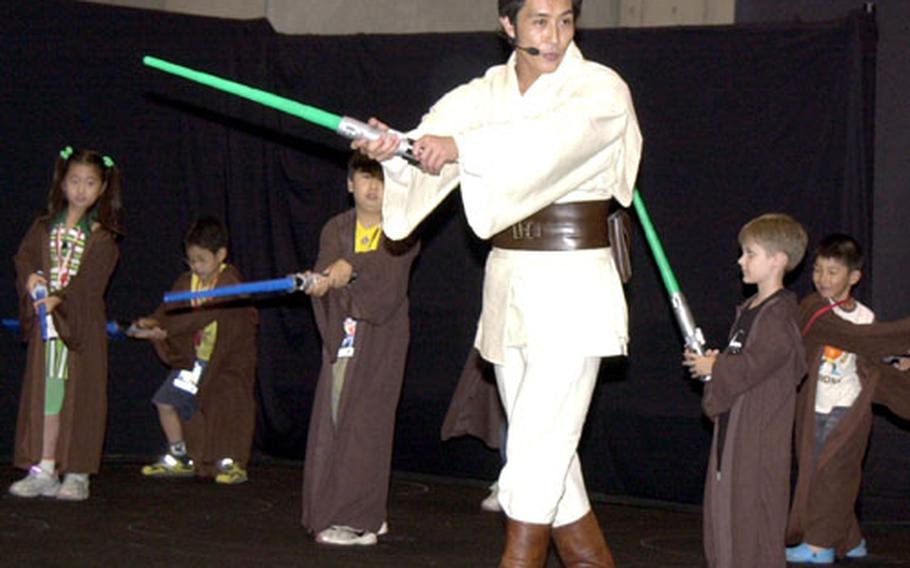 Kids take the stage to learn the jedi arts from a professional at Star Wars Celebration Japan. (Tim Wightman / S&S) 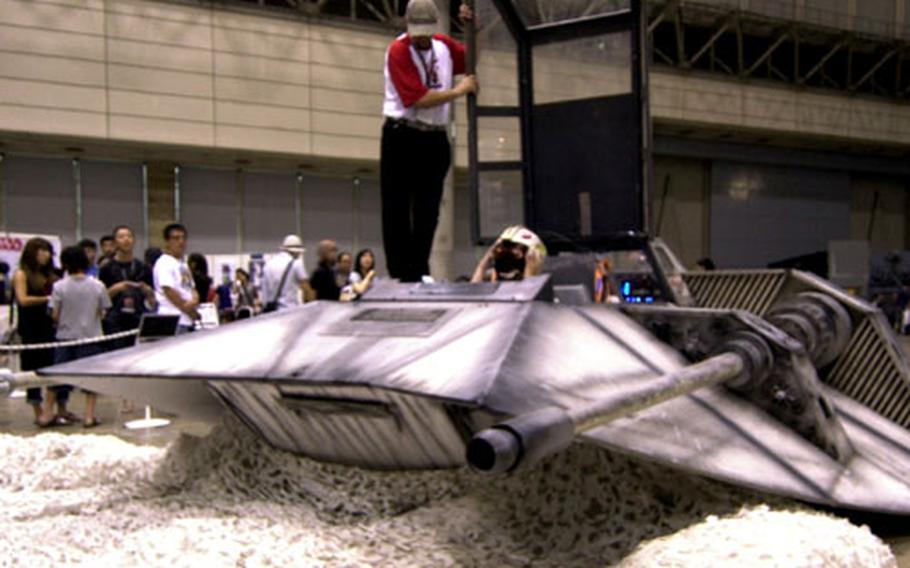 A fan straps on her helmet after climbing into a Star Wars aircraft Saturday at Star Wars Celebration Japan. (Tim Wightman / S&S)

For three days, a certain galaxy was not so far, far away from Japan.

The entire Star Wars universe was on display Saturday through Monday for fans new and old at the Star Wars Celebration Japan at the Makuhari Messe convention center. The event brought out celebrities, exhibits, costumes and merchandise depicting characters and situations from all six Star Wars movies along with the upcoming "Clone Wars" animated movie.

The event celebrated the 30th anniversary of the release of the original "Star Wars" movie in Japan. Star Wars celebrations have been held in the U.S. periodically since the 1997 release of the special edition Star Wars movies.

"We realized we had a great opportunity with the fact that &#8216;Star Wars&#8217; actually opened a year later in Japan," said John Singh, Lucasfilm director of entertainment and publicity. "The Japanese audiences have been incredibly faithful to Star Wars and just made these movies remarkably successful and long-lived."

The fans came out in droves. Among them was Jason McDonald, a first class petty officer stationed at Yokosuka Naval Base.

McDonald said the costumed actors walking around the grounds helped make the experience for him. One of those who came in costume was an Osaka woman who declined to give her name but identified herself as Shibaura. She said she uses the nickname when she dresses up as various characters. At Celebration Japan she donned an Obi-Wan Kenobi getup.

"I go anywhere if we can dress up," she said.

Shibaura said she has been a Star Wars fan since she first saw the film as a child. "I love the fact I can get into the character, and I love everything about Obi-Wan Kenobi."

"This is an event that has been going on in America but I couldn&#8217;t go," said Yuki Oshima, who dressed up as a clone trooper. "I thought I would never be able to go. I thought this will be the first and the last opportunity."

The gun used by Chewbacca in the Death Star is a World War II German MG 34.The sound of Luke Skywalker&#8217;s landspeeder was made by recording sounds from a Los Angeles highway and mixing them with vacuum cleaner noise.Luke&#8217;s line "I can&#8217;t see a thing in this helmet" was not scripted. Mark Hamill said this to Harrison Ford, who played Han Solo, when he thought the cameras had stopped rolling. The filmmakers left the line in.In the Jawa&#8217;s Sandcrawler, a shiny droid says, "Je t&#8217;ai coup&#233; les patates avec des choux," which in French translates to "I cut your potatoes with cabbages."When "Star Wars" was written, the studio thought it would be so unpopular that plans were made to cut it up into 20-minute shows for a Saturday morning children&#8217;s program.The last thing Greedo says before Han Solo shoots him is "Yokuuskaa." This is a tribute to Mark Hamill having graduated from Nile C. Kinnick High School on Yokosuka Naval Base, Japan.Source: www.moviemistakes.com