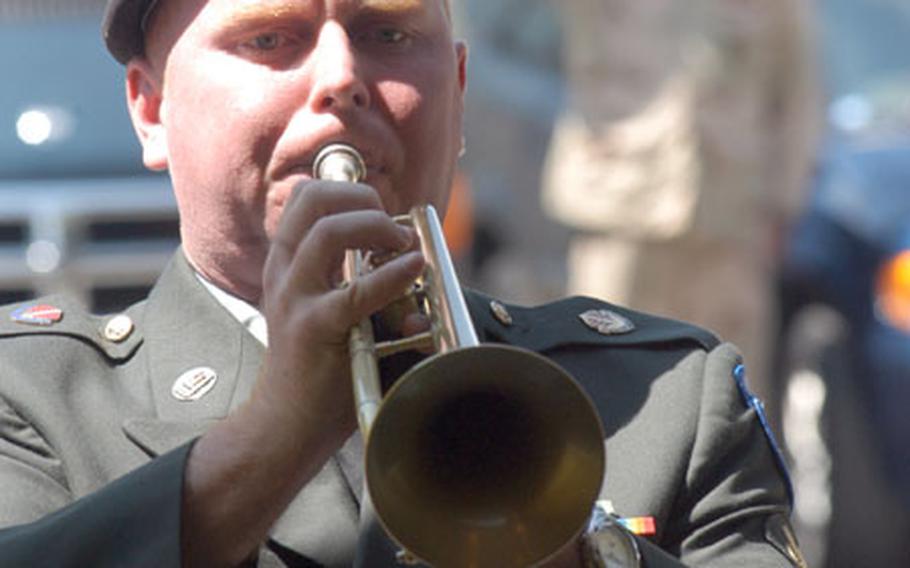 Spc. Daniel May, of the U.S. Army Europe Band and Choir plays taps at the memorial service in Schweinfurt, Germany, on Thursday for Spc. Nicholas J. Zangara and Pfc. Nicholas H. Blodgett. The 1st Infantry Division soldiers were killed in Iraq on July 24. (Michael Abrams / S&S) SCHWEINFURT, Germany &#8212; Pfc. Nicholas Zangara and Pfc. Nicholas Blodgett probably never met, and they didn&#8217;t have much in common. One came from the city, the other from the suburbs; one brash, the other reserved; one married, one a bachelor.

But they shared the same first name, and a calling, and a sacrifice.

On Thursday, their boots, rifles, helmets and photos stood side-by-side on the altar of the Ledward Barracks chapel in Schweinfurt as more than 200 friends and fellow soldiers gathered to remember their lives while mourning their combat deaths.

&#8220;Both of these soldiers named Nicholas have shown their love: They laid down their lives for us,&#8221; said Maj. David Mikkelsen, chaplain for the Schweinfurt-based 280th Base Support Battalion. &#8220;We need great friends like Nicholas Zangara and Nicholas Blodgett.&#8221;

Blodgett, 21, grew up in Wyoming, Mich., and graduated from Grand Rapids Central Catholic High School in 2002. He played trumpet in the school band and practiced tae kwon do.

After joining the Army in May 2003, he landed in Germany with the 1st Infantry Division&#8217;s 1st Squadron, 4th Cavalry Regiment. He trained first as a driver, then as a dismounted scout, in the unit&#8217;s Troop A before the unit deployed to Iraq in February.

Blodgett had joined more than 100 patrols when he and his squad left Forward Operating Base McKenzie, 60 miles north of Baghdad, late on the night of July 20 for a patrol in nearby Abdalluyah. He was driving &#8212; filling in for another soldier on R&R leave &#8212; when his Bradley fighting vehicle hit a roadside bomb. He died, and six of his buddies were injured.

Friends recalled a quiet, gangly trooper who stood 6-foot-5, had a quirky sense of humor, and who was a third-level master in the role-playing game &#8220;Dungeons and Dragons.&#8221;

Blodgett is survived by his parents, Robert and Rita, and his 20-year-old brother, Matthew.

Zangara, 21, was born in Philadelphia, 25 days after Blodgett.

He joined the Army straight out of high school and landed with the Schweinfurt-based 1st Battalion, 7th Field Artillery Regiment after training as a 13D fire-direction specialist. He deployed to the Middle East with his unit in February.

Zangara was in his Humvee, the trail vehicle of a patrol escorting a fuel convoy to Tikrit along Iraq&#8217;s Highway 1 on the scorching afternoon of July 24 when an improvised bomb exploded beside the road and lacerated him with shrapnel.

Only a little while earlier, he had called his wife, Melanie, to wish her a happy birthday, according to the Delaware County (Pa.) Daily Times newspaper. He told her he would be going home on leave next week.

His buddies remembered &#8220;Specialist Z&#8221; as a fun-loving motor mouth who loved Philadelphia sports teams and always had a wisecrack on the tip of his tongue. But he was serious about the Army, and he knew his weapons systems cold.