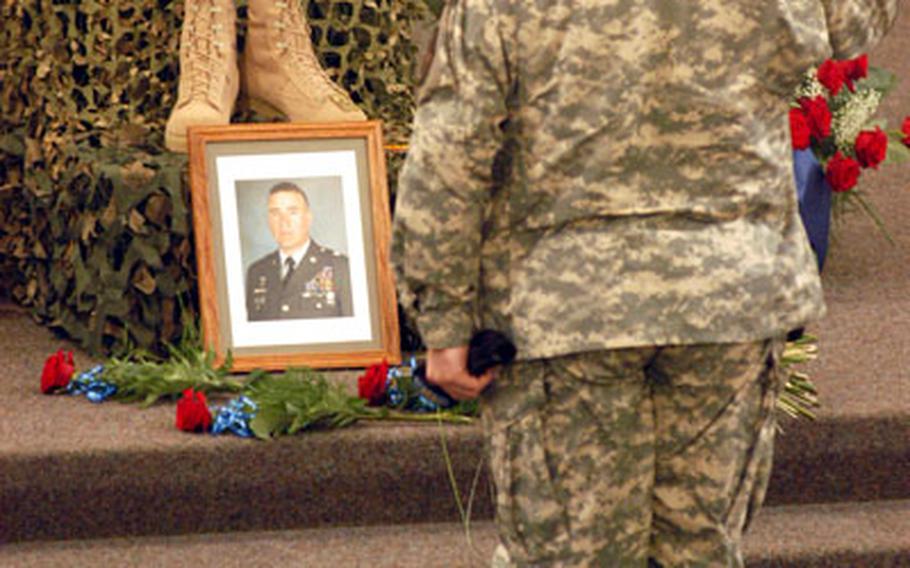 SCHWEINFURT, Germany &#8212; They said he led in every way possible, at home and on the frontlines of Iraq.

&#8220;I remember walking into his room one evening and it was sweltering hot,&#8221; Capt. Jacob E. White said in reference to Jeffrey R. McKinney, who died two weeks ago in Baghdad about a month after being promoted to master sergeant.

McKinney, 40, died July 11 in Baghdad of what the Defense Department characterized a few days later as &#8220;a noncombat related incident.&#8221; Since then, the Army has stated he was felled by a gunshot wound, but little else has been released.

Army officials in Schweinfurt this week would only say the incident is under investigation.

Based on what was said at his memorial ceremony Wednesday, McKinney was an exemplary and dedicated soldier, a role model. A 19-year-veteran, he had just been tabbed to serve as the first sergeant for Company A, 1st Battalion, 26th Infantry Regiment, 2nd Brigade, 1st Infantry Division.

One day, three weeks before McKinney&#8217;s death, Greaves noticed his first sergeant on his knees scrubbing blood off a patch of concrete. One of McKinney&#8217;s soldiers had just been struck by a roadside bomb in Kadhimiya, a northern neighborhood of Baghdad.

Other soldiers were in the vicinity, too, picking up pieces of the wreckage, but McKinney caught Greaves&#8217; attention.

There were other poignant remembrances, especially by his good buddy, 1st Sgt. Kevin Floyd, who called McKinney a &#8220;kind- hearted human being.&#8221;

McKinney, of Garland, Texas, is survived by a wife and two sons.