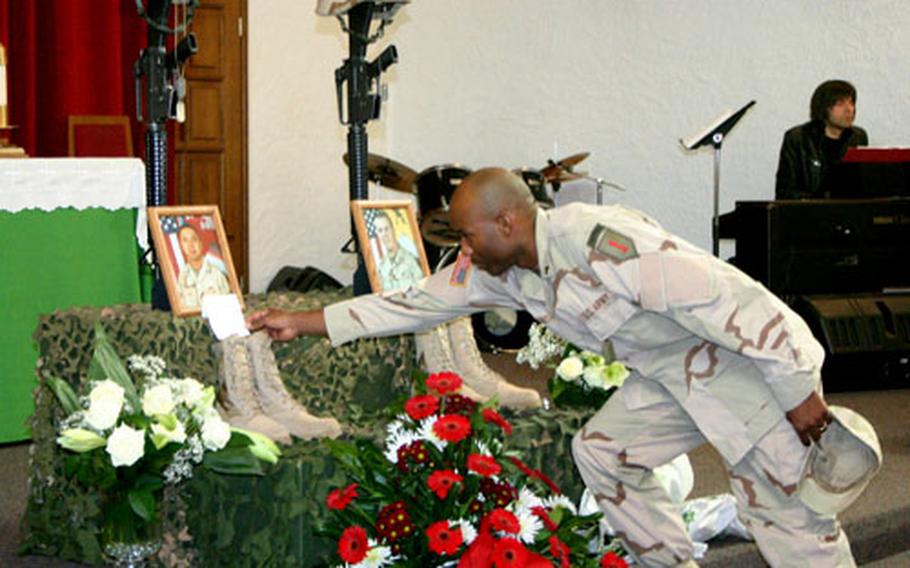 Sgt. Idris Smith of the 9th Engineer Battalion places a card with the Sapper Creed under the photo of Sgt. 1st Class Villanueva at the memorial service. (Kristen Chandler Toth / U.S. Army)

Sgt. Idris Smith of the 9th Engineer Battalion places a card with the Sapper Creed under the photo of Sgt. 1st Class Villanueva at the memorial service. (Kristen Chandler Toth / U.S. Army) 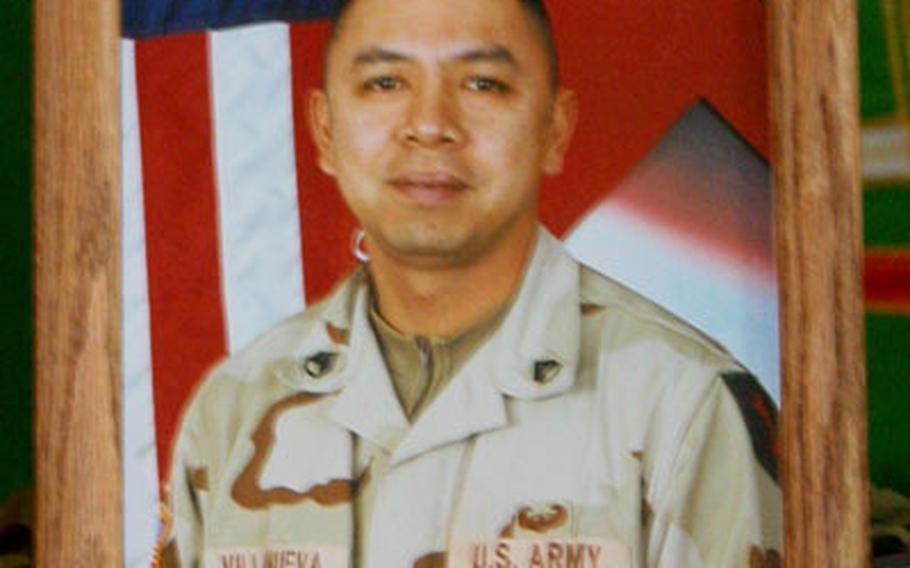 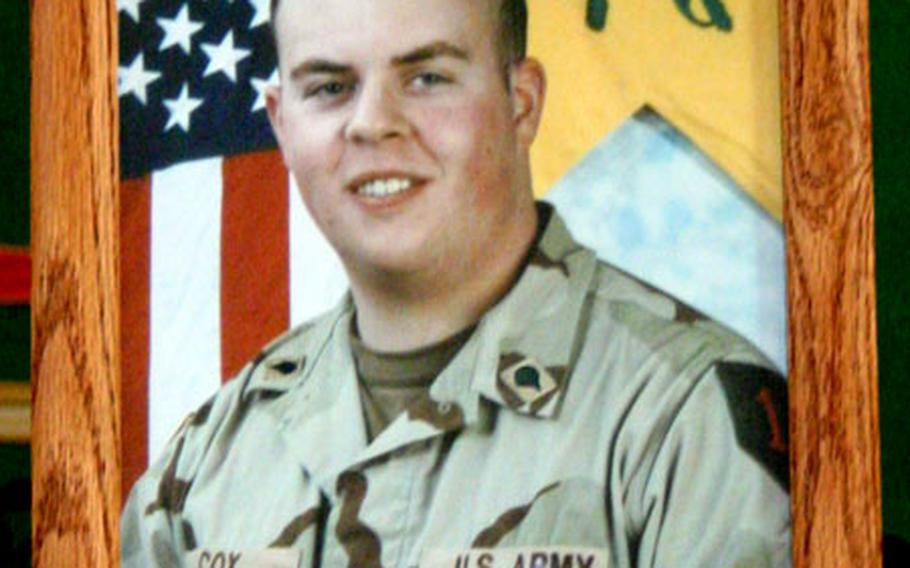 Sgt. 1st Class Joselito Villanueva charmed friends with his quick wit and jolly laugh, and he took care of his men like family. Spc. Gregory Cox said little but worked hard at the tough job of soldiering in Iraq.

Last spring, the two men both landed with Task Force 1-77 in Iraq, and they both died within an hour of each other Sept. 27 in separate incidents near their home base at Balad.

A Schweinfurt community weary of loss gathered Wednesday at the Ledward Barracks chapel to mourn them. They are the 28th and 29th Schweinfurt-based soldiers killed in action since the 1st Infantry Division deployed to Iraq last spring.

Villanueva, 36, of the 9th Engineer Battalion, was born in the Philippines, but his family later moved to Van Nuys, Calif. He joined the Army in 1986, served in Operation Desert Storm and arrived in Schweinfurt in 2000.

His sunny personality quickly endeared &#8220;Sergeant V&#8221; to many of his fellow soldiers and their families.

Villanueva served in Kosovo with his unit in 2002, and he deployed to Iraq last February as the platoon sergeant for Company C&#8217;s 2nd platoon. He looked out for his men.

Villanueva earned a Purple Heart last April when a roadside bomb exploded next to his Humvee, killing one of his soldiers. A small piece of shrapnel pierced his neck, and he nearly died, too.

About 8:30 a.m. Sept. 27, Villaneuva&#8217;s patrol stopped to aid an Iraqi truck driver who had been driving erratically and crashed his truck. As Villanueva got out to help, a hidden sniper fatally shot him. No one else was injured.

Cox had died a short time earlier, when his Humvee was run off the road by an Iraqi driver &#8212; unintentionally, according to a Pentagon statement &#8212; and rolled over.

Cox grew up in Carmichaels, Pa., part of a tightly knit Catholic family. He and his sister, Nicole, worked together as altar servers at their church until his high school years, according to the Pittsburgh Tribune-Review.

He played youth soccer and basketball and impressed friends with his dry sense of humor.

Parrish is now a student at West Virginia University.

Cox joined the Army after graduating from high school in 2001 and left for basic training just days before the Sept. 11, 2001, terror attacks. The next April, he joined Company C of the 1st Battalion, 77th Armor Regiment.

Last February, Cox deployed with his unit to Iraq. Trained on tanks, he quickly learned the infantryman&#8217;s trade because of Task Force 1-77&#8217;s mission. He had recently returned from a mid-tour leave spent with his family in Pennsylvania.

Cox is survived by his parents, John and Mary Anne Cox, and his sister, Nicole.

Villanueva is survived by his parents, Edito and Pilarita Villanueva. Both soldiers were posthumously awarded the Bronze Star and the Purple Heart.