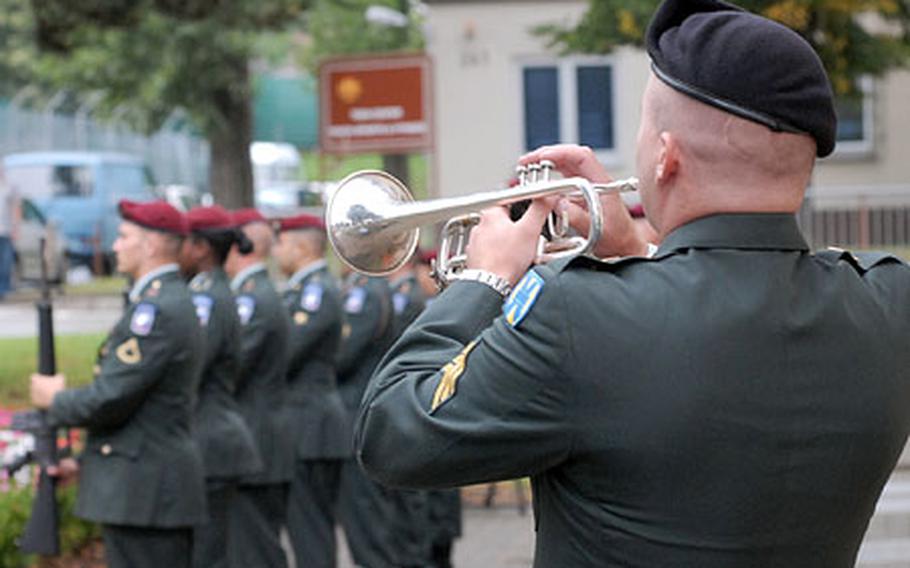 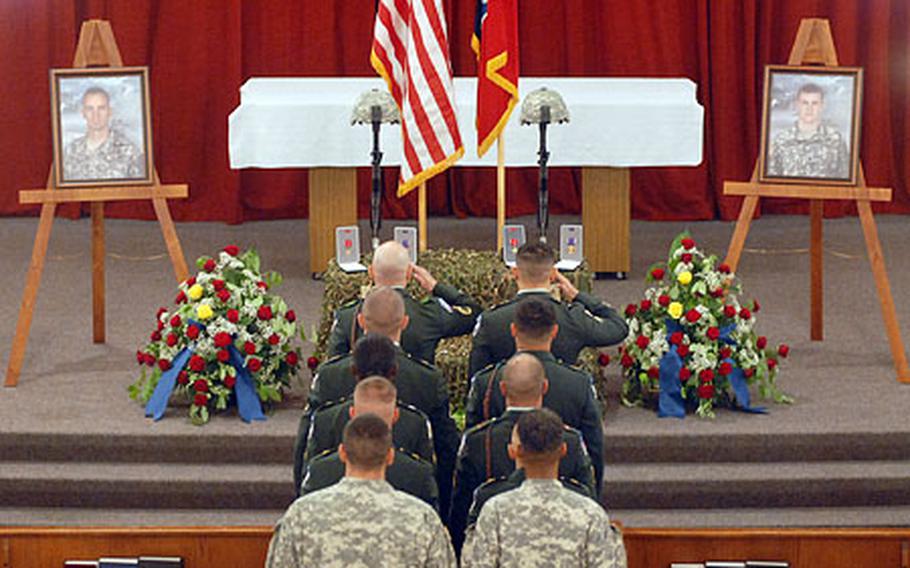 Soldiers give a final salute to Maj. Thomas Bostick Jr. and Staff Sgt. William Fritsche following the memorial service for the two 1st Squadron, 91st Cavalry Regiment soldiers at Ledward Barracks in Schweinfurt, Germany on Wednesday. Bostick and Fritsche were killed in a fire fight in Afghanistan on July 27. (Michael Abrams / S&S)

Fritsche was quick to answer.

Maj. Thomas G. Bostick Jr., Fritsche&#8217;s commander, was ready too, but that was always the case. With nearly two decades as an Army Ranger behind him, Bostick had faced combat in Panama, Iraq and numerous other locations he wasn&#8217;t allowed to talk about.

But neither knew exactly what waited for them as they headed out July 27 to assess a village near Afghanistan&#8217;s border with Pakistan. They were trying to find out what kind of humanitarian aid and reconstruction projects the village needed. Both were killed in an ambush near Kamu, Afghanistan.

They were the first soldiers from the Schweinfurt-based Troop B, 1st Squadron, 91st Cavalry Regiment, to die in Afghanistan since the unit deployed there about two months ago. The unit is part of the 173rd Airborne Brigade Combat Team.

The Schweinfurt community gathered Wednesday to remember the two men during a memorial ceremony at the Ledward Barracks chapel.

Bostick was a man of split passions, according to Sgt. Maj. Michael Kennedy, whose remarks from a similar ceremony in Afghanistan were read Wednesday. A dedicated family man and a dedicated soldier, Bostick refused to give up one of those passions for the other.

When his younger daughter, Ashlie, had a soccer game, he&#8217;d be on the sidelines in uniform, knowing his workday was still far from over, Kennedy said. &#8220;A lesser man would have chosen one over the other.&#8221;

Fritsche had been handpicked to be a Troop B squad leader for his quiet competence. A former member of the 3rd Infantry Regiment &#8212; the Army&#8217;s oldest infantry unit and guardian of the Tomb of the Unknowns at Arlington National Cemetery &#8212; he had risen quickly through the ranks, and proved himself in staff jobs in Germany and Afghanistan to earn the position.

During his free time in Afghanistan, a short window between 2 and 4 a.m., &#8220;Fritsche spent every minute reading his Ranger handbook or FM 7-8,&#8221; the Army field manual for platoon- and squad-size infantry units, Hutto said in remarks during the ceremony in Afghanistan.

Fritsche got just one chance to use that knowledge. His squad was ambushed as he led them to higher ground. After taking out an enemy position, he provided cover fire for his men so they could get to safer positions.

&#8220;He cared for his men in a desperate situation by putting his life on the line for them,&#8221; Lt. Col. Christopher Kolenda, 1-91 commander, said at the Afghanistan ceremony.

Meanwhile, as the ambush raged, Bostick conducted his unit&#8217;s response like a maestro would an orchestra. There were far more enemy fighters than there were soldiers under his command, but Bostick stayed calm under the oppressive fire and was able to get most of his troops into more defensible positions and provided cover fire to get his troops to safety at the risk of his own life.

&#8220;He even managed to crack a few jokes to keep everyone steady in the heat of the moment,&#8221; Kolenda said at the Afghanistan ceremony.

In one of his last messages to Kolenda, Bostick wrote that he was going out to drive cars and shoot guns.