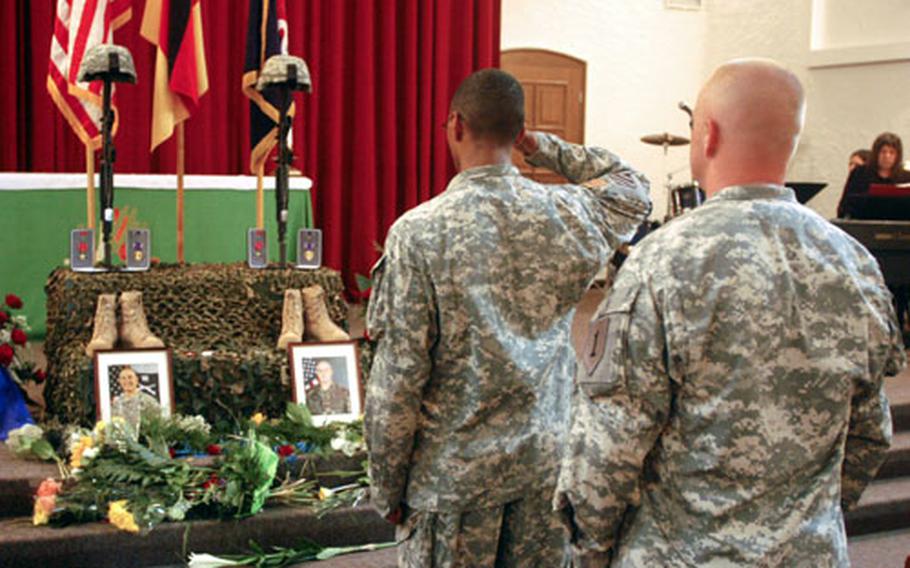 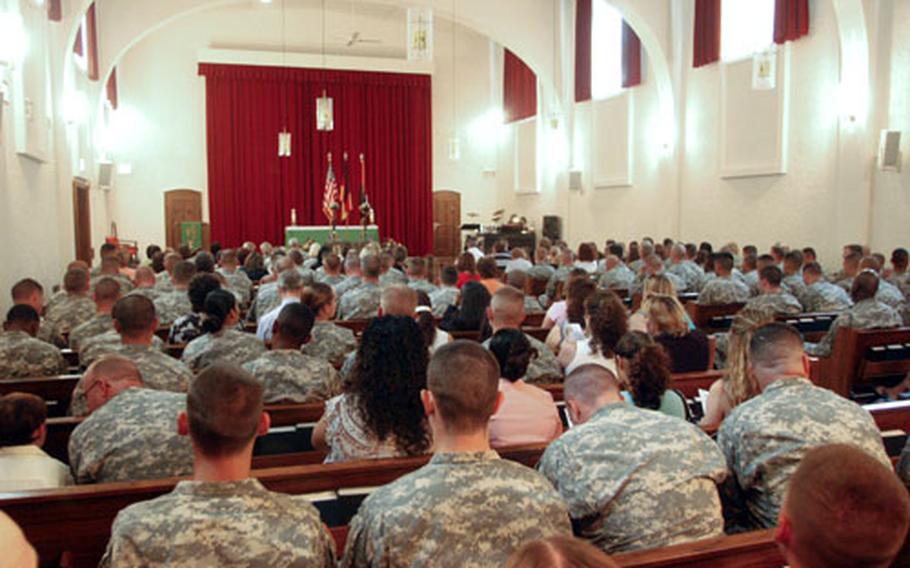 They died of small-arms fire on the second day of an operation to clear an insurgent stronghold.

As 400 people stood inside the chapel and silently bowed their heads for the opening prayer, women dabbed their eyes with tissues and a baby cooed.

The two sergeants are among more than 50 soldiers with Schweinfurt&#8217;s 2nd Brigade, 1st Infantry Division who have died in combat in Iraq in the past year.

Tributes from downrange were read inside the chapel, including one for Buchan from Maj. Adam Rudy, Buchan&#8217;s company commander.

Rudy gave Buchan much credit for helping change Ta&#8217;meem from a volatile, dangerous neighborhood into a relatively peaceful one with a functioning Iraqi police force.

&#8220;As the city changed, so did Sgt. 1st Class Buchan,&#8221; Rudy wrote in his tribute. &#8220;He was known by many of the locals as the guy who stopped by just to chat with the people or see what issues they had, no matter who they were or what their status was in the community.

&#8220;After his passing, I attended the Ta&#8217;meem council meeting. It quickly became apparent what kind of an impact he had on the city. Without me saying anything to the council, local members came up and offered their condolences by name for Sgt. 1st Class Buchan.&#8221;

Buchan was described as the picture of power and intelligence, fully able to solve the problems of the battlefield, either as a warrior or a diplomat.

Ruoff was the son of a Vietnam veteran and leader of his own band of brothers, the personal security detail for Lt. Col. Miciotto Johnson, commander of Task Force 1-77 Armor.

His job included planning and executing Johnson&#8217;s safe travel throughout his area of responsibility in the war zone.

Outside the chapel at the end of the service, soldiers fired a 21-gun salute and Spc. John Clayburn of the 366th Army Band raised a trumpet to his lips to play taps for the two fallen sergeants.