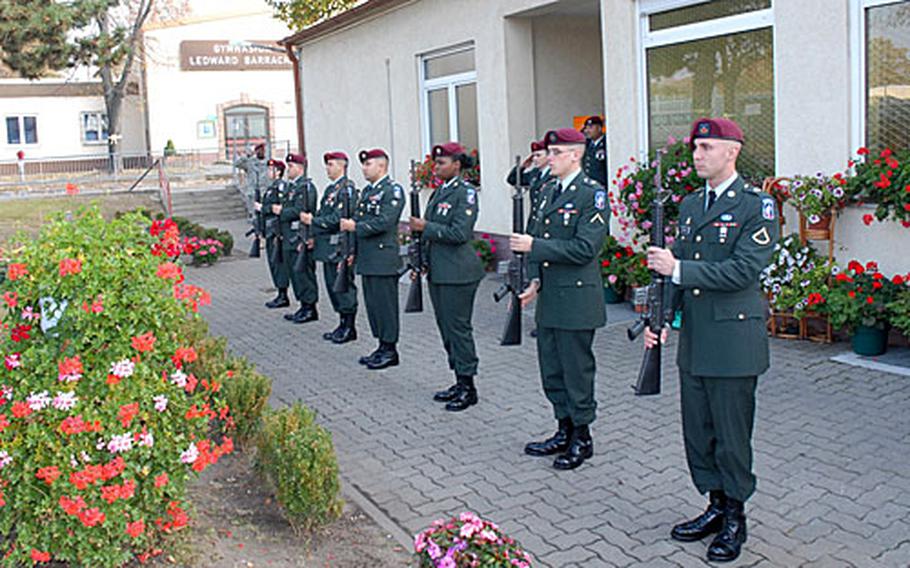 SCHWEINFURT, Germany &#8212; He was a proud paratrooper, a proud husband, a proud father-to-be. On Tuesday, the military community assembled at Ledward Barracks chapel to pay their respects.

During an Aug. 17 firefight at Camp Keating in eastern Afghanistan, Pfeifer was shot after pulling his injured buddies to safety. He was a member of 1st Squadron, 91st Cavalry Regiment, 173rd Airborne Brigade Combat Team &#8220;Sky Soldiers.&#8221;

Rushed to Forward Operating Base Naray after he was hit, Pfeifer was operated on for six hours, using 33 pints of blood. Paratroops lined up to donate. When he was soon moved to Bagram air base en route to the States, more than 100 more servicemembers lined up, said Lt. Col. Chris Kolenda, commander, 1-91, in an Oct. 1 ceremony in Afghanistan, whose remarks were read by 1-91 rear detachment commander, Capt. John Opladen, during the Tuesday service.

He was absolutely committed to the mission and the team, Kolenda said of Pfeifer.

&#8220;In difficult times, tough things are asked of tough men &#8230; We will remember his smile, remember his professionalism, remember his devotion to his team, but most of all, we will remember his toughness,&#8221; Kolenda said of Pfeifer, who had taken part in all of the most intense battles the cavalrymen of 1-91 had seen since entering Afghanistan.

While in high school at Spalding Academy, Pfeifer played both offense and defense on his school&#8217;s small football team. He also played drums in the school band.

After school, Pfeifer joined the Job Corps in Chadron, Neb., where he spent time working with heavy construction equipment and drywall.

He also met a girl named Karen, whom he married in March 2006. A month later, Pfeifer was in basic training. By September, they were starting a life in Germany. When Pfeifer left with the rest of the 173rd for Afghanistan, it was with a baby on the way.

Bursting with pride, Pfeifer wasn&#8217;t shy about showing pictures of a pregnant Karen to anyone who was willing to look. He couldn&#8217;t wait to get home and see his new child, Kolenda said.