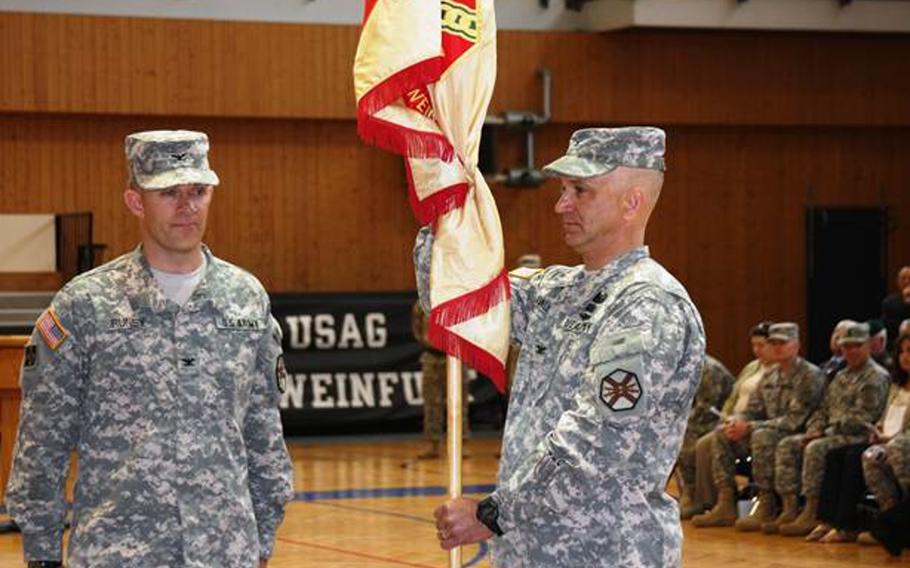 Col. Michael Runey, left, turns over command of the U.S. Army garrison in Schweinfurt, Germany, to Col. Kelly Lawler at a ceremony May 22, 2013. The garrison is slated to close this fall. U.S. Army photo (U.S. Army photo)

GRAFENWÖHR, Germany — Nearly 70 years after a U.S. Army garrison was established in Schweinfurt, its final commander relinquished control on Wednesday, leaving day-to-day operations in the hands of a civilian manager as the base prepares for closure in the fall of next year.

Col. Michael Runey spent much of his two-year command trying to offset the loss of soldier, civilian and local national positions to continue services for those who remained. The base population is expected to fall to roughly 3,000 by the end of summer and the moving season, down from 12,000 in February 2012.

Brian Adkins, recently announced as garrison manager, will oversee daily operations of the installation. Formal command falls to Col. Kelly Lawler, commander of the garrison in Ansbach, which is part of the Franconian Military Community, with Schweinfurt and Bamberg.

Established as an Army base in 1945, Schweinfurt was once home to division-level assets. Today, several combat and support battalions call it home, as do headquarters for the 18th Engineer Brigade and the 7th Theater Tactical Signal Brigade.

The decision to close the garrison dates back years to U.S. Army Europe’s announced effort to consolidate communities scattered across Europe into six “enduring” installations. Neither Schweinfurt nor Bamberg were on the list.

USAREUR reaffirmed the decision in February 2012, as the Department of Defense announced drawdowns across the Continent, and it set a deadline of October 2014 for the closure.

Both brigade headquarters will inactivate in the same year. Battalions with the 172nd Separate Infantry Brigade will disappear in the coming weeks, as the full brigade inactivates, while a cavalry squadron with the 173rd Airborne Brigade Combat Team will move to Grafenwöhr, an enduring installation.

Some soldiers and families are still receiving orders for the installation, although that is expected to end in the coming months, a garrison spokesman said.

Runey thanked garrison employees, soldiers and commanders, according to copies of their remarks.

“We, USAG Schweinfurt, have been honored to be a part of enabling your units to prepare for and accomplish your missions,” Runey said. “You are why we exist, and we are so incredibly proud of you.”

“Through incredible foresight, Col. Runey has anticipated many of the difficulties that accompany closure,” he said, according to a copy of his remarks.

CorrectionThe original story said the Schweinfurt garrison would close in the fall. It will be closing in the fall of 2014.