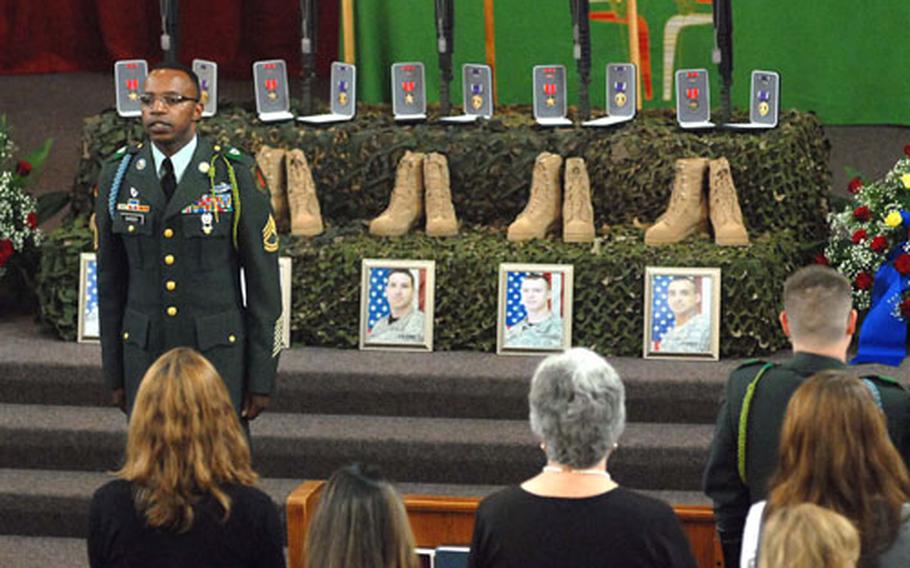 A row of helmets, weapons and dog tags make up a memorial for five soldiers killed in Iraq in June 2007. (Michael Abrams/Stars and Stripes) 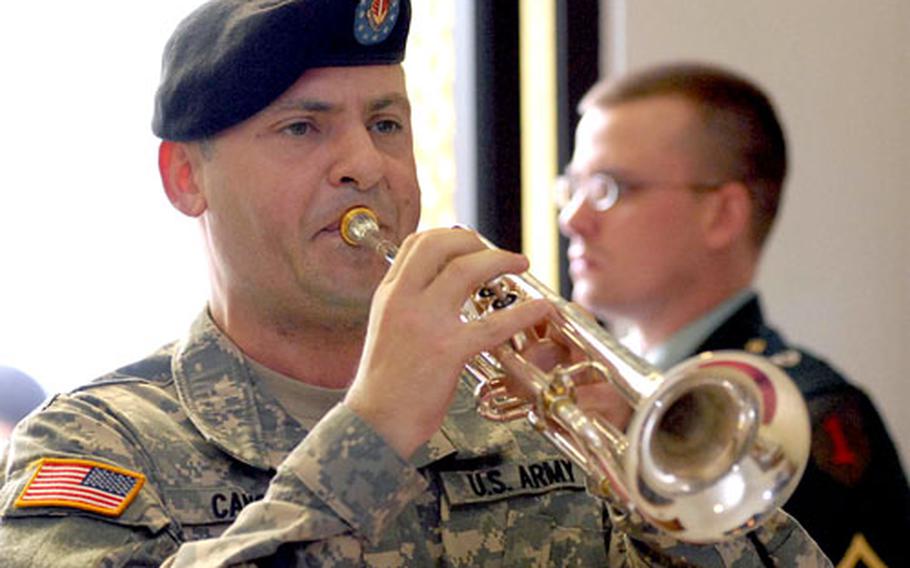 Staff Sgt. Kenneth Cancio, of the USAREUR Band and Chorus, plays taps for the fallen servicemembers at the end of the memorial ceremony. (Michael Abrams / S&S) 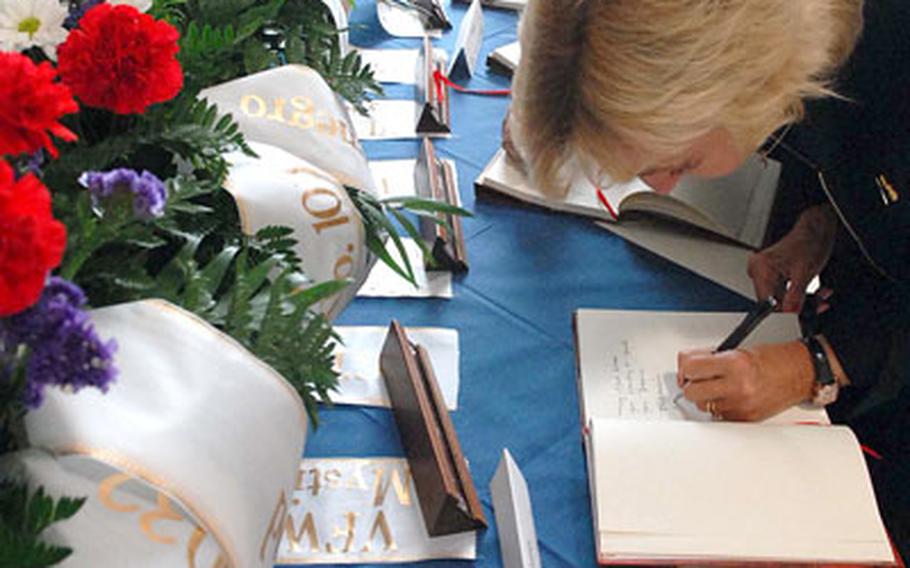 SCHWEINFURT, Germany &#8212; Spc. Anthony D. Hebert knew how to live life. Death, well, he treated that like a joke.

So did many of his buddies in his platoon, the &#8220;Outlaws&#8221; of Company C, 1st Battalion, 26th Infantry Regiment. They kept a tally of who had been through the most bomb attacks, and the guy with the highest total by deployment&#8217;s end would be declared the winner.

Going into the third week of June, Hebert, Sgt. Alphonso Montenegro Jr. and Spc. Thomas Ray Leemhuis were ahead of everybody.

They joked there was one way to win the game automatically, but this wasn&#8217;t something the average person would find humorous, a fellow soldier admitted. If one of them died in one of the blasts, he got to bring the bragging rights into the afterlife.

But Hebert, Montenegro and Leemhuis, along with Spc. Daniel J. Agami and Sgt. Ryan M. Wood, &#8220;all tied for first and are going to have to share those rights up in heaven now,&#8221; Pfc. Marcus Leslie said during a memorial service for the soldiers Sunday in Iraq.

All five soldiers were killed in a roadside blast June 21 as they patrolled a Baghdad neighborhood in their Bradley fighting vehicle.

The community the brigade calls home gathered to remember the five fallen men Tuesday in a memorial ceremony at the Ledward Barracks chapel.

Comments made by some of the soldiers&#8217; comrades and leaders in Iraq were read at the ceremony Tuesday.

Sgt. Alphonso Montenegro, known as Monte, &#8220;was one of the most caring and funny guys I have ever met,&#8221; Staff Sgt. Raja A. Richardson read. But Monte was also known for his mouth, which sometimes got him in trouble.

The platoon was the most tight-knit in the battalion, and &#8220;Monte was like the gatekeeper of the Outlaws, always challenging new personnel no matter what rank,&#8221; Richardson read. &#8220;But once you earned a spot in his mind, you had earned a spot in the Outlaws.&#8221;

Agami, like Montenegro, was fiercely loyal to his fellow soldiers, but also to his Jewish heritage. Despite his grandfather&#8217;s fears, he proudly displayed an Israeli flag where others would see it. He also traveled all over Iraq in order to observe the Jewish holidays and often had to scrounge up meals on his own because the local dining facility neglected to make anything kosher.

Agami watched out for his friends with the same care he observed his religion.

After the laundry service lost one sergeant&#8217;s clothes, he returned from a mission to find a fresh stack of shirts and socks on his bunk. It took him two days to figure out Agami, a private first class at the time, had given him the clothes.

Leemhuis, an American Indian, was also proud of his heritage, read Sgt. DeQuinn D. Nickerson. He was always sitting in his room singing songs his roommate didn&#8217;t understand, but the two grew close.

Leemhuis helped his roommate get through an emotional period after their squad leader was killed, and Leemhuis &#8220;never would tell you &#8216;no&#8217; if you asked him to do something,&#8221; Nickerson read.

Leemhuis&#8217; roommate gave him a cigarette case as a gift, but Leemhuis misplaced it when the Outlaws moved to a new base. The roommate found it when he was packing the fallen soldier&#8217;s things, and included it among the personal effects that were mailed to his mother.

After a fellow Outlaw was shot by a sniper Oct. 2, 2006, Wood jumped from the safety of his armored vehicle and led an infantry team down alleys and into houses to clear possible sniper positions. Over the following months, Wood led countless patrols with the same fearlessness.

Wood, Leemhuis, Agami and Montenegro had all earned the coveted &#8220;Hebert Tab,&#8221; an unofficial award that Hebert doled out to soldiers who could make him laugh.

Hebert was just the guy to come up with such an award.

Leslie said that during one tense operation when the soldiers had to enter an Iraqi house, Hebert exited the home wearing a long brown wig, and, &#8220;someone asked over the radio if anyone knew who the hot chick was.&#8221;

They knew there was only one person it could have been &#8212; Hebert. He had the whole crew laughing along.