Schweinfurt community pays its respects to soldier killed in Iraq 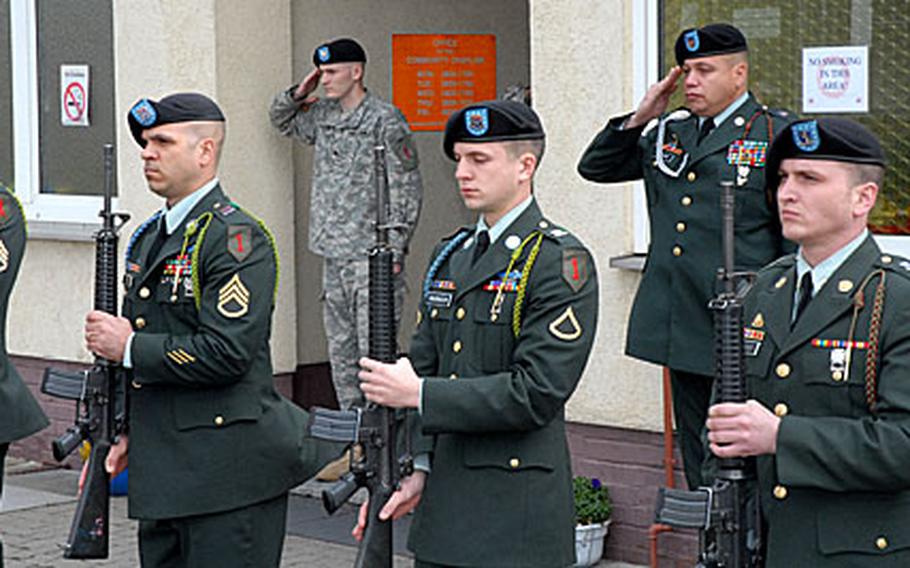 Staff Sgt. Karl O. Soto-Pinedo, 22, was killed Feb. 27 in Baghdad, struck by small-arms fire while on a routine patrol.

He was a member of 1st Battalion, 18th Infantry Regiment, 2nd Brigade Combat Team, 1st Infantry Division. Soto was on his second Iraq deployment with 1-18. Another ceremony honoring Soto-Pinedo was held in Baghdad on March 6.

Born in San Juan, Puerto Rico, Soto-Pinedo enlisted in the Army at 18, completing English language courses before shipping off to infantryman training at Fort Benning, Ga. Inspired by his love of soldiering, he was promoted to staff sergeant in just over four years.

In a message to those gathered Wednesday, Soto-Pinedo&#8217;s brothers-in-arms from Company A, 1-18, said: &#8220;His love for his soldiers and his unit was evident in everything he did. Even though he was the biggest soldier in the company &#8230; [he] was a very humble and caring person.&#8221;

Before he grew up to look like &#8220;one of those marble statues of an ancient Greek warrior,&#8221; Soto-Pinedo was a 5-year-old in Panama, hiding in the jungle and watching American paratroops fall from the sky during Operation Just Cause, Chaplain Seth George said at the ceremony in Baghdad.

It was all the inspiration he needed to become a soldier, he said.

&#8220;Soto was loved by all, friend of all, and could be counted on to complete whatever task was asked of him. I think we would all like to be remembered this fondly. Soto&#8217;s service and, more importantly, his friendship, are achievements we would all like to attain,&#8221; Glaze said.

Soto is survived by his wife, Patricia Leslie Abrego Arosemena of Panama, and his mother, Graciela Isabel Pinedo Chen of San Juan.

He is one of 25 &#8220;Dagger&#8221; Brigade soldiers killed in combat during their yearlong deployment, which began in August and September of last year.