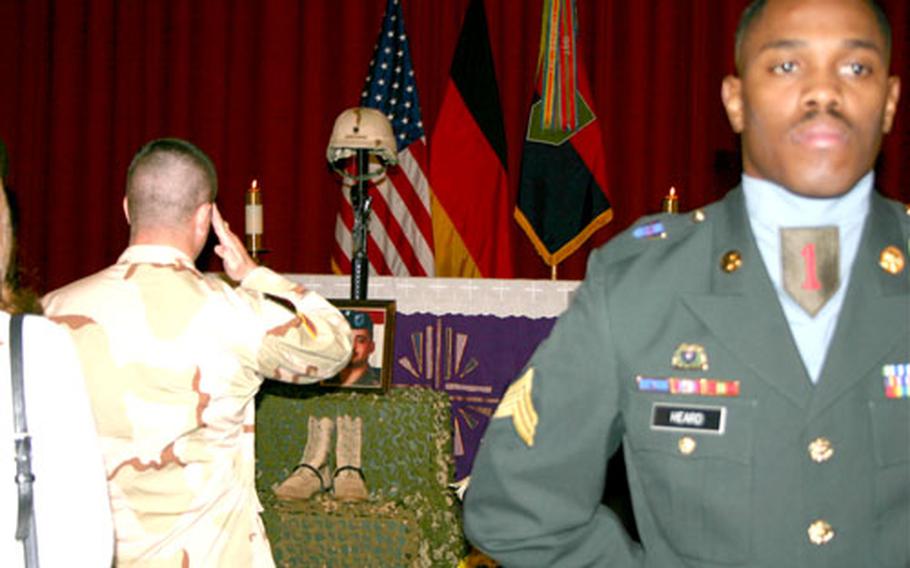 It was hard to get Spc. Jeremy Christensen out of his tank.

The 27-year-old soldier spent more than 3,000 hours on combat patrols aboard a M1 Abrams tank for Troop A of the 1st Infantry Division&#8217;s 1st Squadron, 4th Cavalry Regiment since the unit arrived in Iraq in March. Once he did seven missions almost back to back, said Sgt. 1st Class Cesar Colon, who served in his unit.

On a routine patrol in Ad Duluiyah early Saturday, a powerful roadside bomb made of three 155 mm artillery rounds exploded next to the tank Christensen was driving. Shrapnel from the blast killed him.

Soldiers and friends at the unit&#8217;s home base in Schweinfurt, Germany, gathered in a chapel Friday to remember him, just as his deployed comrades did earlier this week at Forward Operating Base MacKenzie, the 1-4 Cavalry&#8217;s headquarters in Iraq.

Born in Las Vegas, Christensen grew up in Portland, Ore. After earning a high school equivalency degree, he served six years in the Oregon National Guard. He joined the Army shortly after the Sept. 11, 2001, attacks.

Christensen joined the 1-4 Cavalry in Schweinfurt in the fall of 2002 and became buddies with his platoon mates.

Through the high-pressure months of combat just east of Samarra in one of Iraq&#8217;s most dangerous areas, he grew closer than ever with the men in his platoon.

&#8220;We shared our plans about when we would get back home, what we were going to do,&#8221; said Spc. Steven Bishop, his close friend and platoon mate.

Christensen is survived by his father, mother, stepmother, grandmother, and six brothers and sisters. In New Mexico, where Christensen was living when he enlisted, Gov. Bill Richardson ordered flags across the state flown at half-staff in memory of Christensen and another soldier from the state who died Monday in Texas in a military helicopter crash.