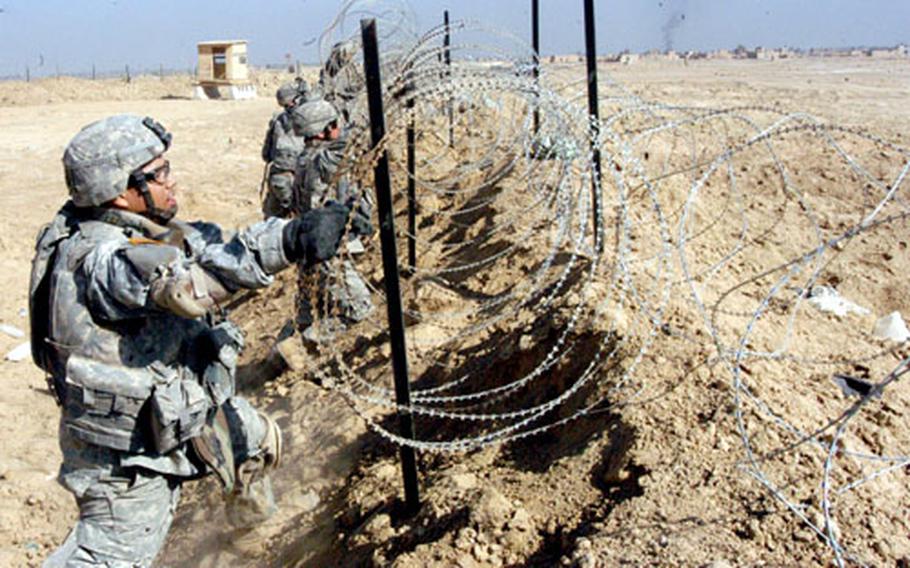 Pfc. Arturo Vargas of San Diego and his unit mates from the 9th Engineer Battalion install concertina wire atop a berm that surrounds the Iraqi police station in Zangora, Iraq, a town near Ramadi. (Charlie Coon / S&S)

Pfc. Arturo Vargas of San Diego and his unit mates from the 9th Engineer Battalion install concertina wire atop a berm that surrounds the Iraqi police station in Zangora, Iraq, a town near Ramadi. (Charlie Coon / S&S) 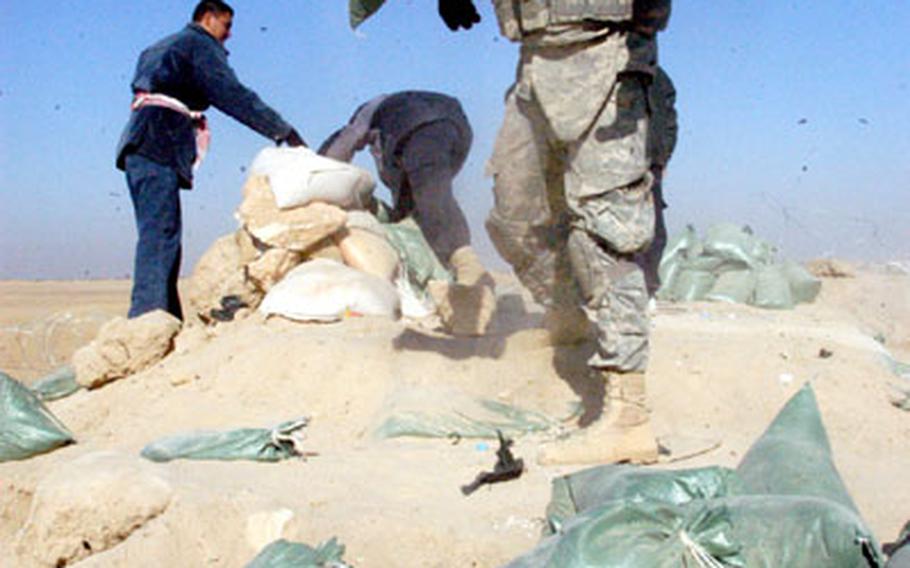 Spc. Steve Johnson of 9th Engineer Battalion tosses another sandbag onto the pile Thursday during construction at the station. (Charlie Coon / S&S) 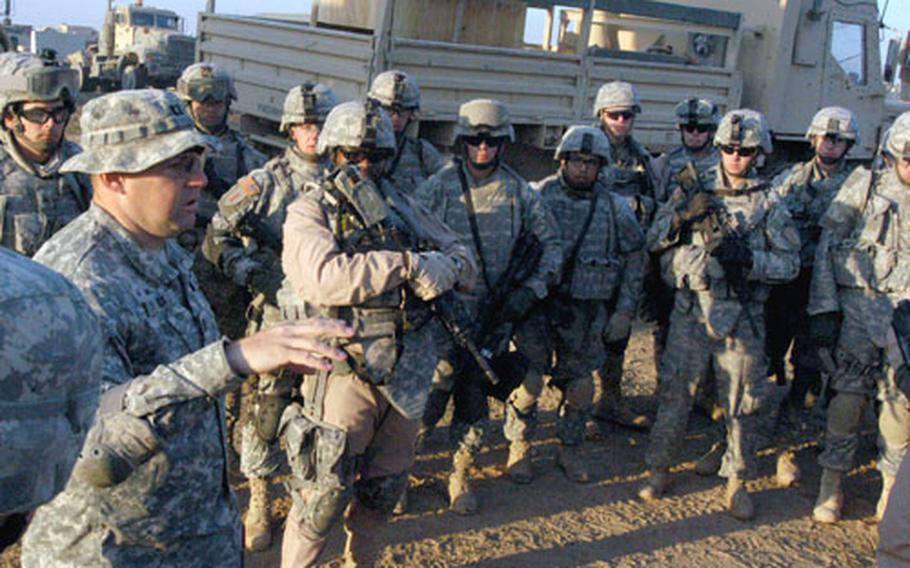 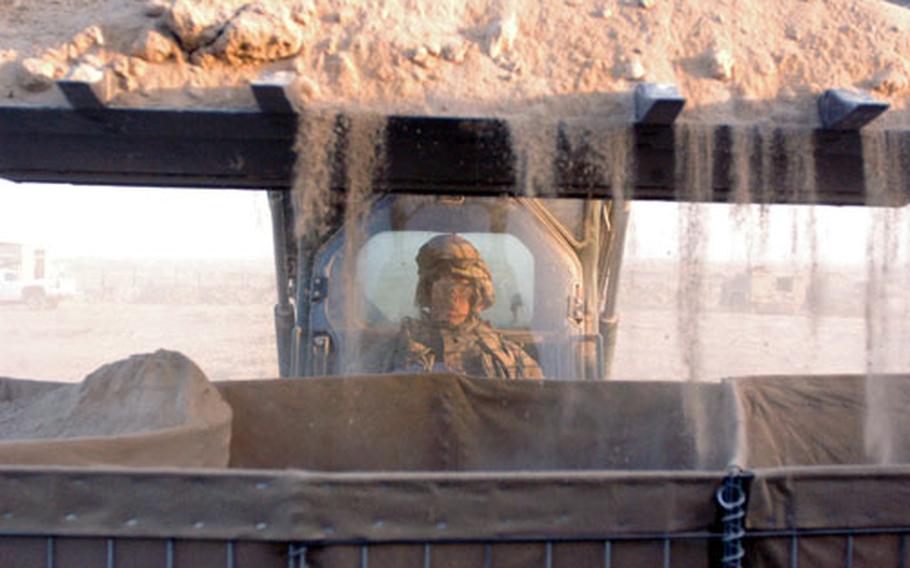 Spc. Miguel Espinosa with the 9th Engineer Battalion, of Yuba City, Calif., gets ready to dump a load of dirt from his Bobcat into a Hesco barrier being built on Thursday around the Iraqi police station in Zangora. (Charlie Coon / S&S)

ZANGORA, Iraq &#8212; It isn&#8217;t all beans and bullets. Building goes on every day in Iraq, such as when Pfc. Robert Baine lowered a concrete barrier into place.

In support of the long-held mantra &#8212; stand up the Iraqi security forces, so U.S. forces can stand down &#8212; troops from the battalion&#8217;s Company C spent Thursday doing construction in the dirt.

They worked to make safer an Iraqi police compound that was recently set up outside Zangora, a village about 10 miles west of Ramadi.

Almost one kilometer of razor wire was uncoiled and fastened atop a square-shaped dirt berm that surrounds the property. Dozens of Hesco barriers, which are like giant sandbags 5- and 8-feet tall, were unfolded and stretched out around several trailers, then filled with dirt by troops using bulldozers.

Sailors from Naval Mobile Construction Battalion 74 brought a generator and were working to hook up the trailers with electricity for lights, heat and air-conditioning.

It was a typical late-fall day in central Iraq, about 75 degrees under a completely blue sky, with neither a cloud in sight nor a blade of grass on the ground. Just dirt.

At midmorning, the troops are offered a glass of cold Sprite by their Iraqi hosts.

For about a half-hour around midday, hundreds of shots from different-caliber weapons could be heard in the distance. That&#8217;s typical as well for Iraq. It was hard to tell if it was a hostile firefight or just leisurely gunfire.

At lunchtime, troops broke open meals sealed in plastic and drank water under the warm sun. But it was not a time to forget where you were.

&#8220;Someone could be placing IEDs, there could be snipers,&#8221; said Spc. Miguel Espinosa, of Yuba City, Calif., while scanning the horizon behind his .50-caliber gun, up in the turret atop an armored Humvee. &#8220;They (the people working) are depending on you to keep security for them.&#8221;

Espinosa looked through binoculars at the edge of town, less than a half-mile away.

There was not a single interpreter at the site, and no verbal conversation between the Iraqis and Americans, just hand gestures. The top-ranking cop, a lanky and serious man named Major Salwan, watched the work with satisfaction.

That was not the only English words the cops had been taught by the troops. The younger ones smiled when reciting what they&#8217;d learned about criminals, which in Iraq are generically called Ali Babas.

During previous visits, the troops had pushed up dirt to form berms, built &#8220;crow&#8217;s nest&#8221; observation platforms, and placed concrete barriers to impede car bombers and other attackers.

Next time out, they planned to bring more barriers and hook up water service and latrines. Until Thursday, when the troops installed an outhouse, the Iraqi cops were just making do, so to speak, in the dirt.

Spc. Paul Burge of Kansas City, Mo., said he signed up for the military to serve his country. Now on his second deployment to Iraq, it&#8217;s more like a job, especially on days like this at a construction site.