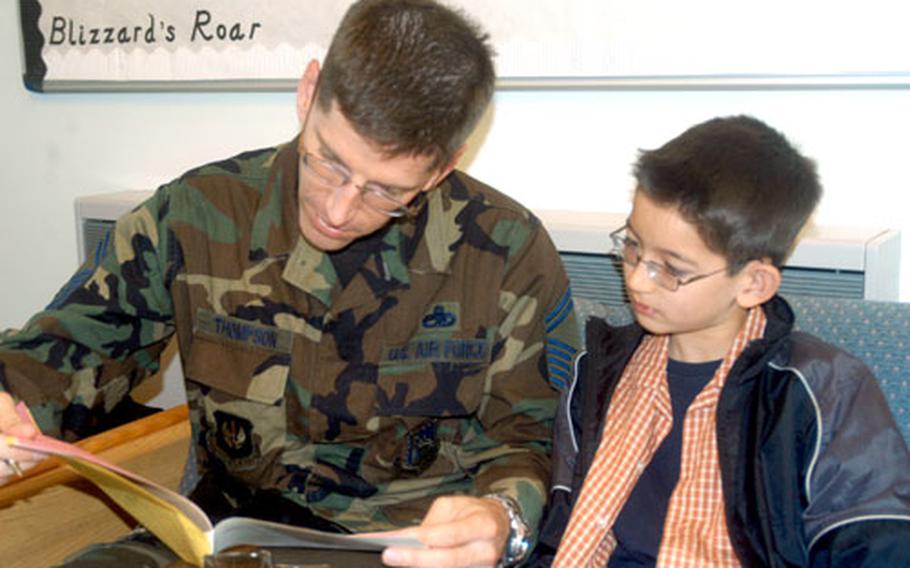 Senior Master Sgt. William Thompson fills in some last-minute registration paperwork at Liberty Intermediate School on RAF Lakenheath, England, for his son, Garrett, 9, who is in the fourth grade. (Ron Jensen / S&S)

About 39,000 students showed up for school Monday on the first day of classes, some 6,300 fewer than DODDS officials expected.

The biggest drop was in the Bavaria District, home to the Army&#8217;s 1st Infantry Division, where student enrollment had fallen nearly 17 percent short of projections. The Pentagon announced July 29 that some 1st ID troops already had begun to leave Europe. By next summer, the entire division is expected to move to Fort Riley, Kan.

In Kitzingen, enrollment at primary and intermediate schools comprising grades kindergarten through five fell about 30 percent below expectations, while W&#252;rzburg High School was off 38 percent.

The two Kitzingen schools are expected to close after this year, with all Army personnel at the bases scheduled to move by the middle of next year.

W&#252;rzburg High School Principal Walt Seely said the school is likely to wind up with fewer than 500 students this year, 150 less than last spring. DODDS had projected 725. The 1st ID&#8217;s headquarters staff is in W&#252;rzburg, but it will move to Fort Riley next year. Fewer replacement soldiers than usual arrived this summer, and many who did come didn&#8217;t bring families for their one-year mini-tour.

Some problems could be in the enrollment projections themselves. Thompson said DODDS customarily estimates them almost a year ahead of time to allow for plenty of planning and budgeting. This year, several large troop shifts became public just weeks or months before the school year started.

But transformation is not the only reason enrollments are lagging.

The Wiesbaden-based 1st Armored Division is scheduled to deploy this fall, as is the Heidelberg-based V Corps. While most families are staying in Germany, some 1st AD schools have taken big enrollment hits.

Enrollments are off 30 percent in Hanau, 35 percent in Gelnhausen and 36 percent in Neubruecke, all bases with a big 1st AD presence, DODDS officials reported. Overall, the Kaiserslautern and Heidelberg districts are about 9 percent below projections.

Transformation and deployments account for the low numbers at many Army bases. But officials in the DODDS Mediterranean District, which is dominated by Navy and Air Force bases, can&#8217;t explain why their enrollments are 13 percent short of plan.

The biggest gaps are in Incirlik, Turkey, and Naples and Sigonella in Italy, said Carl Albrecht, assistant superintendent of the district, leading some to speculate that some parents have not come over from the States yet.

&#8220;The fact that nobody, not even commanders, [is] saying to us that kids are gone, we are in the speculation zone that the ship comes home next week,&#8221; Albrecht said.

At Ramstein, DODDS&#8217; largest high school with nearly 1,000 students, a last-minute surge erased about two-thirds of an enrollment shortfall that a week ago stood at nearly 250. Barbara Ferg-Carter, Ramstein principal, said the school may now need to hire extra faculty.

Some of the low enrollment numbers may simply reflect computer error. DODDS-Europe is switching to a new centralized registration system this year, and administrators report conflicting numbers between headquarters and the district offices. The final enrollments may not be ready for several more weeks.