Youngsters from Halvorsen-Tunner Elementary/Middle School on Rhein-Main Air Base, Germany, frolic in the snow after being released early from school on Monday. (Raymond T. Conway / S&S)

Youngsters from Halvorsen-Tunner Elementary/Middle School on Rhein-Main Air Base, Germany, frolic in the snow after being released early from school on Monday. (Raymond T. Conway / S&S) 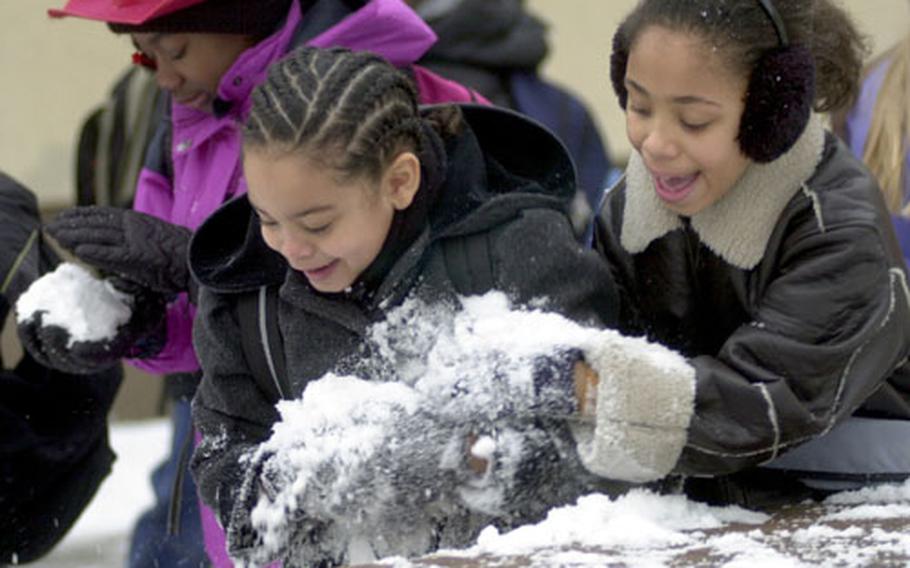 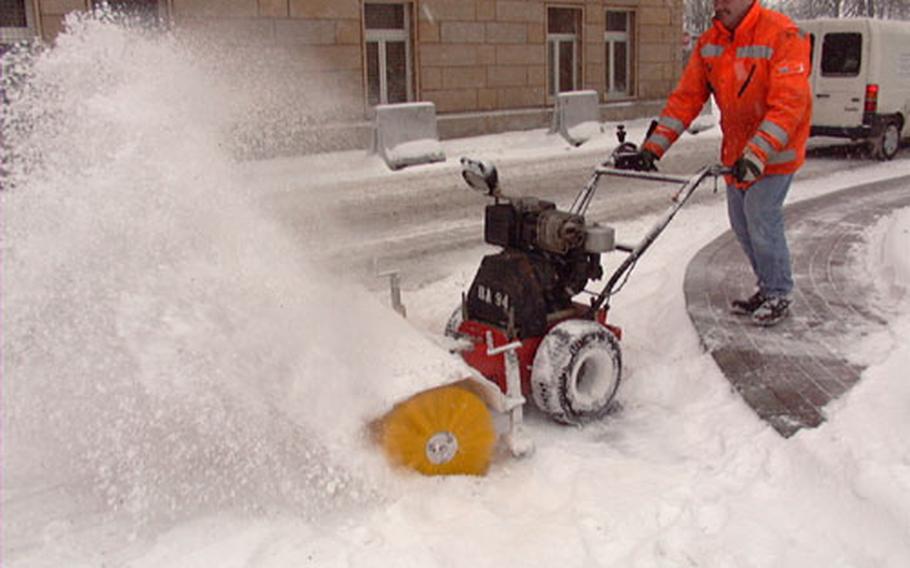 A Bamberg road crew worker clears snow from a street crossing Monday on Warner Barracks. By midday, Bamberg had about two inches of snow on the ground, but road crews kept things under control and no school delays or closures were reported. (Raymond T. Conway / S&S)

A winter storm of snow and freezing rain led some Defense Departments schools in Germany to close early Monday, with some areas receiving several inches of accumulation.

The snow, however, isn&#8217;t expected to linger very long.

For the remainder of the week, daytime temperatures in central Germany should remain above freezing as a gradual warming trend takes hold, said Master Sgt. Klaus Lammers, a forecaster with the U.S. Air Forces in Europe Operational Weather Squadron.

The winter storm, which Lammers and his colleagues had been tracking for a few days, swept through central Germany early Monday morning. Snowfall varied from community to community, with heavier amounts reported in south and southeastern Germany.

Ramstein Air Base, for example, received 1&#189; inches of precipitation as of 3 p.m., while some areas in the Grafenw&#246;hr-Hohenfels region got socked with as much as 8 inches of snow.

In many locations, the morning snowfall turned to freezing rain, a development that led several communities to bring an early end to the school day. Students in Wiesbaden, Dexheim, Babenhausen, Mann-heim and Heidelberg were among those who ate lunch at home.

Bad Nauheim Elementary School never opened Monday because of emergency repairs to its central heating system, which failed over the weekend.

&#8220;They&#8217;re hoping to restore the heat by this afternoon,&#8221; said Terry Emerson, chief of staff for the Heidelberg School District.

The schools weren&#8217;t the only places that shut down early.

Army officials in Heidelberg began closing the community&#8217;s main shopping center, which includes the post exchange and commissary, at around 1 p.m. Other communities took similar precautions, such as sending office personnel home early to beat the ice storm and evening rush hour.

At Rhein-Main Air Base, students were sent home early, but base and flight operations continued unabated.